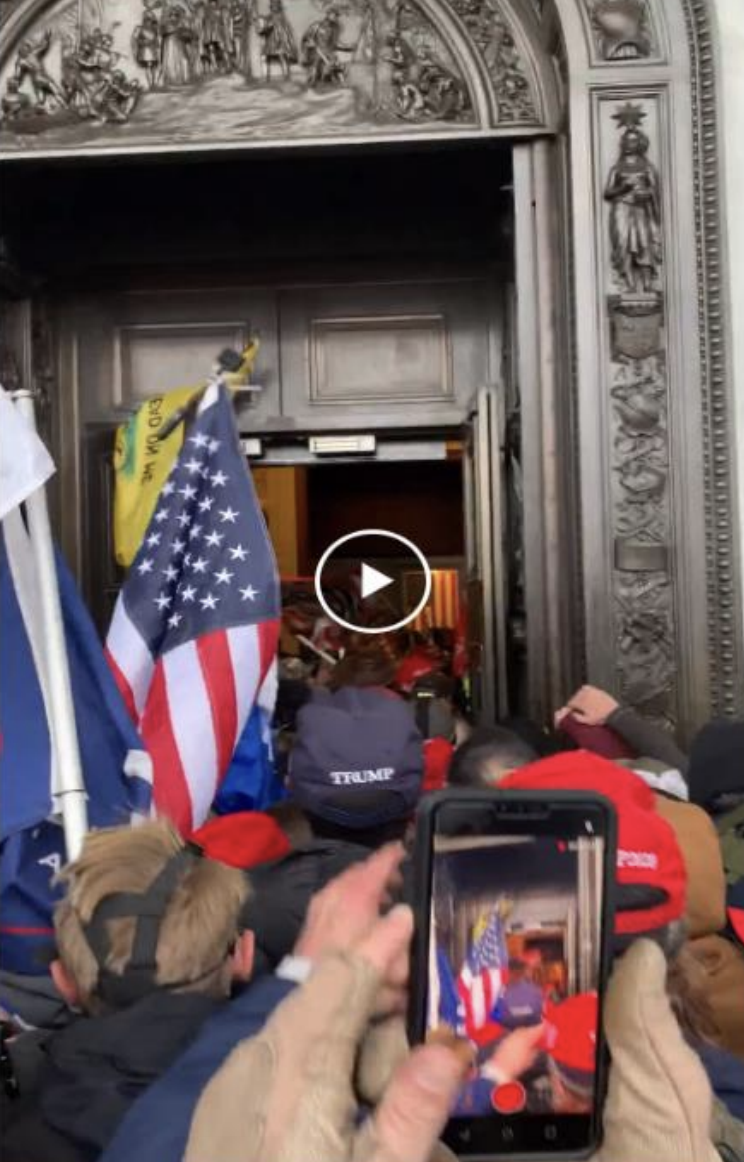 In a motion arguing that accused Oath Keeper Jason Dolan should be held without bail, the government accuses Dolan of inventing an alternative story to explain how the East doors of the Capitol got opened on January 6.

Many of these detention motions aren’t all that convincing about the danger of the defendant; I find this one to be. The government shows the three gun cases that Dolan and fellow Floridian Kenneth Harrelson stashed at the Ballston Comfort Inn before the insurrection. 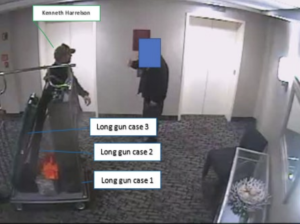 The government explains that Dolan spent a decade as a marksmanship instructor while serving as a Marine and that Dolan appears to have hidden at least two guns that his neighbor said he owned in advance of being arrested.

The motion describes that Dolan and Harrelson were “near” the Capitol on January 5, which the government suggests was, “likely to conduct surveillance for their operation the following day.”

It describes how, after busting into the Capitol, Dolan, Harrelson, and Kelly Meggs spent six minutes outside Nancy Pelosi’s office (note, I think the government misleadingly suggests this photo came from Harrelson or Meggs). 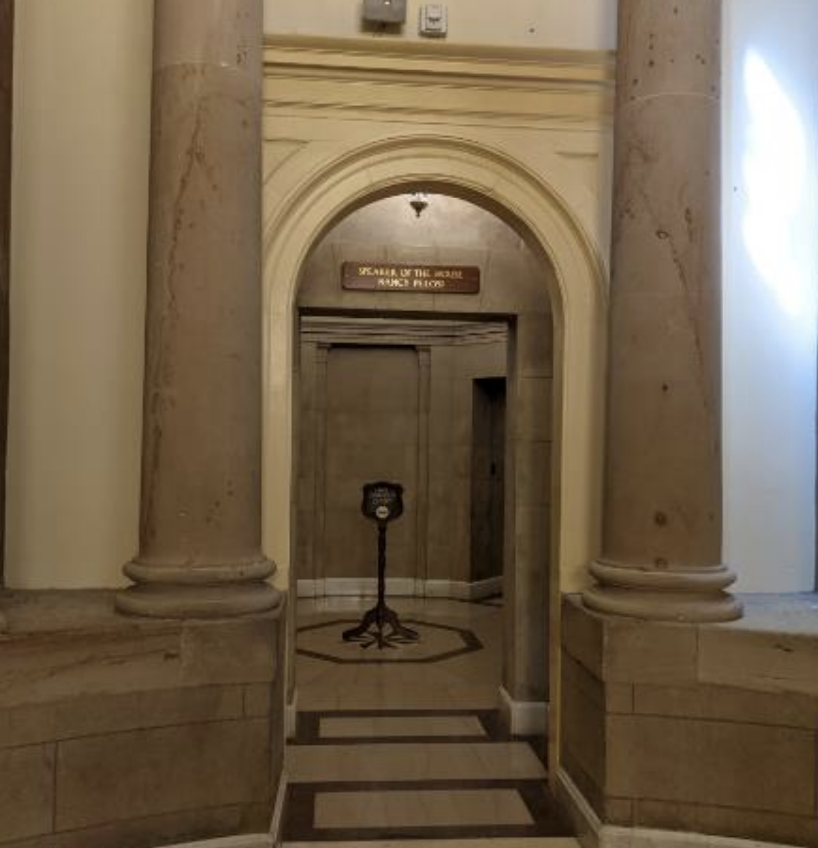 Hours later, Meggs talked about how “we” had looked for Pelosi. 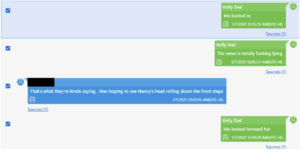 The government also shows that the attorney that Dolan shares with the former President, Michael Van der Veen, was wrong when he claimed there was no ongoing contact between Dolan and the Oath Keepers; Dolan and Harrelson were in communication via Signal leading up to Harrelson’s arrest.

But that’s not the most interesting part of the detention motion.

The government argues that Dolan is the source for this Gateway Pundit story, which was set up with the involvement of the Oath Keeper’s PR attorney, Kellye Sorelle (and so would constitute another recent contact with the Oath Keepers to prove Van der Veen wrong). They point to this video seized from Harrelson’s phone, showing the person in front of him, whom other pictures identify as Dolan, taking a picture of the just-opened East door. 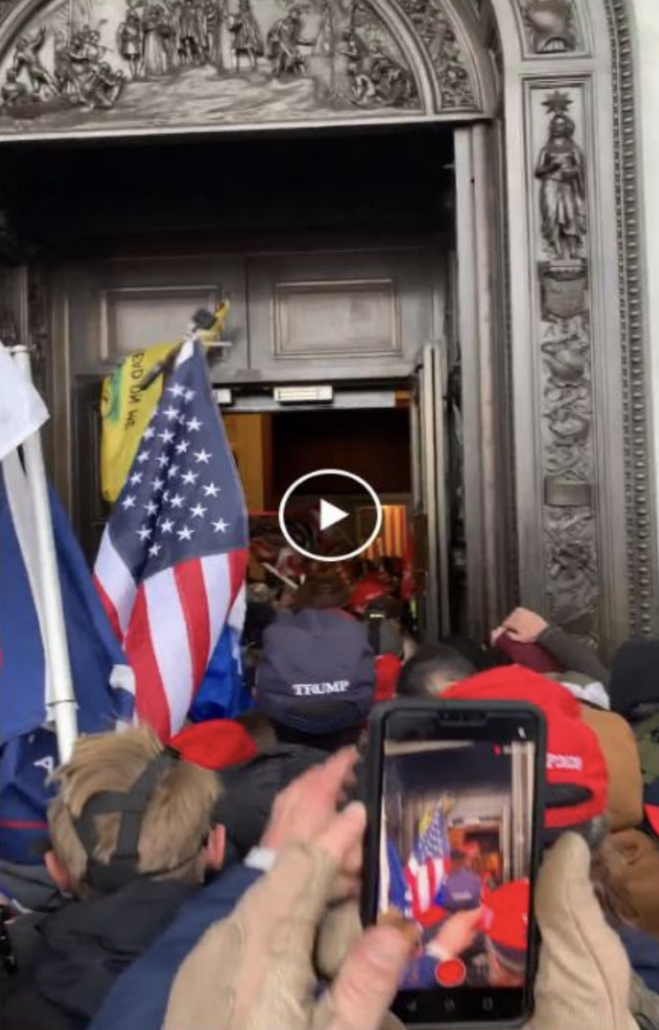 That’s almost exactly the picture that shows up in the Gateway Pundit article. 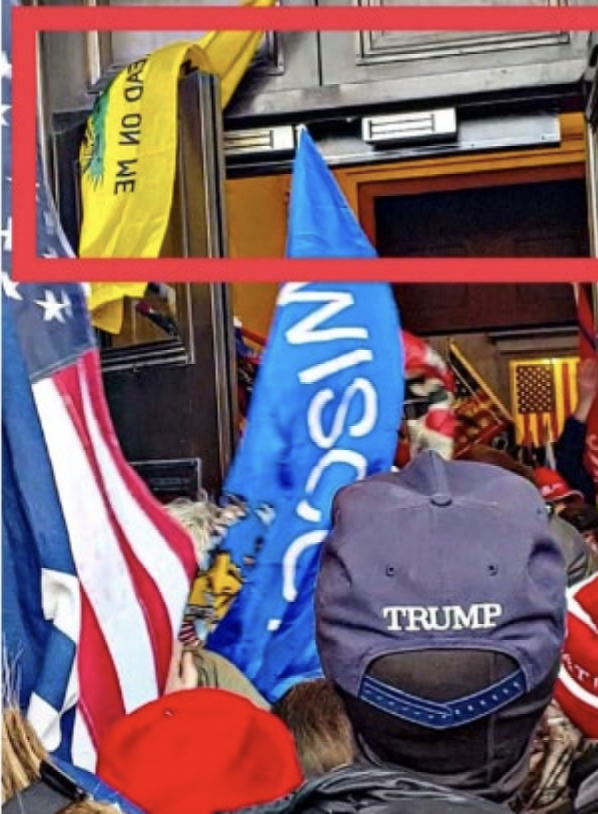 That makes the intent of the Gateway Pundit story more interesting. It claims that the existing explanation for how the East doors got opened is that a Marine Major “went inside and managed to run around and open up the doors.”

The point of the story is to argue — based on the source’s experience working at US Embassies overseas, which Dolan did — that it would be impossible to open doors secured by magnetic locks. That’s not true: for safety reasons it has to be possible to open such doors from the inside, which is what the government claims did happen.

It’s how Dolan inserts Marine Major Christopher Warnagiris into the story, claiming that Warnagiris opened the doors from the inside, that I find particularly interesting.

That’s not what he is alleged to have done though. Warnagiris is alleged to be the first person in the East door, as if he knew — standing there on the Capitol steps fifteen feet in front of where Dolan was standing at the same time — that they would be opened. 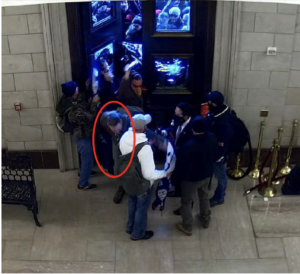 Then Warnagiris prevented the cops from closing the doors once they had been opened, all the while helping others (which would hypothetically include the Stack that Dolan entered with) get in. 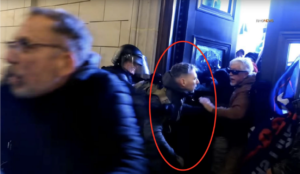 Without the tie to Warnagiris, this story would seem like nothing more than a ham-handed attempt to claim that the Stack could not have “broken” in, because to open the magnetic doors, someone would have had to have let them in. Maybe that’s all it is.

But the story serves as much to obscure what fellow Marine Warnagiris did as what Dolan and the rest of the stack did. Given that both Marines seemed to know those doors would open, I find that an interesting story to tell. 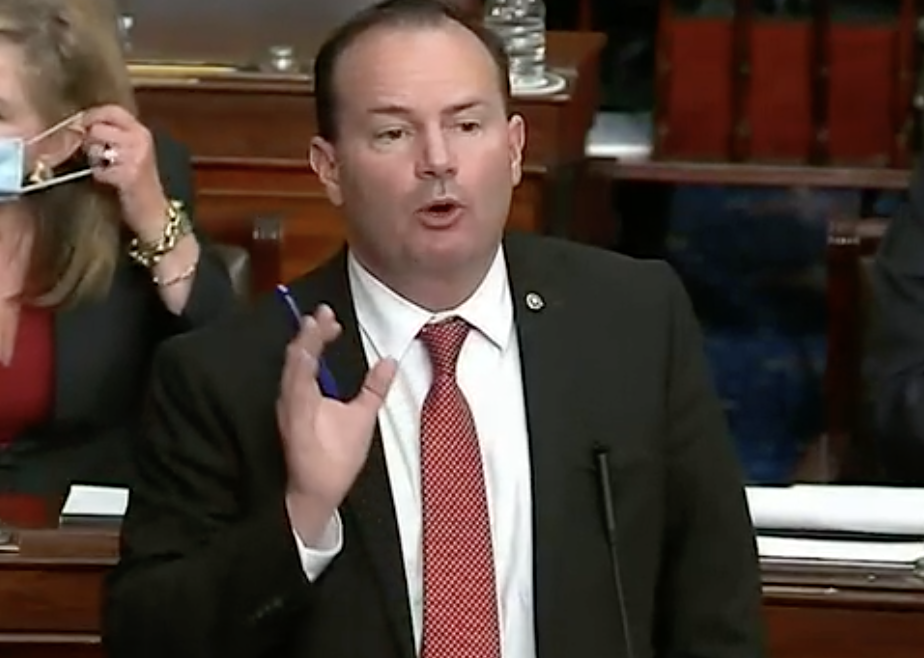 Because Donald Trump’s Personal Injury lawyer, Michael Van der Veen, made a specious argument about the First Amendment to successfully give 43 Republicans cover to vote to acquit the Former President in his impeachment trial, the discussion about Trump’s potential criminal exposure for January 6 (which according to CNN he is concerned about) has largely focused on incitement charges.

That’s true even though the trial led Mike Lee to offer up evidence implicating Trump in the same conspiracy charges already charged against 10 defendants: conspiring to delay Congress’ official proceeding to certify the electoral college vote. As I have noted, DOJ has started mapping out conspiracy charges against both the Oath Keepers and the Proud Boys:

While there are differences in the scope of the conspiracy and overt acts involved, all three charging documents charge defendants with conspiring “to stop, delay, and hinder Congress’ certification of the Electoral College vote,” effectively conspiring to commit 18 USC 1512, tampering with the official procedure of certifying the electoral college vote, an official procedure laid out in the Constitution.

And in spite of their votes to acquit the Former President last night, both Tommy Tuberville and Mike Lee provided evidence that the FBI might use to investigate Trump in that conspiracy. As I noted days after the attack, during the attack, Trump twice attempted to reach out to Tuberville to ask him to delay the count. The second time, Rudy Giuliani even left a message specifically asking for a delay as such, precisely the object of the already charged conspiracy charges.

I know they’re reconvening at 8 tonight, but it … the only strategy we can follow is to object to numerous states and raise issues so that we get ourselves into tomorrow—ideally until the end of tomorrow.

I know McConnell is doing everything he can to rush it, which is kind of a kick in the head because it’s one thing to oppose us, it’s another thing not to give us a fair opportunity to contest it. And he wants to try to get it down to only three states that we contest. But there are 10 states that we contest, not three. So if you could object to every state and, along with a congressman, get a hearing for every state, I know we would delay you a lot, but it would give us the opportunity to get the legislators who are very, very close to pulling their vote, particularly after what McConnell did today. [snip]

Over the last few days, both Tuberville and Lee offered up more details on the earlier call. Tuberville confirmed the content of the call, including that he told the President that his Vice President had been evacuated.

Sen. Tommy Tuberville revealed late Wednesday that he spoke to Donald Trump on Jan. 6, just as a violent mob closed in on the the Senate, and informed the then-president directly that Vice President Mike Pence had just been evacuated from the chamber.

“I said ‘Mr. President, they just took the vice president out, I’ve got to go,’” Tuberville (R-Ala.) told POLITICO on Capitol Hill on Wednesday night, saying he cut the phone call short amid the chaos.

And Lee — who twice demanded that references to this call be removed from the Congressional record — ultimately provided phone records showing that even after Pence had been publicly rushed to safety, Trump was still working on delaying the vote rather than addressing the danger. Trump tweeted about Pence at 2:24, specifically complaining that Pence hadn’t given states a chance to “correct” facts, effectively a complaint that Pence had not disrupted the orderly counting of the vote.

Mike Pence didn’t have the courage to do what should have been done to protect our Country and our Constitution, giving States a chance to certify a corrected set of facts, not the fraudulent or inaccurate ones which they were asked to previously certify. USA demands the truth!

And then, two minutes later, Trump attempted to call Tuberville and, after Lee turned over his phone to the former coach, spoke to him for four minutes. It matters that Tuberville told Trump about the evacuations, though it is highly unlikely he had not been informed both informally and formally at that point. But it matters just as much that even after the insurrectionists had breached the building, Trump took two overt acts to attempt to delay the vote.

A Trump defense might argue — as his Personal Injury Lawyer did this week — that he was just trying to count the votes, but Trump had already made an unconstitutional request of Mike Pence, something Trump’s team provided no defense for. And that’s before you consider the evidence that Rudy, at least, was in direct contact with James Sullivan, who is affiliated with the group, the Proud Boys, that has already been accused of conspiring to breach the Capitol (indeed, another conspiracy case, against Proud Boys Dominic Pezzola and William Pepe, charges that they conspired to interfere with cops trying to keep protestors out of the Capitol, and the Chrestman indictment also includes that as a separate conspiracy).

I’m not saying this will definitely happen. The bar to charging a Former President remains high.

But DOJ has already charged ten people for doing what Trump was also demonstrably doing that day. And, partly because of Mike Lee’s desperate effort to avoid having the record of him implicating Trump in the congressional record, Lee ended up making the timeline of the events public without the FBI having to breach speech and debate concerns to obtain it. By doing so, Lee made it easier for the FBI to make a case against Trump if they ever attempt to do so.

Mike Lee may have helped prevent Trump from being barred from running for President again. But Mike Lee also made it easier to prosecute Trump for those very same acts.

Update: NYT just posted a story showing that six of the Oath Keepers Roger Stone was palling around with leading up to the attack entered the Capitol on January 6.