I had a pretty revelatory experience last night interacting with a bunch of self-identified libertarians about alleged violence in Lansing yesterday and so-called Right to Work. I asked several of them why they were supporting a bill that should be anathema to libertarian principles. Here’s a more coherent version of the argument I made.

I also consider the restrictions right-to-work laws impose on bargaining between unions and businesses to violate freedom of contract and association. So I’m not cheerleading for the right-to-work law just passed in Michigan, which bans closed shops in which union membership is a condition of employment. I’m disappointed that the state has, once again, inserted itself into the marketplace to place its thumb on the scale in the never-ending game of playing business and labor off against one another.

The ideal role for the government in business-labor relations is to stay the hell out of it and let the parties work things out themselves. I may preferone outcome or another, but I don’t have the right to enforce it by law, and that’s what right-to-work legislation does.

While I don’t embrace that view, it is the stance I would expect true libertarians to adopt. I’m gratified a couple of libertarians weighed in and pointed out the inconsistency of the arguments my interlocutors were making, which at least caused them some confusion (and led one to admit he would freeload on taxes if it were not for fear of legal repercussions).

One thing these self-identified libertarians kept coming back to, however, was alleged union coercion. They don’t want to be coerced into joining a union, paying dues or representation fees. These people at least pretended to be adamantly opposed to coercion.

Which is why this detail of Michigan’s union-busting is an important part of the narrative.

Michigan Senate Minority Leader Gretchen Whitmer, a Democrat told MSNBC that some of her Republican colleagues complained to her privately that DeVos was twisting their arms over the anti-union legislation.

“I spoke with someone in Republican leadership who was angry because these heavy-handed tactics were being used with the members,” she said. Republicans told her, she said, that DeVos had “threatened primaries, threatened to spend whatever it takes to beat them if they don’t support these bills.”

It’s not just Gretchen Whitmer saying this. Detroit Free Press said it specifically about Randy Richardville, who flipped his position on RtW.

Certainly, there are a large number of Michigan legislators who are beholden to Americans for Prosperity, or the Koch brothers. Word is the groups threatened Senate Majority Leader Randy Richardville’s leadership post, and promised him a primary challenge in 2014, if he refused to move right-to-work forward.

And Tim Skubick named DeVos too.

Having performed the 180, Mr. DeVos ramped it up. He told senators that if they don’t vote for this thing, he would launch a petition drive to place this before the voters.

Recall that Mr. DeVos spent $35 million of his own money to beat Gov. Jennifer Granholm, (money wasted). Legislators on the other end of his phone calls knew he has the deep pockets to not only gather the required signatures, but also to find a way to sell it to the voters.

Folks in MI are fairly clear about one thing: a billionaire who was soundly defeated by voters in 2006 has instead brought about a radical change in the state’s law by coercing people, precisely the kind of thuggishness “Right to Work” supporters claim unions engage in.

“Right to Work” supporters insist that no one should feel like their job depends on capitulating to coercion about who or what to support.

Except that Dick DeVos and his thuggish special interest group friends used precisely that kind of coercion to cram this law through. Randy Richardville, among others, was told his job depended on supporting policies and groups he otherwise wouldn’t support.

I guess libertarians like the kind of thuggishness billionaires engage in? 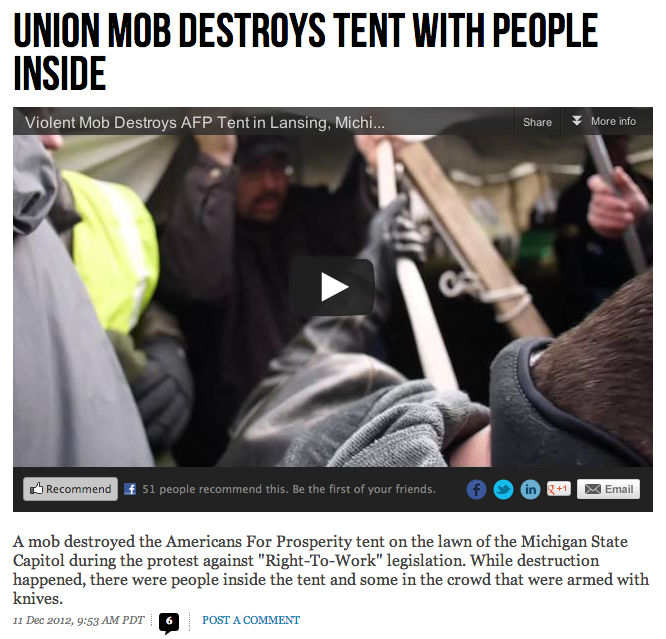 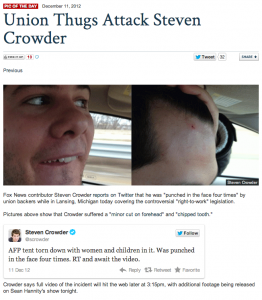 END_OF_DOCUMENT_TOKEN_TO_BE_REPLACED

Michigan’s Democratic Senators and Congressmen met with Governor Snyder this morning to urge him either to veto the so-called Right to Work bill, defer its passage until next term, or take the appropriations out that would make the law referendum-proof.

On a conference call describing their meeting, their chief message served to rebut Snyder’s claimed reasons to pass RtW–that he wanted to “get beyond” this issue and that RtW would help jobs. Discussing this bill as a “right to work cliff,” Carl Levin said that if this passed, the Governor “will allow us to plunge into endless strife.” And it would do so, Senator Levin noted, after labor and corporations have achieved more cooperative relations of late (presumably a reference to the auto industry).

But the most interesting point that Senator Levin made–which his brother, Congressman Sander Levin elaborated on–is that Snyder doesn’t understand how unions work. “The Governor in his statement [last week] said it incorrectly” Sandy said, when he suggested workers would lose their job if they didn’t join a union. “And today I still don’t think he understands.” Sandy continued. Congressman Levin went on to remind that the principle that workers could not be forced to join a union has been enshrined since he and then-Governor George Romney negotiated collective bargaining law back in 1965.

Now, in accusing Snyder of not understanding how unions work, I guess the Democrats wanted to do two things: treat his obviously false excuse for passing this as a good faith statement, and then to correct the lies that false excuse was based on. But also to shift the blame for the labor unrest that will come as a result of this law onto the Governor; because he went along with what Carl Levin called a “parliamentary gimmick” that will push this through as referendum-proof, Snyder will be responsible for the negative effect this will have on Michigan’s economy.

I don’t know whether that will work or not. But one thing I didn’t hear is a criticism of Snyder’s vision for Michigan. Making MI a RtW state effectively embraces a vision of the state as Indiana or Mississippi or Bangladesh. Making MI a RtW state embraces the idea that we should be dumb labor, not innovative technology, just another entry in the race to be the cheapest, most desperate state.

I’m glad such key participants as Sandy Levin schooled Snyder on the last 50 years of MI history and what that history means for Snyder’s decision tomorrow. But ultimately we need to be calling Snyder out for his terrible vision for the future of MI.

Update: I’ve added an MSNBC appearance by State Rep Tim Greimel (from Auburn Hills, where Chrysler is located). It’s one of the better descriptions of what what RtW does I’ve seen.