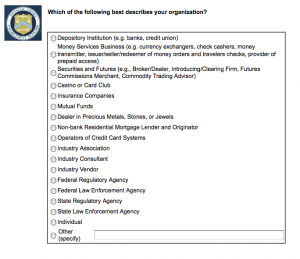 The other day, I noted how–days after his department reported that suspected bankster crimes are growing quickly and terrorist financing crimes are going down–Treasury Department fired FinCEN head, Jim Freis. Given some of the reporting describing the firing, which explained that Treasury wanted to focus on things like terrorist financing whereas Fries had been focusing on things like mortgage fraud, I wondered whether Treasury fired Freis, in part, for showing that the emphasis on terrorism resulted in the neglect of bankster crimes.

Today, FinCEN sent out notice of a survey to determine how useful that report and another yearly report–on Tips and Trends–they produce are (note, the email notice says an invitation to the survey is here, but as of 8:15 it is not).

As a subscriber to e-mail updates from the United States Department of Treasury’s Financial Crimes Enforcement Network (FinCEN), FinCEN invites you to participate in a survey assessing the value of two of our recurring publications:  The SAR Activity Review-Trends, Tips & Issues and The SAR Activity Review-By the Numbers.  This invitation has been sent to you in follow up to FinCEN’s prior e-mail notification.  A copy of that notice and this invitation can be found on FinCEN’s official website at http://www.fincen.gov/hotTopics.html

To participate in this completely voluntary survey, please click on the following link: https://svy.cfigroup.com/cgi-bin/qwebcorporate.dll?idx=HWGKEN   Please note that this link will direct you to a website hosted by the CFI Group, which FinCEN has commissioned to conduct this survey.  FinCEN has obtained permission from the Office of Management and Budget through control number 1090-0007 to conduct this survey in accordance with the Paperwork Reduction Act (44 U.S.C. § 3501-3520) and its implementing regulations (5 C.F.R. Part 1320).

Through the survey, we hope to learn more about your needs and identify opportunities to improve these products.  The results of the survey will be reported to FinCEN only in the aggregate; individual responses will be grouped anonymously along with those of other FinCEN customers.

END_OF_DOCUMENT_TOKEN_TO_BE_REPLACED

Things for anti-Qaddafi forces in Libya have gone from difficult to worse. Yet even after Director of National Intelligence James Clapper made the mistake of telling the truth about Qaddafi’s strength, there has been little discussion about this report from James Risen and Eric Lichtblau (one exception is Dan Drezner).

Here’s part of what Clapper said (the White House has backed away from his comments and Lindsey Graham has called for his resignation for telling the truth).

“Over time I think the regime will prevail,” acknowledged Clapper. “With respect to the rebels in Libya, and whether or not they will succeed or not, I think frankly they’re in for a tough row.”

Clapper added he did not believe Kadhafi, who has earned a reputation as a maverick, planned to step down after more than four decades in power.

“I don’t think he has any intention of leaving,” Clapper said. “From all evidence that we have, which I’d be prepared to discuss in closed session, he appears to be hunkering down for the duration.”

Libyan air defenses, including radar and surface-to-air missiles, are “quite substantial,” Clapper explained.

“A very important consideration here for the regime is, by design, Kadhafi intentionally designed the military so that those select units willed to him are the most luxuriously equipped and the best trained.”

With that assessment–which was echoed in testimony by the head of DIA–in mind, consider Risen and Lichtblau’s description of the way Qaddafi has prepared himself financially to weather a rebellion. They describe that he has hoarded away “tens of billions” in Libya which will make the financial sanctions we’re using against him pretty useless.

The money — in Libyan dinars, United States dollars and possibly other foreign currencies — allows Colonel Qaddafi to pay his troops, African mercenaries and political supporters in the face of a determined uprising, said the intelligence officials, speaking on the condition of anonymity.

The huge cash reserves have, at least temporarily, diminished the impact of economic sanctions on Colonel Qaddafi and his government. The possibility that he could resist the rebellion in his country for a sustained period could place greater pressure for action on the Obama administration and European leaders, who had hoped that the Libyan leader would be forced from power quickly.

In other words, in addition to the tens of billions in assets Europe and the US have frozen, Qaddafi has still more loot available within his country, inaccessible to international sanctions. And that is one thing (the superior Russian arms he has that Clapper mentioned are another) that will allow Qaddafi to wait out the rebels.

Take a step back and think about the implications of this.

According to the story, Qaddafi probably started hoarding money in the 1990s. After the West lifted sanctions on Qaddafi in 2004, the process accelerated.

He has built up Libya’s cash reserves in the years since the West began lifting economic sanctions on his government in 2004, following his decision to renounce unconventional weapons and cooperate with the United States in the fight against Al Qaeda. That led to a flood of Western investment in the Libyan oil and natural gas industries, and access to international oil and financial markets.Colonel Qaddafi, however, apparently feared that sanctions would someday be reimposed and secretly began setting aside cash in Tripoli that could not be seized by Western banks, according to the officials. He used the Libyan Central Bank, which he controls, and private banks in the city. He also directed that many government transactions, including some sales on the international oil spot market, be conducted in cash. “He learned to keep cash around,” said the person with ties to Libyan government officials, who asked to remain anonymous for fear of putting them in jeopardy.

Then, in the weeks before the uprising broke out in Libya, Qaddafi continued to move money around to keep it accessible.

And with it, he is able to outfit and pay his elite troops, mercenaries from other countries, and loyal supporters. He can let oil just sit in the ground (as it did during the previous sanction period), because he doesn’t need to sell oil immediately to get money.

Because Qaddafi managed to loot shrewdly, he is largely immune from our non-military efforts to prevent him from committing genocide against his own people. His looted riches make him the match of most of his country, even backed by the international community.

And the thing is, we knew Qaddafi was doing this looting. END_OF_DOCUMENT_TOKEN_TO_BE_REPLACED