Three Things: CRC—What? An Indictment, Plus Shut Downs Ahead

Brett Kavanaugh’s nomination and confirmation process is an 800-pound gorilla in the media, as is the potential for the obstructive removal of Rod Rosenstein as Deputy Attorney General. They suck up enormous amounts of mental wattage, sitting wherever they want to sit.

Here are three things which are in some way related and worth more of our attention, whatever is left after the gorillas are done with it.

CRC: One degree from Manafort 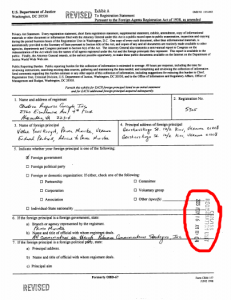 What a small, small world.

Should note CRC’s registration was after the fact — they were contracted for April-October 2003. Why so late?

Didn’t see this until late last night: DOJ indicted Kemal “Kevin” Oksuz (pdf) on one count of hiding or falsifying material facts and four counts of making false statements to the U.S. House of Representatives Committee on Ethics. The filings were related to a Congressional trip to Azerbaijan ultimately paid for by State Oil Company of Azerbaijan Republic (SOCAR), the wholly state-owned national oil and gas company of Azerbaijan.

Oksuz is now a fugitive.

Ten members of Congress and 32 staffers traveled in 2013 to attend a U.S.-Azerbaijan convention in Baku after Azerbaijan had asked Congress for an exemption from sanctions on Iran for a $28 billion natural gas pipeline project. The members and staffers were later cleared as it appeared they believed the trip’s funding was provided by Oksuz’s nonprofit organization.

Personally, I think those members and staffers needed a rebuke. Nonprofits don’t print money; they rely on money from donors. Follow the money to the donors before accepting a trip and incidentals. It’s not rocket science.

Worth keeping in mind the Trump International Hotel & Tower built in Baku, overseen by Ivanka Trump, which burned in late April this year — an amazing two fires, same day. What are the odds?

Shutdowns Ahead: U.S.-Canada and U.S. Government?

Doesn’t look like negotiations between the U.S. and Canada are going to make this Saturday’s deadline. No idea what will happen after that. We all know the Trump administration has been at fault; how could anybody screw up a long-term peaceful relationship like U.S.-Canada, our second largest trading partner after China, without deliberate bad faith? Without the intent to screw over another NATO member’s economy?

And the U.S. government itself faces a budget deadline. If the “minibus” budget bill isn’t signed by midnight this coming Sunday we’re looking at a shutdown and it appears the bottleneck may be Trump. The jerks at Breitbart are fomenting to encourage a shutdown by insisting Trump refuse to sign the bill — they’re just plain malicious, thinking not at all about the impact on fellow Americans or the economy.

Putin must be laughing his ass off at how easily the GOP’s white nationalist base has subverted U.S. and NATO stability by giving up control to a mobbed-up, golf-addicted, attention-deficient wig.

Don’t miss Marcy’s interview on Democracy Now in which she talks about Rod Rosenstein’s status and the Kavanaugh confirmation process.

Treat this like an open thread — have at it.

p.s. A note on site operations: Please be sure to use the same username and email address each time you log into the site. It makes it easier for community members to get to know you. Deliberate sockpuppeting is not permitted.