January 6: A Change of Pace

Although GWU’s tracker, which is still the best way to keep track of all the January 6 defendants (though this visual story from WaPo using their data is nifty) added four new January 6 defendants yesterday, the pace of new defendants has slowed considerably. While there are still some detention fights, several of those disputes (Proud Boys Ethan Nordean and Joe Biggs, and disorganized conspirators Nate DeGrave and Ronnie Sandlin, as well as Neo-Nazi sympathizer Timothy Hale-Cusanelli — have moved to the DC Circuit.

We’re likely to have more bail revocation fights. The other day, for example, Landon Copeland — who made news for his meltdown during a magistrate judge’s hearing last week — was arrested for some still unidentified bail violation. The government has also moved to revoke Patrick Montgomery’s bail because he — a professional hunting guide — shot a mountain lion that he — a felon — cannot legally possess.

But there are a couple of developments this week that point to what’s going on with this investigation.

In a hearing in the case against mother and son defendants Deborah and Salvador Sandoval, Deborah’s attorneys were anxious to move to trial based off an apparent misunderstanding that the evidence on her sole computer device, her smart phone, would show she barely entered the Capitol. Meanwhile, the government revealed that because Salvador chose not to share passwords to his multiple devices, those are taking a lot longer to exploit. As I’ve already noted, Ethan Nordean is the only Proud Boys leadership co-conspirator whose phone DOJ was able to exploit without cracking the password first (the FBI got the password from Nordean’s wife). Exploiting all these phones is going to take a lot of time.

In another case, there appear to be privileged communications on Eric Torrens’ phone, which will delay the exploitation of that for up to four weeks as a filter team reviews the content.

In other words, even before you consider any delay created by FBI’s need to respond to Signal’s Moxie Marlinspike’s exposure of vulnerabilities in Cellebrite’s code, it will take some time to process the vast volume of evidence the government has obtained since January 6.

The arrest of Brittiany Dillon gives a sense of another cause of delay.

Bryan Betancur was one of the first wave of January 6 defendants to be arrested, on January 17, after his parole officer alerted the FBI that he had lied about handing out Bibles to get permission to travel from Baltimore to DC that day. The government got a warrant for his phone on January 20. Once they got into his phone, they discovered text messages between Betancur and Dillon in which Dillon described falling in the door of the Capitol during the riot. The government found video of her — falling down as she entered — on surveillance videos by January 23. The government obtained phone and Google warrants to confirm that Dillon had been inside the Capitol the day of the riot. For some reason, the FBI only got around to interviewing Dillon’s father, ostensibly about Betancur, on April 21; the agent got Dillon’s father to confirm Dillon’s ID while they were talking.

This is similar to what happened with Patrick Montgomery, who like Betancur was arrested on January 17. Only after FBI exploited his phone and found some key pictures did they arrest a buddy he was with that day, Brady Knowlton, while pursuing two others.

These arrests of friends of early arrestees may reflect an FBI agent trying to get arrest numbers, but in a number of cases, they seem to reflect larger investigative strategies based on things investigators have found in the profiles of the original defendant. By my count there are about 18 cases of network arrests aside from the militia conspiracies, and about half of those look like they may be more interesting than friends getting scooped up together. I would expect to see more of this going forward.

The two month delay between the time DOJ identified active duty Marine, Major Christopher Warnagiris, as the person who played a key role in keeping the East door of the Capitol open after it was first breached on January 6 and when they arrested him on Wednesday is far more interesting. 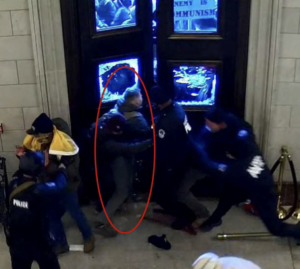 As the arrest affidavit explains, FBI isolated Warnagiris as a suspect based on his conduct as shown in video, and then published a Be On the Lookout picture to figure out who he was. On March 16, a former co-worker IDed him, and on March 17, the FBI interviewed one of his current co-workers, who positively IDed Warnagiris.

And that’s it–that’s where the narrative in the affidavit, which was signed on Wednesday, ends. They get a BOLO-based tip on March 16, and get military witnesses to confirm his ID on March 17. And that’s all they’re telling us about who he is and what other evidence they have against him.

I’m sure that’s not all that has transpired since FBI discovered an active duty Major played a key role in keeping the East Capitol breach open.

All the while, someone who by dint of being an active duty service member has clearance, has (as far as we know) been going into Quantico every day for the almost two months since they IDed him. That’s … an interesting investigative decision.

Compare that narrative to the one told in the arrest affidavit of Timothy Hale-Cusanelli, the Army reservist and Nazi-sympathizer who worked as a contractor at Naval Weapons Station Earle in New Jersey. On January 12, an informant told the FBI that Hale-Cusanelli was at the riot, on January 14, the informant recorded a conversation in which Hale-Cusanelli admitted to pushing and shoving along with the rest of the mob. Hale-Cusanelli has been jailed since the very next day, January 15 (he is appealing his detention to the DC Circuit). Hale-Cusanelli has not been charged with assault and he is not known to have played such a key role in compromising the Capitol from a second side.

Now, for many defendants, I can see taking your time after the initial rush of arrests. After all, if they were going to delete their Facebook, that would have happened (and did happen, with a goodly number of defendants) by January 9. But Warnagiris seems like a more urgent risk.

And, remarkably, DOJ apparently did not ask for any special conditions on Warnagiris. He has no location monitoring, no restrictions on possessing a gun, no specificity to his travel around DC (most defendants have stay-away orders, but for people like Warnagiris who are local to DC, they’re sometimes restricted to their District). They did not ask him to surrender his passport. Now, perhaps something is also going on with him in the military. But the whole thing — on top of the inevitable shock of having an active duty officer arrested — raises more questions than other cases.

All of which is to say that, with a defendant who genuinely poses unique security risks, the government is now taking their time to flesh out their investigation.

I’ve said from the start that this investigation has been lightning quick. That’s still, absolutely, true. But there’s going to be a lot more happening behind closed doors in the weeks ahead.