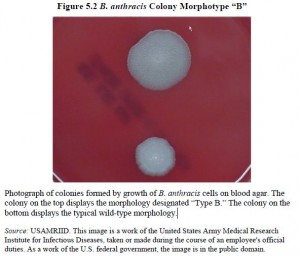 As a ProPublica article piles onto the material above from McClatchy, the lead prosecutor in the case continues to claim that the one sample lacking variants is a strong indicator of Ivins’ guilt and shows that he tried to hide the RMR-1029 flask from further scrutiny: END_OF_DOCUMENT_TOKEN_TO_BE_REPLACED 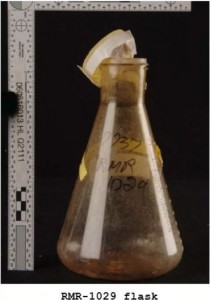 Ivins' RMR-1029 flask, identified genetically as the likely source from which the attack material was cultured.

Back in May, McClatchy provided new information that added signficant doubt to the FBI’s accusation that Bruce Ivins worked alone in the 2001 anthrax attacks.  The key information McClatchy reported was that in addition to the already known abnormally high silicon content in the spores found in the attack material, high concentrations of tin were often found in association with the silicon.  They then went on to provide convincing evidence that this unique chemical fingerprint could have come about from a process in which a tin-catalyzed polymerization of silicon-containing precursor molecules was employed to confer on the spores their unique properties which allowed them suspend very easily in air.  The key point in this observation is that this highly sophisticated chemical treatment of the spores requires both expertise and equipment that Ivins did not have, making it impossible for him to have carried out the attacks alone if the spores were indeed treated with this process.

This morning, William Broad and Scott Shane continue this thread of argument in a New York Times article. Broad and Shane report that the scientists who first raised the tin-silicon combination issue now have a scientific article coming out in the Journal of Bioterrorism & Biodefense:

F.B.I. documents reviewed by The New York Times show that bureau scientists focused on tin early in their eight-year investigation, calling it an “element of interest” and a potentially critical clue to the criminal case. They later dropped their lengthy inquiry, never mentioned tin publicly and never offered any detailed account of how they thought the powder had been made.

The new paper raises the prospect — for the first time in a serious scientific forum — that the Army biodefense expert identified by the F.B.I. as the perpetrator, Bruce E. Ivins, had help in obtaining his germ weapons or conceivably was innocent of the crime.

Here is how I described the science behind the current question when the McClatchy article was published:

The FBI carried out a special form electron microscopy that could identify the location of the silicon in the spores from the attack material. They found that the silicon was in a structure called the the spore coat, which is inside the most outer covering of the spore called the exosporium. If silica nanoparticles had been used to disperse the spores, these would have been found on the outside of the exosporuim (see this diary for a discussion of this point and quotes from the scientific literature) because they are too large to penetrate it.  No silicon signature was seen on the outside edge of the exosporium.  What is significant about the type of silicon treatment suggested in the McClatchy piece is that both high silicon and high tin measurements were found in several samples and that there is an alternative silicon treatment that would involve a tin-catalyzed polymerization of silicon-containing precursor molecules. McClatchy interviewed scientists who work with this process and they confirmed that the ratio of silicon to tin found by the FBI is in the range one would expect if such a polymerization process had been used.

What McClatchy doesn’t mention in their report is that it would seem for a polymerization process of this sort, the silicon-containing precursor molecules would be small enough to penetrate the exosporium before being polymerized, or linked together into much larger molecules, once they reached the spore coat. This would mimic the location of silicon incorporated “naturally” into spores.

In today’s article, Broad and Shane report that both Alice Gast, who chaired the National Academy of Science panel that reviewed the FBI’s scientific work and Nancy Kingsbury, the head of an ongoing Government Accountability Office analysis, agree that the silicon-tin issue is worthy of further investigation.

In my ongoing analysis of the known scientific facts surrounding the anthrax attacks, I have been insistent that further attention needs to be paid to secret government laboratories as the potential real source of the attack material.  Broad and Shane appear to be headed in that same direction:

If Dr. Ivins did not make the powder, one conceivable source might be classified government research on anthrax, carried out for years by the military and the Central Intelligence Agency. Dr. Ivins had ties to several researchers who did such secret work.

Note that since Ivins “had ties” to several researchers within these classified facilities, that opens a direct route by which such a facility could have received a sample from Ivins’ RMR-1029 flask which has been identified genetically as the likely precursor from which the attack material was cultured.

We also learn this morning that on Tuesday evening, the PBS series Frontline will air an episode produced in cooperation with McClatchy and ProPublica.  This report will center on the tremendous pressure the FBI applied to Ivins and how such pressure “can shred an individual’s life”:

According to this hard-edged report done in partnership with McClatchy Newspapers and Propublica, the FBI did more than zero in. Under tremendous pressure to solve the case that started in 2001 with anthrax mailed to U.S. senators and network anchors, the agency squeezed Ivins hard — using every trick in the book to get a confession out of him even as he insisted on his innocence to the end.

Ivins was a troubled guy with some distinctive kinks, the report acknowledges, but even FBI consultants in the case now admit that the agency overstated its evidence and never found a smoking gun to prove the researcher’s guilt. In fact, evidence was revealed last summer that shows Ivins did not have the equipment needed to make the powdery kind of anthrax sent through the mail. That didn’t stop the FBI then — or now — in acting like it found its man.

Even as both scientists and journalists poke gaping holes in their now-closed investigation, the FBI continues to stand firm in its position that Ivins acted alone in the anthrax attacks, and their spokesman reiterated this position to Broad and Shane.  Given the apparent momentum of the scientists and journalists, though, the FBI’s position begins to look more and more like something Saddam Hussein’s infamous “Baghdad Bob” would spout.

Last we heard from the FBI’s not-so-smoking gun in the anthrax case, USAMRIID admitted that they had no idea what kind of flasks of anthrax and other microbes its scientists had hidden around their labs, basically shredding the FBI’s claim that the anthrax used in the attacks on Congress and the Press could only have come from Bruce Ivins’ flask.

Now, we learn that the supposedly exact match between Ivins’ anthrax and that used in the attacks was not so close. (h/t fatster)

At a biodefence meeting on 24 February, Joseph Michael, a materials scientist at Sandia National Laboratories in Albuquerque, New Mexico, presented analyses of three letters sent to the New York Post and to the offices of Senators Tom Daschle and Patrick Leahy. Spores from two of those show a distinct chemical signature that includes silicon, oxygen, iron, and tin; the third letter had silicon, oxygen, iron and possibly also tin, says Michael. Bacteria from Ivins’ RMR-1029 flask did not contain any of those four elements.

Two cultures of the same anthrax strain grown using similar processes — one from Ivins’ lab, the other from a US Army facility in Utah — showed the silicon-oxygen signature but did not contain tin or iron. Michael presented the analyses at the American Society for Microbiology’s Biodefense and Emerging Diseases Research Meeting in Baltimore, Maryland.

The chemical mismatch doesn’t necessarily mean that deadly spores used in the attacks did not originate from Ivins’ RMR-1029 flask, says Jason Bannan, a microbiologist and forensic examiner at the FBI’s Chemical Biological Sciences Unit in Quantico, Virginia. The RMR-1029 culture was created in 1997, and the mailed spores could have been taken out of that flask and grown under different conditions, resulting in varying chemical contents. "It doesn’t surprise me that it would be different," he says.

The data suggest that spores for the three letters were grown using the same process, says Michael. It is not clear how tin and iron made their way into the culture, he says. Bannan suggests that the growth medium may have contained iron and tin may have come from a water source.

There are a couple of reasons why this damages the FBI operative story implicating Ivins.

First, their chronology completely depends on Ivins’ late night work in his own lab at Ft. Detrick and assumes he was working from the "smoking gun" flask directly. Yet if the anthrax shows traces of END_OF_DOCUMENT_TOKEN_TO_BE_REPLACED