The National Research Council and Institute of Medicine yesterday released the results of a study addressing mortality in the United States as compared to other developed nations. The full report can be purchased here, where a summary also can be downloaded as a free pdf file. The press release on the study frames the questions addressed:

On average, Americans die sooner and experience higher rates of disease and injury than people in other high-income countries, says a new report from the National Research Council and Institute of Medicine.  The report finds that this health disadvantage exists at all ages from birth to age 75 and that even advantaged Americans — those who have health insurance, college educations, higher incomes, and healthy behaviors — appear to be sicker than their peers in other rich nations.

“We were struck by the gravity of these findings,” said Steven H. Woolf, professor of family medicine at Virginia Commonwealth University in Richmond and chair of the panel that wrote the report.  “Americans are dying and suffering at rates that we know are unnecessary because people in other high-income countries are living longer lives and enjoying better health.  What concerns our panel is why, for decades, we have been slipping behind.”

From the summary, we have this long explanation of the causes of high US mortality, where I have added emphasis:

• Health systems. Unlike its peer countries, the United States has a relatively large uninsured population and more limited access to primary care. Americans are more likely to find their health care inaccessible or unaffordable and to report lapses in the quality and safety of care outside of hospitals.

• Health behaviors. Although Americans are currently less likely to smoke and may drink alcohol less heavily than people in peer countries, they consume the most calories per person, have higher rates of drug abuse, are less likely to use seat belts, are involved in more traffic accidents that involve alcohol, and are more likely to use firearms in acts of violence.

• Social and economic conditions. Although the income of Americans is higher on average than in other countries, the United States also has higher levels of poverty (especially child poverty) and income inequality and lower rates of social mobility. Other countries are outpacing the United States in the education of young people, which also affects health. And Americans benefit less from safety net programs that can buffer the negative health effects of poverty and other social disadvantages.

• Physical environments. U.S. communities and the built environment are more likely than those in peer countries to be designed around automobiles, and this may discourage physical activity and contribute to obesity.

No single factor can fully explain the U.S. health disadvantage. Deficiencies in the health care system may worsen illnesses and increase deaths from certain diseases, but they cannot explain the nation’s higher rates of traffic accidents or violence. Similarly, although individual behaviors are clearly important, they do not explain why Americans who do not smoke or are not overweight also appear to have higher rates of disease than similar groups in peer countries.

More likely, the U.S. health disadvantage has multiple causes and involves some combination of inadequate health care, unhealthy behaviors, adverse economic and social conditions, and environmental factors, as well as public policies and social values that shape those conditions.

What stands out to me is that the list of reasons Americans die early overlaps significantly with the social goals of right-wing libertarians who worship Ayn Rand and John Galt. Consider the “let them die” attitude displayed at town hall meetings during the time the ACA was being developed. Randians were squarely in favor of maintaining the status quo where many are unable to afford health insurance coverage, choosing to characterize those in poverty as lazy moochers.

Consider also the response on the right when Michelle Obama led the push for healthier school lunches, where the conclusion was “It’s not reasonable to expect them to either eat what the government deems healthy or go hungry.” Of course students should be free to choose unhealthy foods with too many empty calories, according to the Randians, who then would deny health coverage for those who become obese and otherwise unhealthy as a result.

And then we get to the social and economic conditions, where the study dares to point out that the US now has conditions with extremely high poverty and low social mobility. We can’t be imposing any limits on “producers” by helping “moochers” with those pesky social safety net programs. Never mind that the absence of those programs now stands as a recognized factor in increased mortality and in increased social costs for treating poor people once they become sick. This attitude of disrespecting the safety net is now so widespread in US society after an unrelenting assault from Randians that none other than that well-known socialist Barack Obama has been openly suggesting he is willing to make a deal on reducing Social Security benefits.

Of course our car-centric society also contributes to obesity and poor health and the design of our communities around cars suggests that we are unlikely to change behavior on that front any time in the near future.

But the bit I skipped over in the paragraph on health behaviors is one of the factors where the US seems to stand out from other developed countries the most. Consider this chart: 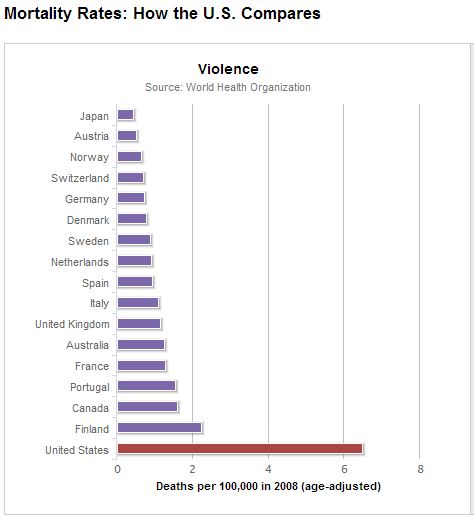 The ease of availability of guns puts the US far ahead of other developed countries when it comes to intentional violent death that is not self-inflicted. These gun deaths were the lede in today’s AP article on the study:

The United States suffers far more violent deaths than any other wealthy nation, due in part to the widespread possession of firearms and the practice of storing them at home in a place that is often unlocked, according to a report released Wednesday by two of the nation’s leading health research institutions.

And, of course, we can’t limit access to guns because, you know, freedom. Yesterday’s New York Times has more on the gun aspects of the study:

Sixty-nine percent of all American homicide deaths in 2007 involved firearms, compared with an average of 26 percent in other countries, the study said.

The study’s leader suggested to the Times that the results are not the fault of a particular political party or administration:

“Something fundamental is going wrong,” said Dr. Steven Woolf, chairman of the Department of Family Medicine at Virginia Commonwealth University, who led the panel. “This is not the product of a particular administration or political party. Something at the core is causing the U.S. to slip behind these other high-income countries. And it’s getting worse.”

No, a particular administration or political party is not at fault. It is John Galt’s fault. He is killing young adults in our country and he is enrolling the entire public policy apparatus in a widespread hatred of government, social safety nets and regulations that promote public health. I suspect that is why the summary passage I quoted above ends with a reference to “public policies and social values that shape those conditions”. They didn’t come out and name him in the parts of the report I read, but I suspect the study’s researchers encountered John Galt at nearly every point of their study, and he was busily killing Americans.