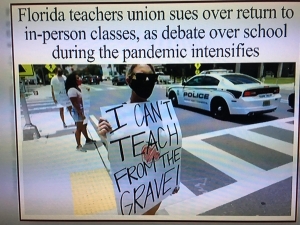 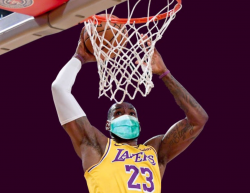 I really don’t have a lot for this week, but there is this: The National Basketball Association is desperate to join the Grand Reopening. And boy is it a doozy. Via ESPN:

“the NBA’s board of governors overwhelmingly approved a proposal for 22 teams to return to play, starting July 31 at the ESPN Wide World of Sports Complex at Walt Disney World Resort in Orlando, Florida.
…
Before the NBA can come back, teams must reassemble in their home markets. That means bringing back players who left for their hometowns — or, in some cases, home countries — while the league sorted out its plans. Players who return from overseas are likely to be subject to a two-week quarantine upon arrival, under current federal rules.
Teams will continue to hold individual workouts in their facilities. A training camp will start June 30 and last a week. All teams will fly to Orlando on July 7, three weeks before the restart of the season. They will likely have to quarantine for some period; Florida law requires people flying in from some states, including New York, to quarantine for 14 days.”

Orlando you say? Yep, they are all going to DisneyWorld to live and play in a “bubble”! The 22 teams include six, including the Phoenix Suns, that were not in playoff contention when the season was stopped. Why, you ask? Well it is literally as simple as more teams equals more games to broadcast, and therefore more money to make for the plantation owners of the NBA. A group that is all white with the exception of Charlotte’s Michael Jordan, Sacramento Kings owner Vivek Ranadivé, who is Indian and Joseph Tsai of the Brooklyn Nets. The players they are summonsing to live and play in the bubble are, of course, about 75% black.

But there are some problems, of course. One is the players:

“In a string of tweets on Wednesday, ESPN’s Adrian Wojnarowski outlined conversations that were taking place over the last couple of days including a large group of “several dozen” players who believe resuming play in Orlando is a bad idea.

According to Wojnarowski, because of the dissenting views, the NBA and NBPA are likely to agree on a provision in which players would not be required to join their respective teams for the restart of the season. The two sides are working toward an agreement that would not include disciplinary action for players who choose to stay home, though they would lose a portion of their salary for games missed.”

Yeah, while players want to play theoretically, who wants to live in a bubble far away from home, with limited, if any fun, friends and nightlife so the league can rake in some bucks off of TV revenue? And probably little to no family contact. There will, of course, be no fans and players and coaches will be Carona tested every day. Older coaches may not be allowed, which would be horrid, and, frankly, probably a violation of age discrimination protections.

There are a LOT more issues too, starting with how Covid secure will “the bubble” actually be? It might work. It might t not. There are a lot of moving parts on that. As to those parts and all the other problems, this article by Zach Lowe at ESPN is really good, and I urge you to take a read of it.

It will be really interesting to see how this plays out. Were I an NBA player, I think I’d take a pass on this harebrained scheme and say see you next year guys.

Well, that’s it. The Zach Lowe piece really is a worth a read to get the full picture. Today’s music is, of course, Roundball Rock, one of the best sports theme songs ever. Yeah, I know, it is John Tesh, but with a full big band, and it is pretty good. Hoop it up folks!