[As always, check the byline — this is by me, Rayne, and I am not the lawyer on this crew.]

Call your senators RIGHT NOW and insist they do whatever they can to halt Brett Kavanaugh’s nomination to the Supreme Court. He should not be confirmed.

Leave a voicemail, don’t put it off; there’s less than 24 hours before the hearing begins. Do you need a script to help make your call? Check with @Celeste_pewter at this link; she has you covered. Send a fax if you’d rather. Look up your senators’ contact details at GovTrack.us. But do it, RIGHT NOW. Come back to this when you’re done.

Now that’s the important part of this post, the must-do call to action right up front. Drop everything and make the call before proceeding. Persuade friends and family to do the same right now.

The rest of this post is a formality over which I have fretted for more than a week. There are myriad articles out there, new ones published every day, explaining Kavanaugh’s judicial history and why he is unacceptable as a justice with a life-time appointment.

The most important reason, though, is evident in the actions of the White House and the GOP combined.

They have acted and continue to act in bad faith about everything while in office. Kavanaugn’s nomination and their handling of the vetting process is but one more cluster of bad faith acts.

If this administration had nominated Kavanaugh in good faith, his works would have been openly available to the Senate Judiciary Democrats with few exceptions — but this is not the case.

If Kavanaugh himself was a good faith nominee, he would be pushing for his work to be open for evaluation — but he is silent.

If the GOP Congress was acting in good faith, they, too, would demand all Kavanaugh’s documents — but they aren’t. Senator Susan Collins in particular deserves a drubbing here, having signaled an intent to approve Kavanaugh based on the documents she’s seen so far and they are a piddling amount of the documents Kavanaugh created or was involved with during his career. She is willfully buying a pig in a poke in spite of her position on women’s reproductive health.

The hurry to seat Kavanaugh is also unnecessary; Mitch McConnell wants him to begin on October 1 with the SCOTUS’ next session. To meet this wholly arbitrary deadline McConnell has broken with past practice — and shorted the production of documents related to Kavanaugh’s work history.

It’s not just the Trump administration, either, since many of the withheld documents were generated during the Bush administration. An unprecedented and partisan review process by George W. Bush administration lawyers is running in tandem with the National Archives and Records Administration’s document production, which the NARA calls “something that has never happened before.” NARA can’t produce the Kavanaugh documents before the end of October; the Bush lawyers are cherry-picking their selection to meet the 9:30 a.m. Tuesday hearing.

Given what we know of the Bush administration’s efforts on torture and surveillance alone, Senate Democrats are right to be worried about the insufficiency of documents. Pat Leahy indicated what few documents they’ve received include many duplicates, further frustrating analysis. 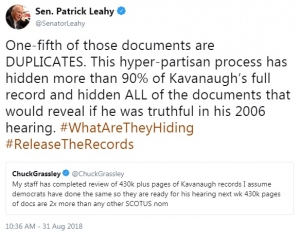 Why are the administration and the GOP trying so hard to prevent access to documentation of Kavanaugh’s work history? Why the sudden reversal on transparency after a Republicans-only meeting on July 24th? What of the concerns Leahy expressed in an August 17th letter to White House Counsel Don McGahn?

…do you have reason to believe any of the records relate to:
1. The legal justifications or policies relating to the treatment of detainees?
2. The rules governing the detention of combatants?
3. The warrantless wiretapping of Americans?
4. A proposed constitutional amendment to define marriage as a union between one man and one woman?

These topics are far too weighty to be given deliberate short shrift — the specificity of exclusion is troubling, especially when combined with questions about Kavanaugh’s questionable finances and the likelihood Kavanaugh lied under oath before the Senate in 2006. It gives the appearance of a cover-up, which is more than bad faith; it’s malignancy.

Before Justice Kennedy retired we had already quite enough of GOP bad faith. Obama’s SCOTUS nominee Merrick Garland should have had a hearing; his work product had not been suppressed. Obama’s previous nominees had likewise been fully vetted, their documents made available. But Mitch McConnell suppressed Obama’s last appointment in bad faith; there is nothing at all in the Constitution to support the Senate’s denial of Obama’s appointment by refusing to evaluate his nominee.

Refusing to hold a hearing meant a rejection of the Senate’s role to advise and consent. By the simplest interpretation of the Constitution, McConnell violated his oath of office by failing to support and defend the Constitution of the United States and to well and faithfully discharge the duties of his office.

Unfortunately there is no remedy save for impeachment of McConnell or removal by voters and neither will happen before Tuesday.

The next critical reason why Kavanaugh should neither receive a Senate Judiciary Committee hearing nor be confirmed is Trump’s current status as an unindicted co-conspirator.  Although the current conspiracy for which Trump has not yet been indicted is not now in Special Counsel’s folio, we cannot know until after Special Counsel’s Office has completed their work whether Kavanaugh’s appointment was part of a larger conspiracy to defraud the U.S. The Senate should exercise its role to advise and consent by refraining from evaluation of Kavanaugh until Trump’s status is resolved — and the Senate Judiciary Dems should uniformly reject a hearing and confirmation.

What is already known about Kavanaugh suggests he will not act neutrally should the prosecution of any case involving Trump as a co-conspirator come before the SCOTUS. In 2009 Kavanaugh wrote for the Minnesota Law Review on deferrals of civil suits, criminal investigations and prosecutions of the president,

… The indictment and trial of a sitting President, moreover, would cripple the federal government, rendering it unable to function with credibility in either the international or domestic arenas. Such an outcome would ill serve the public interest, especially in times of financial or national security crisis.

In the same article, Kavanaugh encouraged Congress to write legislation “exempting a President—while in office—from criminal prosecution and investigation, including from questioning by criminal prosecutors or defense counsel.”

This opinion is flawed and based on what he saw of Clinton, Bush, and Obama presidencies. We no longer have a president who is absorbed by the duties of the office, taking roughly 25% of his time in office to commit violations of the Emoluments Clause by playing golf at his own resorts. The Special Counsel’s Office investigation hasn’t disrupted his golf game; it hasn’t disrupted the remaining 75% of his time in office save for Trump’s entirely elective and unnecessary kvetching via Twitter about a witch hunt.

No feedback from senators so far indicates Kavanaugh would recuse himself on cases coming before SCOTUS related to civil suits or criminal charges against Trump.

These issues are all of a piece since they are interrelated by a narrow number of cases and will likely come down to swing senators who claim to care most about these issues — senators Collins and Lisa Murkowski. Kavanaugh has been interviewed by Collins who says she believes he is in agreement with her that Roe v. Wade is settled law and not likely to change. Collins, however, has been screwed over repeatedly by her party in no small part because she trusts uterus-deficient counterparts to see women’s reproductive rights as she does (this is an awful wordy way to say she’s easily played).

Lindsey Graham, however, left off sucking up to Trump to suggest Roe could be overturned by Kavanaugh because “a precedent is important but it’s not inviolate.” Having said this on at least two different Sunday talk shows one might wonder if he is leading Kavanaugh or Collins and Murkowski.

No Senate Democrat should give Graham or Kavanaugh the benefit of the doubt, though. His dissent in Garza v. Hargan, the D.C. Circuit case in which a 17-year-old asylum seeker sought an abortion while in U.S. custody, is disturbing. He wrote,

The Government has permissible interests in favoring fetal life, protecting the best interests of a minor, and refraining from facilitating abortion. …

No. The government has no interests in favoring fetal life as if fetuses had rights co-equal to the mother, teen or adult, whether free or in detention. Forcing a minor to carry another child to term is not in the government’s interests; it’s child abuse.

Kavanaugh’s opinion in Priests for Life v. HHS, wrestling with the issue of religious freedom versus access to contraception, is also disturbing. He concluded,

Second, that said, Hobby Lobby strongly suggests that the Government has a compelling interest in facilitating access to contraception for the employees of these religious organizations.

Third, this case therefore comes down to the least restrictive means question.

Nowhere in this conclusion does it ever occur to Kavanaugh there are other reasons women are prescribed birth control besides contraception which have nothing to do with employers’ religious beliefs. To be fair, most men are clueless about the benefits of birth control for minimizing cramps and managing other debilitating menstrual problems. But this conclusion combined with the dissent in Garza do not assure that Kavanaugh will see Roe as settled.

Not good. Kavanaugh dissented in Heller v. District of Columbia, a case which upheld Washington D.C.’s ban on semi-automatic weapons, writing that the Supreme Court

“held that handguns — the vast majority of which today are semiautomatic — are constitutionally protected because they have not traditionally been banned and are in common use by law-abiding citizens.”

This blows off the 1994 Federal Assault Weapon Ban which expired in 2004 and should have been renewed since civilian deaths by assault weapons escalated after 2004.

Kavanaugh couldn’t be trusted to support a ban on assault weapons which are semi-automatic.

This issue infuriates me as much as Kavanaugh’s dissent on Garza. Last year in U.S. Telecom Association v. FCC he wrote,

… While the net neutrality rule applies to those ISPs that hold themselves out as neutral, indiscriminate conduits to internet content, the converse is also true: the rule does not apply to an ISP holding itself out as providing something other than a neutral, indiscriminate pathway—i.e., an ISP making sufficiently clear to potential customers that it provides a filtered service involving the ISP’s exercise of “editorial intervention.” …

Except ISPs are nearly inseparable from telecom — which we would not allow any editorial rights over content — and ISPs are too thin in some markets, forcing customers to accept what might be the only ISP in their area along with that ISP’s “editorial intervention.”

I’m also disturbed by the examples he used of throttled content like Netflix and Ticketmaster while ignoring the possibility an ISP could exercise “editorial intervention” over essential services like email and VoIP.

Nothing like having Verizon sitting on the Supreme Court.

There’s no chance at all to his thinking that metadata itself could be the message.

That’s more than enough without having to really dig, and I haven’t even touched on Kavanaugh with regard to LGBT equality. White House and GOP bad faith is enough reason to insist Kavanaugh not be confirmed.

If you made it this far without having called your senators, do it RIGHT NOW and insist they do whatever they can to halt Brett Kavanaugh’s confirmation to the Supreme Court. He should not serve a lifetime as a justice given what we already know.