What’s the difference between these two pipelines? Only variations are the origin of the oil they may transport and their location as far as I can tell since they are described as competing pipelines.

Oh, and the Keystone XL pipeline was vetoed by President Obama a year ago this past February because Congress tried to ram through approval, attempting to “circumvent longstanding and proven processes for determining whether or not building and operating a cross-border pipeline serves the national interest,” according to the president.

In both cases — Keystone XL and the Dakota Access — the planned pipelines traversed Native American tribal lands and/or water systems upon which these sovereign nations relied. The affected tribes have protested the credible threats these pipelines pose to their health and safety as well as their heritage and sovereignty.

The threat is real; there have been 11 pipeline accidents since 2000 on lines carrying oil or gasoline across the Dakotas. One of those pipeline accidents resulted in roughly 20,000 barrels or 865,000 gallons of oil spilling beneath a farm in North Dakota in 2013. There was a ten-day lag after the farmer brought the spill to the company’s attention until the state’s governor heard about the accident — ridiculous, considering North Dakota is the 47th largest state in terms of population, at less than 800,000 residents. It’s not like there were a lot of people in the way. The spill covered an area equal to seven football fields and clean-up is still under way and may not be completed until some time in 2017. The North Dakota Tesoro pipeline oil spill is one of the largest in the U.S. to date.

Oil producers and pipeline owners/operators have frankly been lousy in their responsibilities to the public. It’s not just the 11 pipeline accidents in the Dakotas since 2000; it’s a rather lengthy list of them across the entire country and a lengthy track record of crappy response to the damage done to the environment. My state, Michigan, which is surrounded by the largest bodies of fresh water in the world, is also the site of the largest oil pipeline spill in the U.S. In 2010, more than 1.1 million gallons of oil spilled, much of it into a waterway. Alarms notifying the pipeline’s owner, Enbridge, of the spill were initially ignored for 17 hours, blown off as operation notifications.

The Native American tribes have no reason whatsoever to believe oil producers and pipeline owners/operators will act with any more care than they have to date. Further, they have no reason to trust the U.S. government about these pipelines, either. They have been betrayed and damaged again and again by the U.S. — excessive and mortal police brutality, theft of human remains, theft and mismanagement of billions in assets, the indignity of fighting to remove the name of a mass murderer from public lands, the catastrophic contamination of the San Juan River supplying water to the Navajo nation — the insults are endless.

The latest insult: North Dakota’s Governor Jack Dalrymple signed an executive order to obtain more funding for additional police to deter approximately 1,500 protesters. The state has pulled water supplies used by the protesters and refused to allow portable toilets to be emptied. This follows a temporary restraining order granted to Dakota Access LLC by a federal district court against protesters’ interference with pipeline work. Native Americans have also been prevented from leaving reservation land, which may be a violation of civil rights and treaties.

Native Americans have legitimate concerns with the Dakota Access pipeline. For one, its planned route crosses the Missouri River which serves as the entire water source for the Standing Rock Sioux Tribe; the Army Corp of Engineers (ACOE) approved 200 water crossings by the pipeline in spite of requests by the Sioux to deny construction permits. The ACOE, however, reviewed and rejected an alternate pipeline route crossing the Missouri River near Bismarck as it was deemed a threat to the municipal water supply. This looks like outright racism on the face of it; the pipeline is a threat to 92% white Bismarck, but not a sovereign Native American tribe?

Secondly, the ACOE has been asked by U.S. Environmental Protection Agency (EPA), the U.S. Department of Interior (DOI) and the Advisory Council on Historic Preservation to conduct an investigation and prepare a formal Environmental Impact Statement (EIS), requiring consultation with the affected tribes. No EIS appears to have been conducted to date. In addition to the health and environmental safety concerns related to the pipeline’s installation and operation, the historical significance of the area is inadequately documented. The lack of a thorough assessment means the current Dakota Access pipeline plan may disrupt an older Mandan village site where Mandan may be buried. The site has cultural and religious significance to tribes and should be protected by the Advisory Council on Historic Preservation under federal law.

Dakota Access LLC is pressing for this pipeline to reduce the costs of oil. Shipping crude oil from North Dakota’s Bakken Shale reserve by rail or truck is more expensive than shipping by pipeline.

That is until ALL the true costs and externalities are added, like the spills, remediation, short- and long-term health and environmental problems are added. These costs haven’t been added to the true cost of oil and are instead a gamble which humans living nearest to the pipeline must pay if there is a failure. 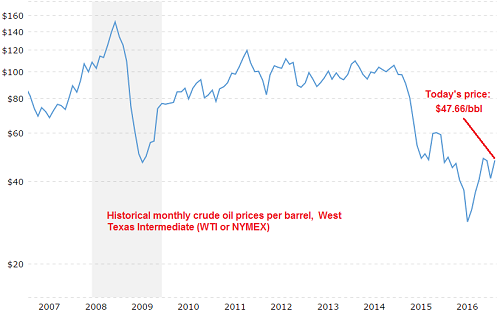 [10-year monthly price of WTI per barrel via Megatrends]

While the oil producers and pipeline operators continue to hammer away at the cost of oil, the price of oil has fallen. They can’t drop the cost fast enough and deep enough to realize a return on investment. They will cut corners as much as possible as the price of oil falls — and it will, if demand for oil also falls as it has with the rise of hybrid and electric vehicles. Cutting corners means there will be greater risk the pipeline will not be adequately monitored or maintained, just as it wasn’t in Michigan.

As more and more alternative, green energy resources come on line along with the technology to use them, it will make even less sense to invest in pipelines which may not carry all that much oil. The Bakken Shale reserve is estimated at several hundred billion barrels of oil, but the amount which can be recovered readily and economically is much less than 10% of the estimated total reserve. If the oil is too expensive to extract AND competing energy resources are both cheaper and available, why build this pipeline at all? How is enabling our continuing addiction to oil in the long-term best interests of our country?

It will take some spine to do the right thing and force this project to slow down for a full EIS assessment. It will take even more spine to point out we are both at the end of fossil fuel and at the limit of our disregard for Native Americans’ lives. It can be done, however; just ask Canada’s Justin Trudeau how he did it.