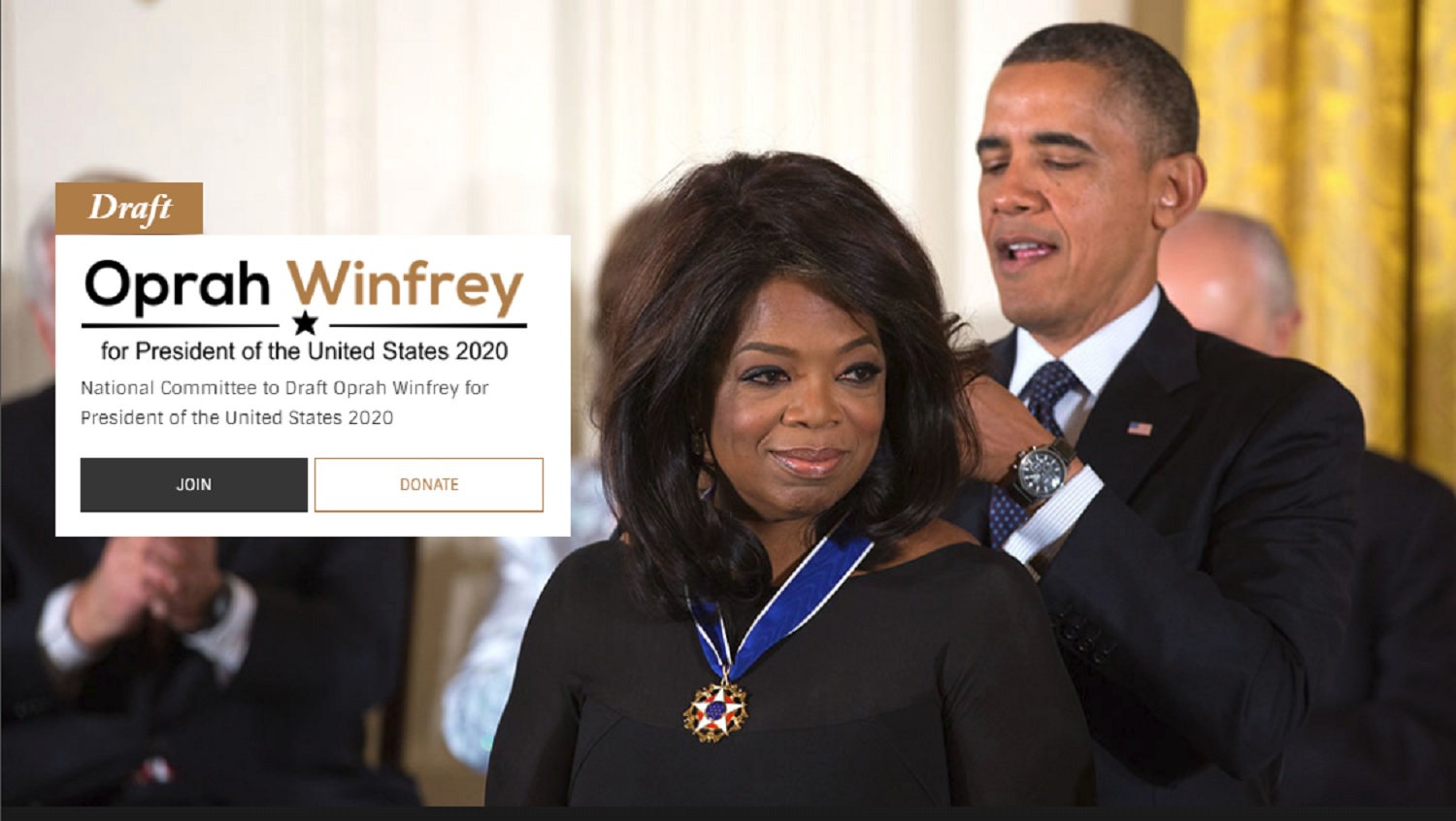 A majority of Americans are really frustrated right now but they shouldn’t let their guard down at the first sign of hope. Tapping someone’s anger is an easy way for scammers and other hostile agents to get access to personal information and in some cases, money.

One likely example of opportunism is the National Committee to Draft Oprah Winfrey for President of the United States 2020. There have been emails sent to folks soliciting their support to recruit Oprah Winfrey to run for president in 2020 — except the entity sending the emails looks like vaporware.

There’s a simple yet attractive website with a countdown clock to Election Day 2020 and a sign up form as well as a donate button, along with a means to share the website across social media.

A press release announcing this effort is published as a separate page at the website, too.

Except that the press release — unlike authentic press releases — gives zero information about the organization except for an email address.

The website itself has no About Us, no Directors or Founders or Managers or Team page. There’s no information about a nonprofit or other political entity behind this, only an organization name, a claim to copyright, and the two pages — Home and Press Release.

And absolutely no Privacy Policy or Terms of Use provided, nor is the page set up for Hyper Text Transfer Protocol Secure (HTTPS) protocol (for this reason I am not providing a link to the site).

The website’s domain registration is masked, only showing DomainsByProxy as the registrar. Do a WhoIs lookup on the Democratic Party’s domain for comparison; you’ll find the domain isn’t masked at all and both a physical address as well as contact information are readily available.

The worst part of this is the repeated use of a quote by Winfrey’s long-time partner, Stedman Graham, as a justification for this ‘movement’. Yet nowhere on the site does Graham appear as a founder, director, manager, team member, or even an endorser.

The website itself should be treated with suspicion; without more evidence of a legitimate organization behind it, it’s merely a pretty address harvesting tool and an opportunity for a scam artist to pick up some easy liberal cash.

How easily could an outfit like Cambridge Analytica match up these harvested addresses against Facebook and voters’ records, to identify which voters to suppress with Oprah-flavored micro-targeted messaging via social media? It’d be worth a pretty penny to an opponent (and their sponsors) facing stiff headwinds in 2020.

If there is a real movement which is serious about recruiting Oprah, for goodness sake show up at local Democratic Party meetings and learn how to do this correctly. Don’t let Oprah get turned unknowingly and without her consent into another Russian tool to fragment the party by drafting her from outside the party.

P.S. Hey Tom Perez and Keith Ellison — perhaps a little tighter control on domains.democrat addresses is worth your time, to prevent Democratic Party supporters? Didn’t the DNC learn anything from the past two years about cybersecurity?

[Image on home page via National Committee to Draft Oprah Winfrey for President of the United States 2020, published here under Fair Use.]