Clinton, Petraeus Head to Pakistan for Talks While NATO Attacks Near Border 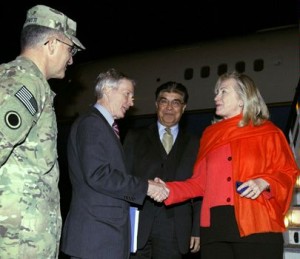 Secretary of State Hillary Clinton and CIA Director David Petraeus will be in Islamabad today for talks amid somewhat calmer US-Pakistan relations and to set the stage for a possible negotiated end to hostilities in Afghanistan.  At the same time, NATO has been conducting raids for about a week on the Afghanistan side of the border with Pakistan, attempting to rid the area of members of the Haqqani network.

The previously escalated rhetorical battle between the US and Pakistan has been on a calming trajectory since reaching its highpoint when Joint Chiefs Chair Mullen claimed that the Haqqani network was a virtual arm of Pakistan’s ISI.  Amid these calming relations, Clinton arrives in Islamabad today after a visit to Kabul.

The visit to Afghanistan was aimed in part at boosting Afghanistan’s efforts to negotiate a settlement with the Taliban ahead of the US withdrawal from Afghanistan.  Those negotiations were dealt a severe setback when Burhanuddin Rabbani, the chief negotiator for Afghanistan, was killed last month by a suicide bomber.  As the Washington Post points out, the US and Afghanistan have not always agreed on how to proceed in the negotiations:

Clinton, who traveled to Kabul after visits to Libya and Oman, was scheduled to meet Thursday with President Hamid Karzai and other government and parliamentary leaders. Her trip comes at a time of increased tensions between U.S. and Afghan officials over how to pursue peace with the radical Islamist Taliban movement after a decade-long insurgency.

U.S. officials are pushing for a negotiated settlement with the Taliban as a crucial step toward ending the conflict and have engaged in secret parallel talks with Taliban leaders, so far without success.

Karzai, who has criticized the secret U.S. talks, has urged a greater role for Pakistan in the reconciliation process, noting that many of the key Taliban commanders use Pakistan’s lawless tribal region as a base. The State Department official, who spoke on the condition of anonymity to discuss sensitive diplomatic matters, said Clinton “agrees with President Karzai that Pakistani cooperation is critical.”

Note that while differing on their approaches to negotiating with the Taliban, both Afghanistan and the US agree that Pakistan must do more to control militants, especially the Haqqani network.  However, the accusations of providing safe havens for the Haqqanis now seem to flow both directions:

High in the mountains, a nation’s troops are regularly attacked by insurgents who easily come and go from sanctuaries across a porous international border. Armed forces in the neighboring country, nominally an ally, do little to stop the rebels. Resentment in the capital is growing.

For several years, that is how frustrated U.S. official have described the challenge for the NATO coalition in Afghanistan, which, they say, is battling Taliban enemies who operate freely from hilly hideouts in next-door Pakistan, an American ally and aid recipient.

But in the past several months, Pakistan has turned the tables, adopting a mirror-image argument in its own defense.

According to this increasingly assertive account, Pakistani Taliban fighters flushed out by Pakistani military offensives have now settled into a security vacuum created by NATO forces in eastern Afghanistan whose attention is focused elsewhere. That territory, Pakistan contends, is the new regional hub for Islamist militants of all stripes, one that the U.S.-led coalition must better control to prevent attacks on American forces as well as strikes inside Pakistan.

It undoubtedly is no coincidence that NATO is in the midst of a campaign against these militants near the Pakistan border at the same time that Clinton and Petraeus will visit Pakistan.  In fact, the massing of NATO troops in the region is so large that many Pakistani newspapers have blared headlines warning of a massive ground invasion into Pakistan.  NATO is claiming that this campaign has killed 115 insurgents since its start on October 15.

This NATO action sets the stage for Clinton’s remarks in Kabul as she prepared to head to Islamabad today.  As reported by AFP and carried by Dawn:

“We are taking action against the Haqqanis. There was a major military operation inside Afghanistan in recent days,” she told a joint news conference with Afghan President Hamid Karzai.

Clinton is later Thursday due in Pakistan, where she is to be joined by CIA chief David Petraeus and top US military officer Martin Dempsey.

“We intend to push the Pakistanis very hard as to what they are willing and able to do with us…to remove the safe havens and the continuing threats across the border to Afghans,” said Clinton.

And what good is a “new” effort at talks without a new catchphrase to go with it?  Reuters reports [this quote is from the 5:51 am version of the story which was changed at 7:42 am to no longer have the first two quoted paragraphs] that the new phrase is “fight, talk, build”:

Clinton will fly on to Islamabad, a U.S. official said, where she will also urge officials to work more closely with counterparts across the border. She presented a new summary of the mission in both countries: “fight, talk, build.”

The message is that all three countries should aim to fight against irreconcilable militants, talk with those willing to negotiate, and meanwhile keep building on the economic side.

It seems puzzling to me that the Secretary of State should be sent out to gather support for “fight, talk, build” when the proper function of a State Department should be to make the case that with sufficient talking and building first, fighting might not be necessary.  After over ten years of fighting in Afghanistan, the US appears to be confirming with the choice of this phrase that it will fight first and ask questions later.  What could possibly go wrong with that approach?