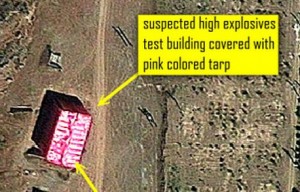 Detail from the photo carried in CNN’s story showing the pink tarp over the building said to contain the blast chamber.

In order to make the case for a military attack on Iran, those who advocate war need to show that Iran is engaged in developing a nuclear weapon. There will be a new IAEA report this week, and we already know that this report will try to whip up excitement around what is already known: Iran’s installation of additional centrifuges for enrichment of uranium to 20% has continued, and Iran now has increased its capacity for such enrichment. What press accounts of the enrichment situation will gloss over is the fact that IAEA inspectors are present at all of Iran’s enrichment sites and that all material is accounted for. That means that in order to accuse Iran of taking 20% enriched uranium and subjecting it to further enrichment to the 90%+ that is needed for weapons, one would have to postulate a secret site, unknown to IAEA inspectors, where Iran could take raw uranium ore all the way to weapons grade.

With the rogue enrichment route to a military attack unlikely to gain footing, war advocates also accuse Iran of other activities aimed at developing a nuclear weapon. A favorite target for those accusations is the military site at Parchin, where one particular building has been separated out and accused of holding a high explosives blast chamber where Iran is accused of carrying out research aimed at developing a neutron trigger device for a nuclear bomb. Despite a very thorough debunking of this theory by b at Moon of Alabama, where it was shown that the chamber was much more likely to be used in production of nanodiamonds than neutron triggers, the accusations continued. In May, George Jahn of AP provided ridiculous “proof” of work on a trigger device by publishing a cartoon (drawn from a real photograph!) and description of the chamber. These new allegations from Jahn even included a claim that there was a neutron detector on the outside of the chamber so that neutron flux from the explosions inside the chamber could be monitored. I showed that this allegation meant that if such work had been carried out, the steel chamber itself would have been made radioactive through the process of neutron activation. This radioactivity would be present throughout the thickness of the steel and therefore could not be removed by a surface cleaning.

Despite the fact that the steel chamber (and possibly even the structural steel of the surrounding building) would be radioactive in a way that could not be cleaned, we have for months been deluged with accusations that Iran is “cleaning” the Parchin site. After this process had gone on for some time, I began to describe it as a game of cat and mouse in which it appears that Iran is having quite a bit of fun at the expense of those who are making allegations about the Parchin site. The primary target of Iran’s pranks in Parchin is David Albright, of the Insitute for Science and International Security. Despite no known expertise in intelligence gathering by photo analysis (and that comment on lack of expertise comes from someone who previously was a CIA photo analyst) we have had multiple accounts from Albright of Iran “cleaning” the Parchin site to remove evidence of their work on a trigger device.

I have responded to most of Albright’s reports, but chose not to respond to his report of August 1, where he declared that Iran had finished its cleanup work at Parchin. That report appears to have been operational for only a brief period, however, as a report issued on August 24 shows images from August 15. In this new report, additional activity at Parchin has taken place and the suspect building is now draped with a tarp that is bright pink.

In keeping with the usual pattern for these accusations, CNN has breathlessly repeated Albright’s analysis. It hardly seems necessary to point out that the point I have been making all along still stands. The most important element of any inspection at Parchin will be the high explosive chamber itself. Iran cannot “scrub” it of neutron activation. That means that if sufficient neutron trigger work was carried out in the chamber to make it radioactive, Iran will need to remove and destroy the chamber. Whether there is a pink tarp over the building or not is irrelevant to the issue of whether the chamber still exists.

The only way Iran can top the comedic spectacle of the pink tarp is to paint the ground outside the building to mimic Albright’s yellow comment balloons and font with a note along the lines of “Please do not look at this building”.

On May 15, I pointed out that the claims associated with the cartoon published by George Jahn of AP purporting to depict a high explosives chamber used by Iran at Parchin (this is a new link for the cartoon, the AP link in the May 15 post no longer works for me) and in a report by David Albright claiming that Iran has taken actions aimed at cleansing the Parchin site were rendered baseless by the likelihood that if the accused work on a neutron initiator for a nuclear weapon had indeed been carried out at Parchin, then the chamber would be rendered radioactive throughout the thickness of its steel by the process of neutron activation. Yesterday, Albright published even more photos of the Parchin site that he claims document further cleansing activity and in the discussion section of his report he finally addressed the issue of neutron activation. In order to make the issue of neutron activation go away, Albright is now proposing that  the uranium deuteride presumed to be present in the explosion would produce too low a flux of neutrons to produce appreciable neutron activation of the chamber’s steel, even though Jahn is claiming that the Iranians placed a neutron detector outside the chamber, presumably to measure the neutron flux that passed through its steel walls.

Here is the relevant portion of a 2009 report by Albright describing the neutron initiator:

If the data in this document are correct and the descriptions of the work are accurate, then this report appears to be describing a plan to further develop and test a critical component of a nuclear weapon, specifically a neutron initiator made out of uranium deuteride (UD3), which when finished (and subsequently manufactured) would most likely be placed at the center of a fission bomb made from weapon-grade uranium. This type of initiator works by the high explosives compressing the nuclear core and the initiator, producing a spurt of neutrons as a result of fusion in D-D reactions. The neutrons flood the core of weapon-grade uranium and initiate the chain reaction.

Albright goes on to describe the issue of producing neutrons and measuring their production:

The measurement of the neutrons emitted by this UD3 source would be the hardest measurement Iran would need to make in developing a nuclear weapon. This assumes that Iran believes it cannot do a full-scale nuclear test, although it would be expected to do a “cold test” of the full device as a way to gain confidence the nuclear weapon would perform as expected. . . The timing of the explosion and resulting shock waves would need to be perfect in order to get enough fusion to create a spurt of neutrons in a reliable manner at exactly the right instant. The experiment itself is very difficult to do. There are relatively few neutrons emitted in a brief period of time and there is a lot of noise from the electronics that interferes with the neutron measurements.

It should be noted here that although Albright is discussing a “cold test”, that means the test is carried out without the weapons grade uranium which the initiator sets off in the nuclear explosion. The uranium deuteride is still present as the primary part of the initiator and is producing the neutrons which are to be measured. Although Albright does claim that few neutrons are produced in the explosion in the latter part of the description, he refers to a “spurt” of neutrons that “flood” the weapons grade uranium in the earlier portion. The fact remains that in such an experiment, significant quantities of uranium are present and there would be neutrons released into the steel of the chamber the entire time the uranium is present, not just during the brief explosion.

As further support for the uranium deuteride initiator being the primary focus of the narrative promoted by Albright and Jahn, it should be kept in mind that Jahn mentions that the chamber is “equipped with” “a neutron detection system outside the explosion chamber to measure neutron emissions”. Jahn goes on to quote another expert who posits the use of uranium in the experiments with explosives: END_OF_DOCUMENT_TOKEN_TO_BE_REPLACED