Peter Maurer, President of the International Committee of the Red Cross, yesterday completed four days of meetings with US officials in Washington. According to the blog site for the ICRC, Maurer met with President Barack Obama, senior members of Congress and a number of high-ranking government figures, including “Secretary of Defense Chuck Hagel, Secretary of Homeland Security Janet Napolitano, Director of National Intelligence James Clapper, Director of the Central Intelligence Agency John Brennan, Deputy Secretary of State William Burns, and Deputy Attorney General James Cole.”

It is perhaps not surprising that since there is a widespread hunger strike at Guantanamo (and since the ICRC visited Guantanamo earlier this month), detention issues were high on the list of topics for the meetings:

A focus of Mr Maurer’s visit was detention-related matters. “The United States, including its Congress, must urgently find a way to resolve all pending humanitarian, legal and policy issues relating to the detention of persons held at Guantanamo Bay, including those deemed to no longer represent a threat that justifies their continued detention there,” said Mr Maurer.

But Guantanamo was not the only topic. It comes as a welcome development to me that Maurer would widen the scope of discussion with key figures such as Obama, Brennan and Hagel to remind them of their duties under international humanitarian law:

“We enjoy a robust and multi-faceted dialogue with the United States, and my visit was an opportunity to discuss issues and contexts of mutual concern such as Syria and Afghanistan,” said Mr Maurer. “The United States values the mandate, positions and input of the ICRC and I am confident that this interaction will continue to bring concrete results, notably in terms of implementation of and respect for international humanitarian law in current and future battlefields.”

Especially when it comes to Obama and Brennan, it is striking that this statement can be construed as saying that the US needs to implement international humanitarian laws and to respect them. Although not stated outright, it is impossible to come to any other conclusion than to believe that the ICRC now believes that the US does not abide by international humanitarian law. I would think that the US practice of targeted killings, which is viewed by the UN as an issue for international law (and where the UN has called “double tap” drone strikes war crimes) would likely have been a topic for Maurer when talking with Brennan, who has played a key role in ordering drone strikes.

Sadly, I don’t share the ICRC’s optimism regarding our government’s respect for the “mandate, positions and input of the ICRC”. We need look no further than the sad news out of Guantanamo yesterday where it now appears that hundreds of thousands of confidential files and communications belonging to Guantanamo defense lawyers have been provided to the prosecution. In addition, a number of key files seem to have disappeared. From Carol Rosenberg: END_OF_DOCUMENT_TOKEN_TO_BE_REPLACED 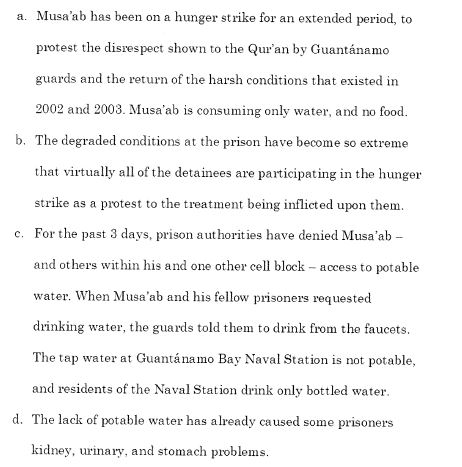