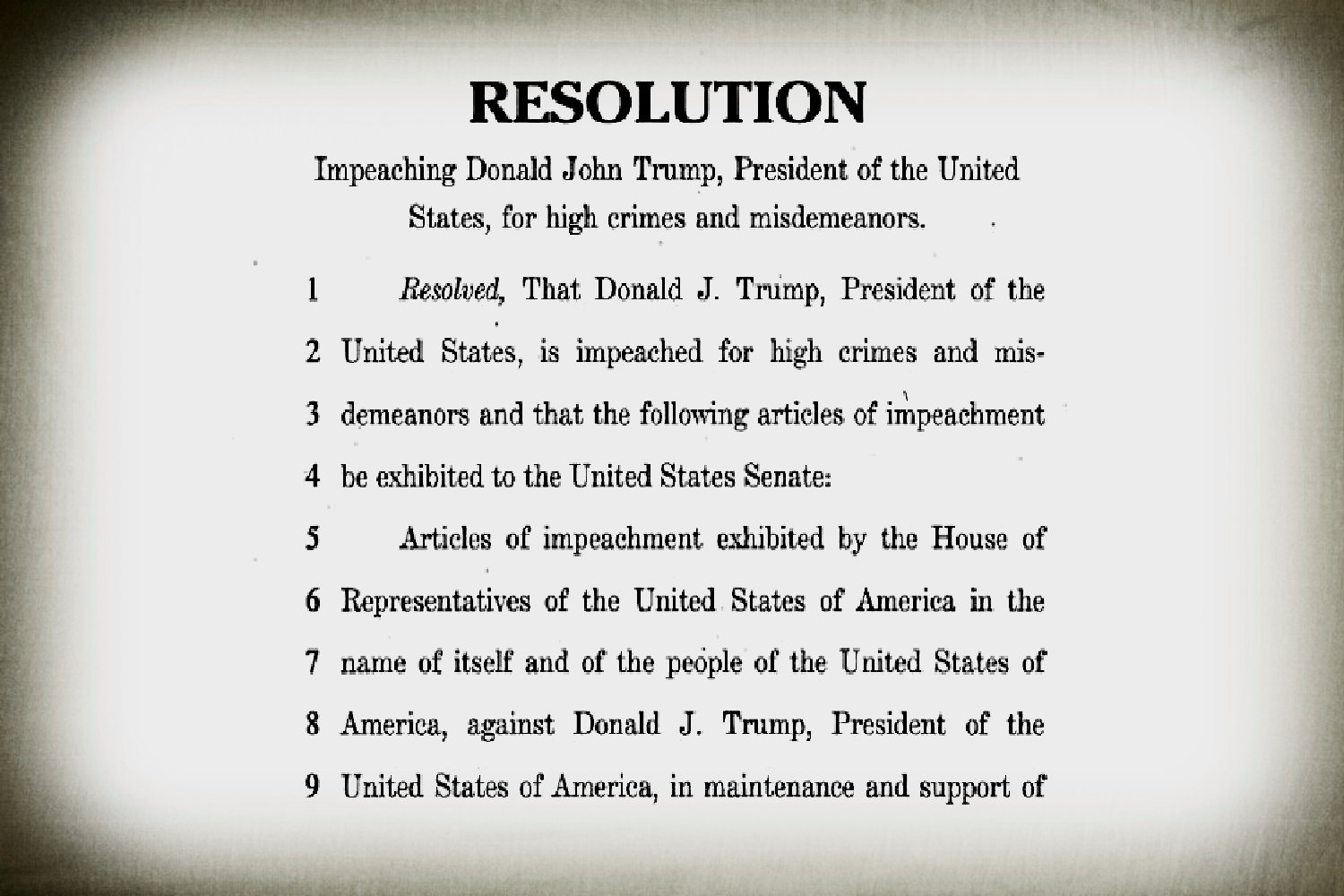 Trump was impeached Tuesday evening under two Articles of Impeachment — one for abuse of power, and another for obstruction of Congress.

Got it. This is pretty straightforward.

The House has “the sole Power of Impeachment” according to Article I, Section 2, subsection 5 of the Constitution.

Understood, no problem. That’s what the House exercised under Nancy Pelosi’s leadership.

We’re now to Article I, Section 3, subsection 6 after last night:

The Senate shall have the sole Power to try all Impeachments. When sitting for that Purpose, they shall be on Oath or Affirmation. When the President of the United States is tried, the Chief Justice shall preside: And no Person shall be convicted without the Concurrence of two thirds of the Members present.

I think we’re all of us watching to see how this shakes out. Since Senate Majority Leader Mitch “Sits on 400 Bills” McConnell said last week he is coordinating the handling of the senate trial with the White House — a gross conflict of interest undermining Congress’s separate powers — and senators like Majority Whip Lindsey Graham have already decided to vote to acquit Trump, it doesn’t make much sense to forward the impeachment if already moot.

It makes sense to hang on to the impeachment articles until there is clarification about the Senate acting in good faith, “on Oath or Affirmation” as Article I, Section 3, subsection 6 says.

Now we arrive at my first question: is Trump still qualified to run for re-election?

Judgment in Cases of impeachment shall not extend further than to removal from Office, and disqualification to hold and enjoy any Office of honor, Trust or Profit under the United States: but the Party convicted shall nevertheless be liable and subject to Indictment, Trial, Judgment and Punishment, according to Law.

Emphasis mine. Does “judgment” refer solely to conviction by the Senate after a trial once the impeachment has been forwarded to them? Or is the “judgment” when the impeachment has been pronounced by the House since the House has the sole power of impeachment? The Constitution says “Indictment, Trial, Judgment and Punishment” in subsection 7 but the wording, “Judgment in Cases of impeachment” may not mean “Judgment in Cases of conviction” — the latter would clearly limit the outcome of the House’s impeachment to a pre-indictment or indictment determination before the Senate’s trial.

This subsection occurs under Section 3 which defines the Senate’s composition and its most fundamental powers — specifically, trying the subject after impeachment — so we might assume this is the Senate’s “judgment.” But the Constitution’s wording is muddy.

My second question relates to a point Robert Reich made about a pardon for the impeached president:

… Regardless of whether a sitting president can be indicted and convicted on such criminal charges, Trump will become liable to them at some point. But could he be pardoned, as Gerald Ford pardoned Richard Nixon 45 years ago?

Article II, section 2 of the Constitution gives a president the power to pardon anyone who has been convicted of offenses against the United States, with one exception: “In Cases of Impeachment.”

If Trump is impeached by the House, he can never be pardoned for these crimes. He cannot pardon himself (it’s dubious that a president has this self-pardoning power in any event), and he cannot be pardoned by a future president.

Even if a subsequent president wanted to pardon Trump in the interest of, say, domestic tranquility, she could not. …

Apart from the specific reference to the House’s sole power to impeach, is this why the two Articles of Impeachment do not use the words “bribery” or “extortion” to describe what Trump did with regard to Ukraine — to limit the described crimes against the U.S. for which Trump could be pardoned by an interim successor or the next elected president?

Or if the crime(s) have not been spelled out in an impeachment, identified as a violation of specific U.S. law, can Trump still be pardoned for them, in essence given carte blanche after the fact?

Is this why the Articles were scoped so narrowly, to prevent an over-broad pardon?

So often it’s said the president’s pardon power is absolute, but impeachment appears to place the single limit. Where and when is that limit placed?

These questions have been chewing at me since Pelosi’s second gavel upon completion of the vote on the second article. I imagine the Republican Party will do as it’s done since 2015: roll over and let Trump run an obnoxious and corrupt re-election campaign, looking every bit as repulsive as he did Tuesday evening during his Battle Creek rally.

It’s also been niggling at me that twice in the text of the Articles of Impeachment it was written, “the President ‘shall be removed from Office on Impeachment for, and Conviction of, Treason, Bribery, or other high Crimes and Misdemeanors’.”

Shall, not may, be removed, on conviction for Bribery.

I noted also the use of the word “betrayed” in the Articles’ text:

… He has also betrayed the Nation by abusing his high office to enlist a foreign power in corrupting democratic elections. …

It’s not treason as we’ve discussed in comments, but a traitor shouldn’t get a pass for selling out his country’s national security interests for personal gain.

You can bet McConnell and Graham would already have ensured the conviction and removal of a Democratic president who likewise betrayed the nation. If only they moved with the same alacrity on those 400 bills sitting on McConnell’s desk.

‘That‘ — I can’t even come up with a family-friendly term for the tsunami of crap Trump set in motion this week.

Last evening, the Washington Post reported that Trump has asked his attorneys about the limits of presidential pardons while they look for ways to undermine the legitimacy of Robert Mueller’s Russia investigation.

Ditto attorney Marc Kasowitz, though depending on who you read, he’s either ‘left’ or taken a ‘lesser role’.

Sandwiched between NYT’s one-two punch and last night’s WaPo piece are pieces sure to increase pressure.

Like Bloomberg’s report that Mueller is looking into Trump’s business transactions.

(Side note: I have a problem with Bloomberg’s piece in particular as it claims the stock market responded negatively to the reporting about Trump. Really? There’s nothing else going on, like news about Apple, Netflix, Musk’s Boring, skittishness ahead of GE’s earnings, Carrier’s layoffs, so on, which might concern the market? Oh, Exxon‘s little hand slap…right. Nah.)

I don’t know how we stay ahead of this wave. But after learning

— Trump wouldn’t have nominated Sen. Jeff Sessions to attorney general if he’d known in advance Sessions would recuse himself;

— Trump thinks Mueller investigating his family’s finances is too far;

— Less than 179 days in office, Trump was already considering the use of presidential pardons for family;

it’s time to ask Congress to revisit the independence of special counsel under the Ethics in Government Act of 1978 to assure Mueller’s investigation is completely out of reach of the White House and its compromised attorney general. As the law addressing the special counsel currently exists, the role remains under the purview of the attorney general. This is increasingly problematic, given Trump’s statements about Sessions’ recusal, which may be construed as a form of intimidation.

Yeah, yeah, Scalia thought the independent counsel was an overreaching breach between the legislative and executive branches. But Scalia likely never foresaw this level of insanity, stupidity, and criminality in the White House, combined with an utterly flaccid majority party, either complicit or unwilling to perform oversight within its powers and purpose. In his dissent of Morrison v. Olson, Scalia wrote,

It is the proud boast of our democracy that we have “a government of laws and not of men.” …

What happens when the executive office ignores or violates laws, and Congress turns a blind eye? What backstop is there to assure the ‘government of laws’ continues to execute the law in spite of the failure of men charged with creating and upholding the laws?

“Yep. These leaks are partially intended to test the boundaries of what he can get away with. Like w/ Comey firing, silence is acquiescence.” [bold mine]

It’s not on Congress alone, though, to hold fast the boundaries on executive power. It’s on citizens to demand Congress demonstrate limits as representatives of the people.

As mentioned in the blurb, this is an open thread.