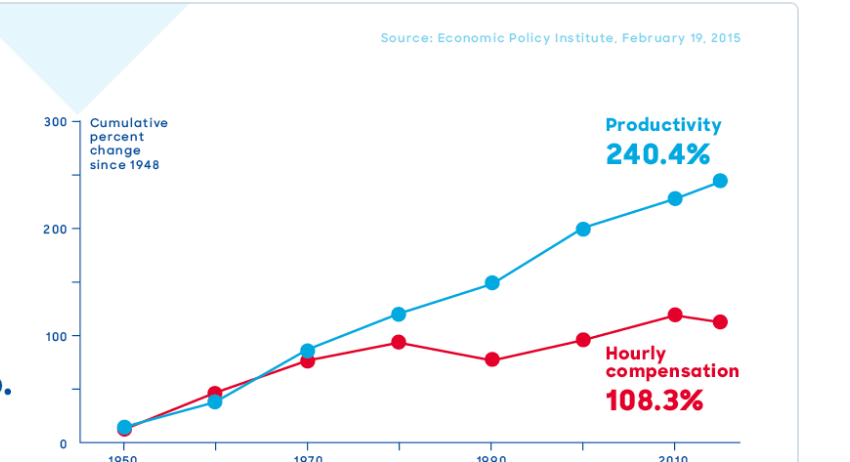 At one level, this is just a version of the economic maxim that markets pay people what they are worth. In this case, the argument is that the productive people get the increased rewards. In the case of exercise of market power, this means that some people benefit from exercise of market power, and we know it isn’t the producers of the goods and services; it’s the people at the top, holders of debt and equity, and financiers.

At another level, it says that companies can’t pay higher wages unless workers increase their productivity. And certainly not at the expense of returns to capital.

Economists used to think there was some magic connection between productivity and wages. That was generally true for some time. But, as this This chart shows the relationship between wages and productivity split beginning around 1980, while productivity was growing rapidly.

That’s just after Paul Volker, then Fed Chair, raised interest rates to ludicrous levels. At the same time, economists were preaching that the problem facing the economy was inadequate levels of capital. So Reagan and the Republicans, along with plenty of complicit Democrats, slashed taxes on the rich, reduced regulations, deregulated industries, and clobbered unions. At the same time, they increased taxes on the working people of the country by increasing FICA taxes.

By 2010, global capital had swollen to some $600 trillion, tripling over the past two decades. Today, total financial assets are nearly 10 times the value of the global output of all goods and services. …

Our analysis leads us to conclude that for the balance of the decade, markets will generally continue to grapple with an environment of capital superabundance.

This article estimates total financial assets at about $294 Trillion in 2014. And, of course, banks have an almost unlimited capacity to lend for any useful purpose. There is certainly no shortage of capital today.

Once capital achieves a new baseline of return, it doesn’t drop back without a bitter fight, sometimes just political, but always with the threat or reality of physical violence. That’s how labor got its share in the first place, a fact no one wants to talk about. When was the last time you heard an economist discuss the violence in the coal fields, the violence that won miners safer working conditions and better wages. Once labor loses its power, workers can’t defend themselves, and can’t force the rich to share the benefits that flow from any level of productivity, whether or not that level is increasing. And indeed, the rich are now taking all the gains from productivity and more, the labor participation rate is at pre-1980 levels, and wages have been stagnant for decades. Even so, all discussion about wages is centered around increasing productivity, as if it mattered to workers when all the benefits flow to the richest among us.

One school of thought blames workers, saying they have to increase their training and preparation for the work force. A kinder version blames hysterisis effects, the idea that when workers are unemployed for extended periods, they lose their skills. The Republican answer is invest in yourself, borrow money, and get that training. Of course, you take all the risks, for example, whether you can master the schooling, or figure out what training might get you a job, or find a school that will actually train you, and by the way, if you fail, you still have to pay until you die. The Democratic version is jobs training, but that’s only sporadically available, and it’s always underfunded and rarely useful, thanks to the neoliberals in both parties. As to the older people in the workforce who can’t retrain, and can’t move to where there are jobs, both parties do nothing. We don’t just blame the victims, we ignore them, and treat them as losers who deserve nothing.

Many of the 23 economic writers cited in the Focus Economics article, and the other experts it discusses, say the problem is inadequate business investment. So the solutions offered are centered around stimulating demand and cutting taxes and regulations. No one explains how this solves the problem of the rich taking all the gains.

There are few outside the box observations. A couple of the writers think maybe the problem is that there are too many low-productivity jobs available, and too few high-productivity jobs. People see the available jobs as dead-end, and their treatment as demeaning, and they don’t do more than the absolute minimum necessary to get that minuscule paycheck. Another writer points out that the next wave of capital investment is not going to make people more productive, it’s going to replace them. I assume he means industrial robots, for the short term at least.

Another suggests that we are already very efficient at a lot of things, and in those areas, improvements in productivity won’t make much difference. In areas we aren’t very efficient at, it’s going to require something enormous to make a difference, or we would already done it. John Quiggan says that the financial sector has separated itself from the productive sector, which seems true. You can almost hear the words “Vampire Squid”. All these are intractable problems.

But I think the problem is different. The economic orthodoxy is that capital is always efficient, while labor is always bloated, lazy, indifferent, greedy, demanding, corrupt and insufferable. That was and is the rallying cry of the union-busters, and you can hear it today. That is a perfect description of the capitalists of today. They don’t want to take risks. They want protected markets, special tax treatment, immunity from criminal prosecution and civil suits, and they have the money to pay off politicians to get that and more. They want all the money. They don’t want to pay their share. They want the right to wreck the economy with impunity. They want the right to screw consumers into the ground. They want the right to destroy the environment. And they want to make all the decisions about the future.

We have the power to solve that problem if we have the will.

Update: after I posted, I ran across this astonishing article by Michael Hiltzik at the Los Angeles Times, discussing the reaction of Wall Street analysts to American Airlines decision to increase pay to its pilots and flight attendants. Do read it.