Reagan’s Republican Revolution and the Death of the American Dream

On August 3, 1980, Ronald Reagan delivered a watershed speech (pdf) as the presidential campaign entered its final three months. The most often-quoted passage of the speech is his siren call to states’ rights:

I believe in state’s rights; I believe in people doing as much as they can for themselves at the community level and at the private level. And I believe that we’ve distorted the balance of our government today by giving powers that were never intended in the constitution to that federal establishment. And if I do get the job I’m looking for, I’m going to devote myself to trying to reorder those priorities and to restore to the states and local communities those functions which properly belong there.

As William Raspberry noted on the occasion of Reagan’s death in 2004, both the call for states’ rights and the location chosen for delivering the speech had powerful racial overtones:

Philadelphia, county seat of Mississippi’s Neshoba County, is famous for a couple of things. That is where three civil rights workers — Michael Schwerner, James Chaney and Andrew Goodman — were murdered in 1964. And that is where, in 1980, Republican presidential candidate Ronald Reagan chose to launch his election campaign, with a ringing endorsement of “states’ rights.”

It was bitter symbolism for black Americans (though surely not just for black Americans). Countless observers have noted that Reagan took the Republican Party from virtual irrelevance to the ascendancy it now enjoys. The essence of that transformation, we shouldn’t forget, is the party’s successful wooing of the race-exploiting Southern Democrats formerly known as Dixiecrats. And Reagan’s Philadelphia appearance was an important bouquet in that courtship.

Raspberry rightfully notes the Southern strategy preceded Reagan, originating during the Goldwater and Nixon campaigns and he even noted that when considering Reagan, Raspberry “used to find myself almost believing he wasn’t truly responsible for the bad outcomes of his policies.” But the bottom line is that the movement Reagan catalyzed had horrific racial consequences. Even worse, the Reagan movement also initiated changes that in the intervening 36 years have resulted in the virtual destruction of the middle class and the transfer of most of America’s wealth into the hands of a very select few.

Even the pivotal Philadelphia, Mississippi speech sowed the the seeds for this destruction, as well. The very next paragraph in the transcript after the snippet quoted above shows how the process started:

I’m going to try also to change federal regulations in the tax structure that has made this once powerful industrial giant in this land and in the world now with a lower rate of productivity than any of the other industrial nations, with a lower rate of savings and investment on the part of our people and put us back where we belong.

Going back to look at the historical record on several fronts shows how these basic tenets of Reaganism from his Philadelphia speech resulted in massive institutional racism and the destruction of the middle class.

The powerful Republican dog-whistle of states’ rights was implemented in the Reagan era on many fronts, but is illustrated most succinctly when we look at data on imprisonment of Americans.

The figure below, from the Prison Policy Initiative, has been making the rounds recently as the Sanders and Clinton camps have argued over the effects of the 1994 crime bill passed during Bill Clinton’s first term: 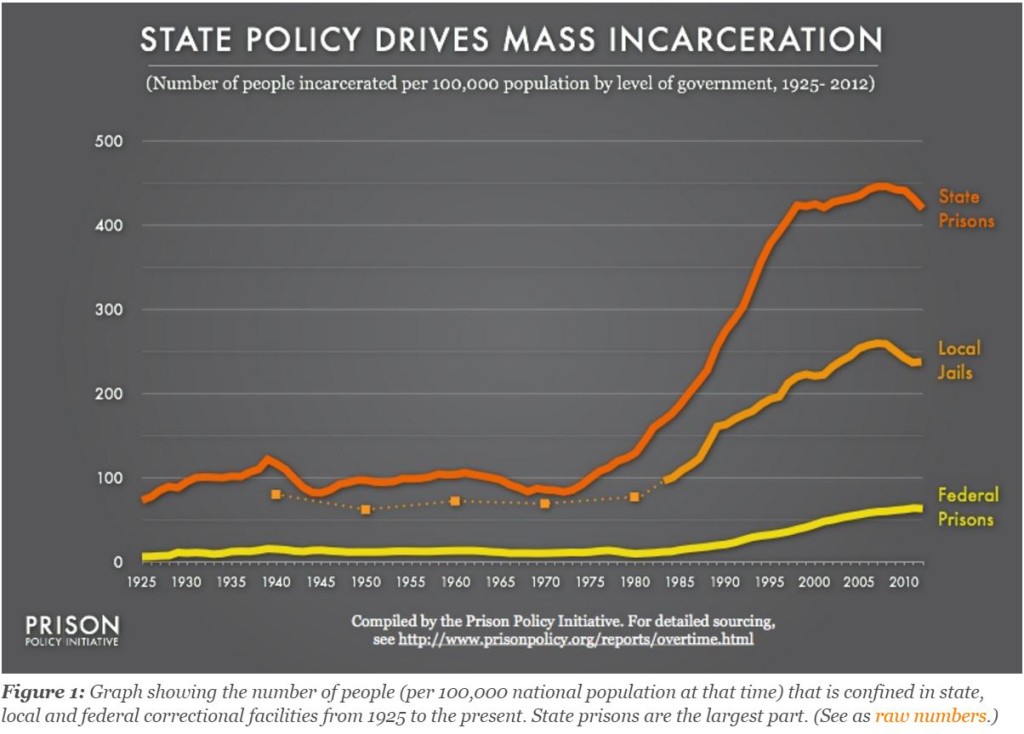 US imprisonment rates, especially at the state level, began a steep rise in the 1980’s.

There is an uptick in state prison population in the 1970’s that is attributed to Nixon’s War on Drugs, but the rate doesn’t exceed historical bounds until the momentum from the wave of Reganism hit the states after the 1980 election. States began filling prisons at an unprecedented rate. But states were not imprisoning people randomly. The racial breakdown of those imprisoned is staggering: 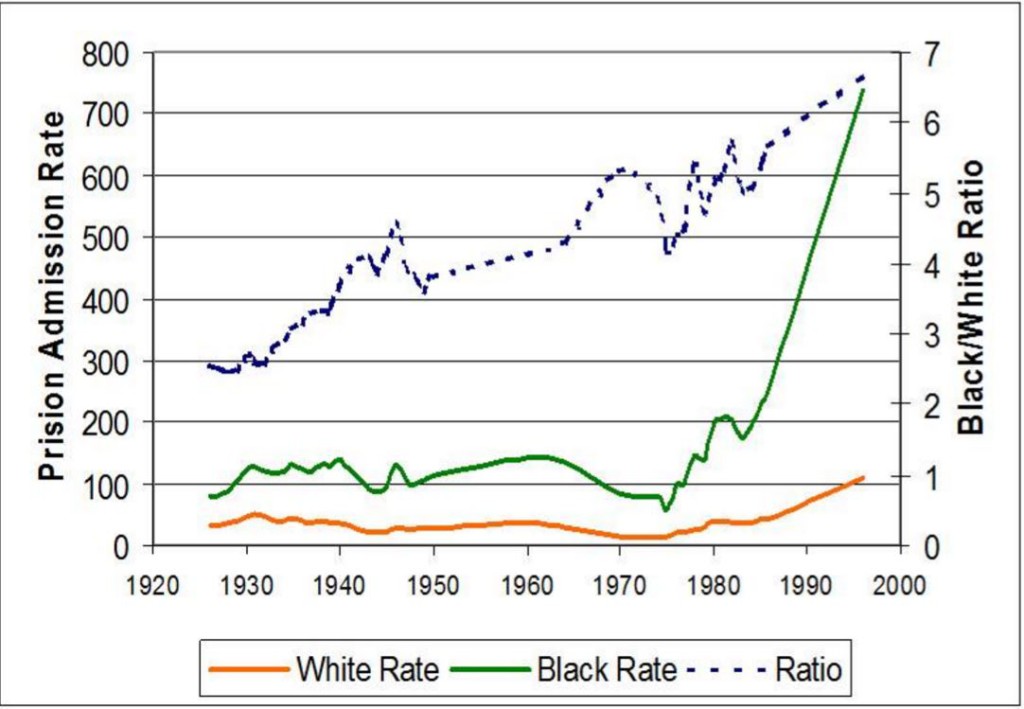 Again, as seen in overall state prison populations, the increase in incarceration of black citizens starts in the 1970’s but only exceeds historical bounds in the 1980’s and beyond. [Note: I am fairly certain that this figure is based on Bureau of Justice Statistics data and have included a link to the blog from which I lifted it, but I have not been able to find a credit for who prepared it. If anyone finds the original source, please provide a link in comments.]

It’s not a huge stretch at all to see the implementation of states’ rights here. States chose to use their rights imprison blacks. At the same time this was happening, the newly racist Republican Party was making massive gains in the south. This figure from Ballotpedia summarizes the process very well: 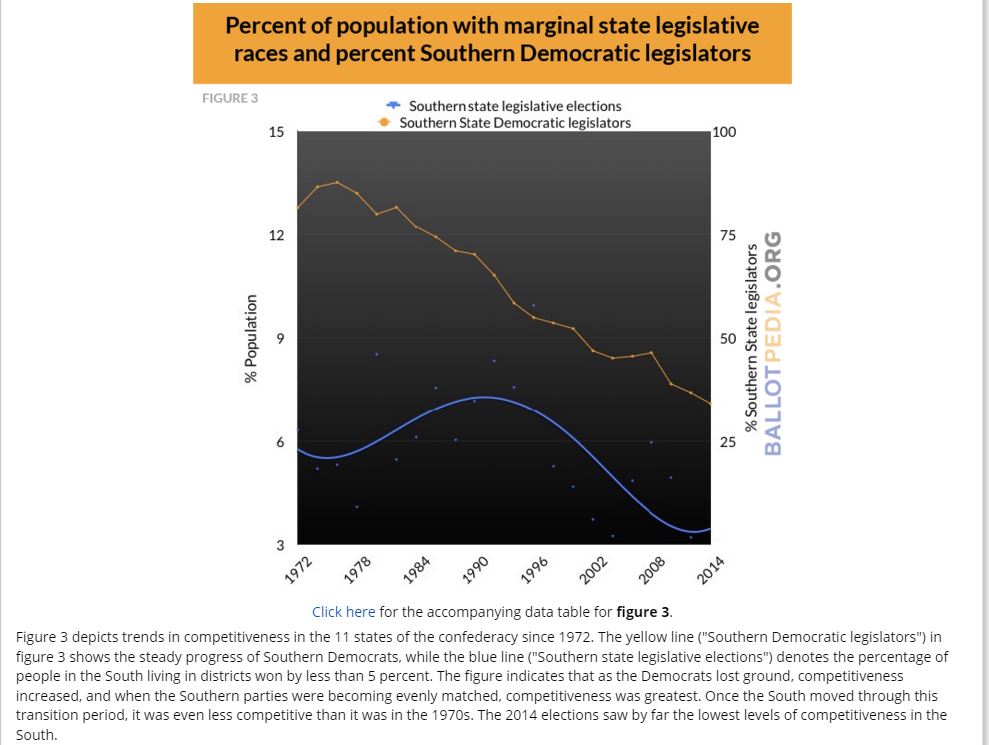 Ballotpedia shows how loss of Southern Democrats led to fewer close elections in the south. (Click image for larger view)

So as more Dixiecrats became Republicans in the south, Republicans came to dominate elections there. And prospects for that changing are very bleak, as their overwhelming majorities are now ensured through gerrymandering. Stephen Ansolabehere of Harvard and Maxwell Palmer of Boston University analyzed gerrymandering over the past 200 years (pdf). They found that currently, about 20% of districts are gerrymandered as badly as the original that lent the process its name:

This pattern has been fairly steady over the past 200 years, but has worsened since the 1970s. We also show a strong relationship between non-compact districts and Democratic vote share in Congressional elections; Democratic districts tend to be less compact than Republican districts.

In cementing their power, southern Republicans have gerrymandered districts to the point that very few elections in the south are closely contested any more. By making very non-compact Democratic districts, they have cut minority votes out of districts where they could provide some balance and moved them into districts that are very few but overwhelmingly Democratic.

Reagan was able immediately to carry through on his stated desire to change tax rates. And his impact on rates has been lasting: 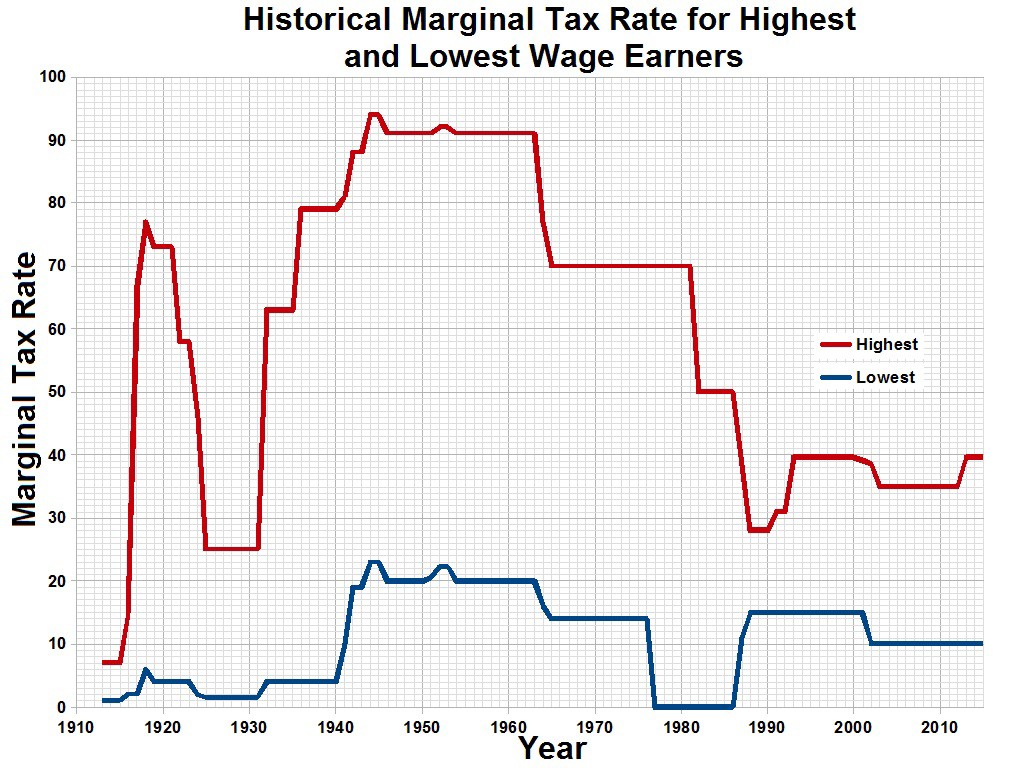 Reagan lowered the highest tax rates dramatically and they have not returned to pre-1980 levels yet.

In two steps, Reagan lowered the highest marginal tax rate from 70% to less than 30%. This was a massive windfall for the wealthy. Even worse, before Reagan left office in 1988, the tax rate for the lowest income group went up from the zero level when he entered office.

Of course, income tax policy alone doesn’t account for all of the wealth transfer that has taken place since Reagan took office, it is merely one facet of the overall process. The end result, though, is staggering and wealth transfer from the lower 90% of Americans to the top 0.1% most definitely began its devastating current effect in 1980: 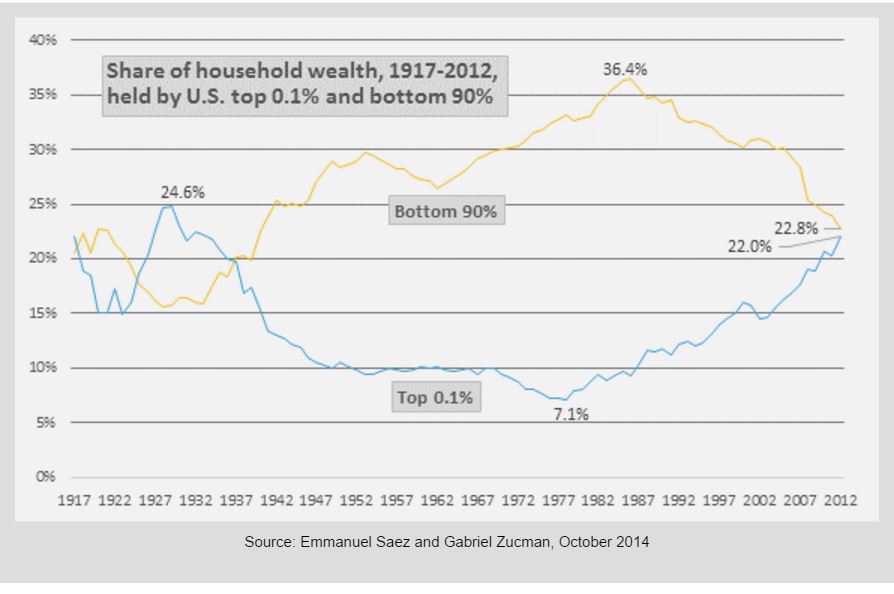 Transfer of wealth to the 0.1%

Note that from the 1940’s to the early 1970’s, wealth for the top 0.1% held steady while the bottom 90% saw a steady increase in their overall wealth. The top 0.1% took a slight hit in the later 1970’s, but then reversed course just before 1980, with their increase really accelerating in the Reagan years. Remarkably, the lower 90% still saw their wealth increase early in the Reagan years, but began a precipitous decline right as the lowest income earners began being taxed again late in Reagan’s second term.

The end result today of this process of wealth transfer is devastating. With no more middle class, we have seen a recent uptick in deaths from drug use and suicide among the former working class whites as the stark lack of options becomes clear:

The least educated also had the most financial distress, Dr. Meara and Dr. Skinner noted in their commentary. In the period examined by Dr. Deaton and Dr. Case, the inflation-adjusted income for households headed by a high school graduate fell by 19 percent.

With the pain and mental distress data, Dr. Deaton said, “we had the two halves of the story.” Increases in mortality rates in middle-aged whites rose in parallel with their increasing reports of pain, poor health and distress, he explained. They provided a rationale for the increase in deaths from substance abuse and suicides.

Given the desperate state of affairs for most Americans, it seems no surprise that two of the three highest polling candidates in the 2016 election are seen as revolutionary figures. Both campaigns of revolution seem to depend quite a bit on the realization that the middle class has been excluded from both wealth and political power. The Trump and Sanders campaigns, however, have very different takes on how we got where we are. This tweet by Dan Froomkin quoting and responding to one by Greg Sargent sums it up perfectly: 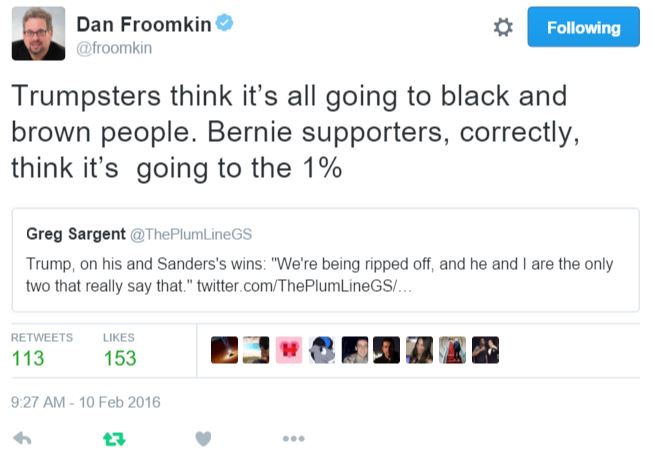 Given the dire state of affairs for the bulk of Americans and the increasing realization that the current status quo allows little or no hope of improvement, it’s hard to see how 2016 doesn’t become another inflection point on many fronts of society. It is my sincere hope that this time the huge changes result in better conditions for our fellow citizens, but there is no way to predict how it will play out.

I’d take Raspberry’s early musings about Reagan a bit further and say that we don’t have to declare whether we think Reagan intended for his political movement to have the devastating consequences that followed. In fact, as mentioned, much of the early racism of the Southern strategy predated Reagan’s run. But we cannot be mistaken about the fact that the political climate created by Reagan’s movement did indeed bring about these changes and that many of the more recent participants seem to be much more overt about their intent.

Many will also argue that the few fronts on which I’ve chosen to present data are not the only moving forces that got us to where we are today and that many factors beyond Reaganism are responsible. The fact remains however, that at least for the areas discussed here, there is a remarkable coincidence in time betweeen the Reagan movement ascending to power and these measures of well-being starting their horrific decline.