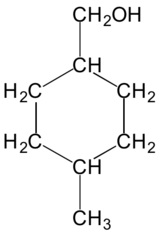 Structure of 4-methylcyclohexane methanol via Wikipedia.

Some of the more than 300,000 residents of West Virginia who could not drink or bathe in their tap water derived from the Elk River have been told that it is now safe to do so. Considering how flawed the process was for coming up with the standard for a safe level of the contaminant, 4-methylcyclohexane methanol (MCHM), it should come as no surprise that residents are not buying the claim that the water is now safe:

But that doesn’t mean he’s ready to use it again.

Five days after a chemical spill into the Elk River left water unusable for 300,000 West Virginia American Water customers in nine counties, some residents are still wary of using the water even after officials say it’s safe again.

Water company and state officials say the water consistently tested below 1 part per million of the chemical, and have been lifting the water-use ban zone by zone. Six zones, mostly in Charleston and South Charleston, had been lifted as of Tuesday evening.

Here’s a summary of the flawed process for coming to that one part per million “safe” standard:

Unfortunately, the science behind this standard remains unclear.  Based on what we do know, there are good reasons to believe that officials are overlooking significant health risks.

We know, for example, that the manufacturer’s Material Safety Data Sheet (MSDS) that officials say they are using as their primary source lacks any information about chronic health impacts. The major federal databases we consulted suggest such data simply do not exist for this chemical.

It also appears that officials made significant leaps in their calculation of a “safe” exposure level – including assumptions that deviate from generally accepted practices.  As a result, these estimates fail to adequately account for either acute or chronic health effects from ongoing exposure to water contaminated at the 1 ppm level.

At a bare minimum, the public deserves to know a lot more about the calculations behind officials’ insistence that a 1 ppm level in drinking water is safe.

But how did we get to this situation in the first place? The event that caused the ongoing contamination of the Elk River was a leak of thousands of gallons of MCHM from a facility owned by a company with the wonderfully Galtian name of Freedom Industries. Of course there is a bald eagle anchoring their website! Would you expect anything else?

How is the chemical used? It is used to perpetuate the myth of “clean coal”. Our government is even a leading crusader for this myth and boasts a nifty gif to show us how coal can be “cleaned”.

One of the main methods of producing “clean coal” is to remove particles of sulfur. From the DOE website with the nifty gif:

Take sulfur, for example. Sulfur is a yellowish substance that exists in tiny amounts in coal. In some coals found in Ohio, Pennsylvania, West Virginia and other eastern states, sulfur makes up from 3 to 10 percent of the weight of coal.

One way is to clean the coal before it arrives at the power plant. One of the ways this is done is by simply crushing the coal into small chunks and washing it. Some of the sulfur that exists in tiny specks in coal (called “pyritic sulfur ” because it is combined with iron to form iron pyrite, otherwise known as “fool’s gold) can be washed out of the coal in this manner. Typically, in one washing process, the coal chunks are fed into a large water-filled tank. The coal floats to the surface while the sulfur impurities sink. There are facilities around the country called “coal preparation plants” that clean coal this way.

It appears that the MCHM is used sometimes instead of water in this process. But even after this “washing”, the coal is far from clean: END_OF_DOCUMENT_TOKEN_TO_BE_REPLACED