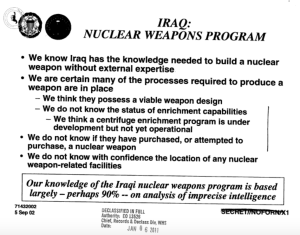 Earlier this week, Politico did a story on a report done for Donald Rumsfeld in summer 2002 about what the Joint Chiefs of Staff’s Intelligence team knew about Saddam’s WMD program.

There are two specifics of significant note the Politico report doesn’t get into. First, it notes that the report itself was dated September 5 and Rumsfeld passed it on to Richard Myers, saying, “It is big” on September 9. But it neglects one significant detail about the date.

The report said “we think a centrifuge enrichment program is under development but not yet operational.” Someone — presumably either Rummy or Myers — marked that passage in the Powerpoint. That same person also marked an earlier slide that said “Our assessments rely heavily on analytic assumptions and judgment rather than hard evidence,” though that person did not mark the following line that read, “The evidentiary base is particularly sparse for Iraqi nuclear programs.”

Those dates are significant, however, because between the time the report was finished on September 5 and Rummy passed it on on September 9, both he and Myers did the Sunday shows as part of the aluminum tube bonanza, which itself was premised on the claim that Iraq had tried to obtain those tubes because they “were intended as components of centrifuges to enrich uranium.” (On Saturday, at least Rummy and possibly Myers spent the day at Camp David with other top Bush officials and Tony Blair planning to get their war on.)

To be fair to them both, they didn’t say anything that greatly varied from this report (in any case, both may not have read it yet) or even directly address the centrifuge story.

The secretary also asserted that Iraq is on the list of the world’s terrorist states, and under Saddam Iraq continues to possess chemical and biological weapons, and seeks to acquire nuclear arms, as well. As such, he said, Iraq represents a clear and present danger to America — and to the world.

Show host Bob Schieffer asked Rumsfeld if the United States was close to going to war against Iraq. The secretary said President Bush has decided that a regime change in Iraq is necessary, but hasn’t yet decided how it would be accomplished. The nation’s leader is slated to go before the United Nations to “make what he believes to be is a recommendation to the international community and to the world” about what to do about Saddam and Iraq, Rumsfeld said.

Iraq, Rumsfeld said, has invaded its neighbors, persists in violating U.N. resolutions it had agreed to, and continues to amass weapons of mass destruction, creating a significant problem for the international community.

The world can approach the problem of Saddam in a number of ways, Rumsfeld remarked. However, he emphasized that he agrees with the president in that doing nothing is not an option.

People seeking a “smoking gun” — absolute, conclusive evidence that Saddam has nuclear weapons — Rumsfeld noted, is like developing a case in a court of law by proving a person’s guilt without a reasonable doubt.

“The way one gains absolute certainty as to whether a dictator like Saddam Hussein has a nuclear weapon is if he uses it. And that’s a little late,” Rumsfeld emphasized.

The secretary pointed out how some U.S. intelligence on Iraqi capabilities may not be revealed to the public for good reason. Putting certain intelligence out to the public could “put people’s lives at risk,” he noted. However, the secretary said more information about Iraq would likely become known in the days and months ahead.

Rumsfeld noted there is also “a category of things we don’t know.” After Operation Desert Storm, he noted, American officials discovered that Saddam was six months to a year away from developing a nuclear weapon. The best previous intelligence had estimated it would take two to six years for Saddam to obtain a nuclear bomb, Rumsfeld said. [my emphasis]

Indeed, while Rummy used a variant of the “smoking gun” line Condi Rice used, he presented it more as a legalistic phrase than the fearful line the National Security Advisor delivered it as. He stressed that US intelligence was withholding information. And he admitted that there was stuff “we don’t know,” though suggested that in the past the stuff we didn’t know ended up being that Saddam was closer to getting nukes than previously believed.

And Myers, too, emphasized Saddam’s quest to improve his nuke program.

Air Force Gen. Richard B. Myers, chairman of the Joint Chiefs of Staff, reiterated to ABC This Week host Sam Donaldson that Saddam Hussein has chemical and biological weapons.

“He’s going to go to any means to do that, we think,” he said. “Our estimate is at this point he does not have nuclear weapons, but he wants one.”

Basically, though, it appears that after Rummy and Myers had just been put on the Sunday shows to reinforce the hysteria Condi and Cheney were sowing, Rummy read a report and learned that his own intelligence people were none too sure about what he and Myers had just said, at which point he sent it to Myers and said “it is big.” 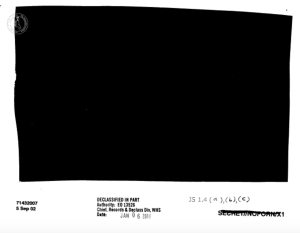 At that point, it was probably too late.

The other thing Politico didn’t note, however, is that the actual Powerpoint was not entirely declassified. Indeed, the entire last page was redacted under 1.4 a, b, and c exemptions.

1.4(a) military plans, systems, or operations;

I suspect the redacted information either cites the equally dubious British intelligence claiming Saddam had WMD or that it invokes Saddam’s ties to terrorism (which both Rummy and Myers did mention in their Sunday appearances). If it’s the latter, it would mean the government is still trying to hide — as it is with a letter Carl Levin tried but failed to get declassified before he retired — the utterly bogus claims about Saddam having ties to Al Qaeda that were partially used to justify the war.

All of which is to say, we know that Rummy probably learned a bit more about what his unknown unknowns immediately after going on a the Sunday shows making a claim about known unknowns. But there’s still something about what Rummy didn’t know that we don’t know.

Remember that series of stories from ABC about Bush’s top advisors choreographing torture techniques with Bush’s explicit approval? I know it’s hard to remember those stories what with your rabid obsession with flag pins and whatnot.

As a reminder, I had wondered who from the Principals Committee might have served as a source for ABC. Well, the Guardian just published this (h/t Ellie).

The US’s most senior general was "hoodwinked" by top Bush administration officials determined to push through aggressive interrogation techniques for terror suspects held at Guantánamo Bay, the Guardian can reveal.

• Myers believes he was a victim of "intrigue" by top lawyers at the department of justice, the office of the vice president, Dick Cheney, and Donald Rumsfeld’s defence department.

• Myers wrongly believed interrogation techniques had been taken from the army’s field manual.

The lawyers who pushed through the interrogation techniques – all of them political appointees – were Alberto Gonzales, David Addingon and William Haynes.

The Bush administration has tried to explain away the ill-treatment of detainees at Guantánamo and the Abu Ghraib prison, in Baghdad, by blaming junior officials.

Sands establishes that pressure for the aggressive and cruel treatment of detainees came from the very top and was sanctioned by the most senior lawyers.

Myers, the most senior military officer of the most powerful country in the world, was one top official who did not understand the implications of what was being done.

Sands, who spent three hours with the former general, describes him as being "confused" about the decisions that were taken.

"As we worked through the list of techniques, Myers became increasingly hesitant and troubled," Sands writes. "Haynes and Rumsfeld had been able to run rings around him."

Myers and his closest advisers were cut out of the decision-making process, so he was not given sufficient opportunity to object to measures he now says he strongly disapproved of.

He did not know that Bush administration officials were changing the rules allowing interrogation techniques, including the use of dogs, amounting to torture.

"We never authorised torture, we just didn’t, not what we would do," Myers said.

This piece certainly makes it clear that Myers would like to blame others for the torture regime in the US.

END_OF_DOCUMENT_TOKEN_TO_BE_REPLACED

rincewind made an important point in my post on the torture briefings. At least one of the sources for the story must be one of the briefees, not a briefer. rincewind points to these two quotes that come from someone within the committee.

“It kept coming up. CIA wanted us to sign off on each one every time,” said one high-ranking official who asked not to be identified. “They’d say, ‘We’ve got so and so. This is the plan.’”

“These discussions weren’t adding value,” a source said. “Once you make a policy decision to go beyond what you used to do and conclude it’s legal, (you should) just tell them to implement it.”

This source obviously considers himself as one of the people receiving the briefing, which further suggests this source is not in the CIA.

As luck would have it, via Troutfishing’s diary and this McGovern piece, I checked out this February 7, 2002 memo in which Bush declares that Al Qaeda will not be entitled to Geneva Convention protections. The memo seems to indicate that it is addressed to all the people who have participated–at least thus far–in discussions on torture; it refers to "our recent extensive discussions regarding the status of Al Qaeda and Taliban detainees." Now check out the list of addressees:

In other words, two of the people whom Bush noted as being involved in "extensive discussions regarding the status of Al Qaeda and Taliban detainees" are not included in the list ABC News gave of the attendees of the meetings that took place slightly later in 2002: Andy Card and Richard Myers. Either is a possibility to be the "high-ranking official" who objected to the repeated discussions of what techniques to use. Certainly, Myers is on the record as having opposed the decision not to extend Geneva Convention protections to Al Qaeda (most recently in reports from Feith’s book). And he would count as "high-ranking" in more than one sense (though neither he, nor Card, is still an official, after all).