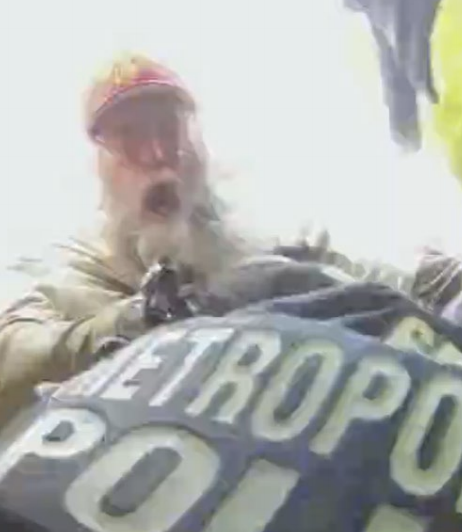 At 3:38 on January 6, according to the Proud Boy leaders conspiracy indictment, Charles Donohoe announced on the 60-member operational Telegram channel the Proud Boys used that day that, “we are regrouping.”

Sometime around that time, a bunch of Oath Keepers, having already entered the Capitol, were gathered together on the east side of the Capitol.

According to the most recent Oath Keepers indictment, two minutes after Donohoe announced the Proud Boy plan to regroup, at 3:40, Oath Keeper Joshua James called Person Ten — who was doing much of the coordination for the Oath Keepers that day — and had a 3 minute, 4 second phone call, their second longest call described in the indictment.

Roberto Minuta and Rhodes exchanged two calls just after 4:00 — 42 seconds, then 2 minutes 56 seconds. At 4:10, according to a Thomas Caldwell detention motion, someone on the Oath Keepers’ operational channel said, “Fight the good fight. Stand your ground.”

It seems the militias were preparing for a second, seemingly coordinated, operation of the day: resuming the assault on the Capitol.

Indeed, some of the fighting and attempted breaches at the Capitol did intensify about that time (for example, that’s shortly before, as some cops were trying to help Rosanne Boyland, who had been trampled, they were allegedly assaulted by James Lopatic, Jeffrey Sabol, Peter Stager, and Wade Whitten, with police officer BW being dragged down the steps prone and beaten).

But not the militias, at least not the Proud Boys.

According to the government’s detention memo for Donohoe, he subsequently — they don’t provide the time — sent out a message that the National Guard and DHS agents were incoming.

Donohoe’s intent to create mayhem and disrupt the proceedings at the Capitol continued well after the initial breach into the restricted grounds and up to the west terrace. Indeed, at 3:38 p.m., more than an hour after Pezzola and others had broken into the building, Donohoe indicated that he had left the Capitol grounds, but then announced over Telegram, “We are regrouping with a second force.” That plan appears to have been short-lived, as Donohoe subsequently advised the group that the National Guard and “DHS agents” were “incoming.”

This is fairly remarkable timing, as it came during the most inexplicable period of DOD’s delayed response with the National Guard. At 2:30, just before the second breach by militia-led groups, Acting Defense Secretary Christopher Miller met with (among others) Army Secretary Ryan McCarthy about requests for help from the city and the Capitol Police. At 3, Miller determines the Guard is needed at the Capitol and McCarthy orders them to prepare to move. At 3:04, Miller provides verbal approval for the Guard to support MPD. At 3:19 and 3:26, McCarthy was on the phone with first Chuck Schumer and Nancy Pelosi and then Bowser, assuring them the Guard was on the way. At 3:48, McCarthy leaves to go to MPD headquarters, taking 22 minutes to transit, even as two trained militia groups full of military veterans prepared to make a second assault on the Capitol. At 4:32, after calls back and forth among the militia, Miller provided verbal authorization for the Guard to help the Capitol Police.

But then, according to the guy DOD sent to the Senate to not answer questions like this, Robert Salesses, General William Walker, the guy in charge of the Guard, didn’t get that order for another 36 minutes.

Salesses: In fairness to General Walker too, that’s when the Secretary of Defense made the decision, at 4:32. As General Walker has pointed out, cause I’ve seen all the timelines, he was not told that til 5:08.

Roy Blunt: How is that possible, Mr. Salazar [sic], do you think that the decision, in the moment we were in, was made at 4:32 and the person that had to be told wasn’t told for more than a half an hour after the decision.

Somehow, it seems, the militias assaulting the Capitol had better lines of communication than the US Department of Defense.

2:30PM: Acting Secretary of Defense Christopher Miller and Army Secretary Ryan McCarthy meet to discuss the requests for assistance from the MPD and CPD.

3:26PM: McCarthy on the phone with Mayor Bowser.

4PM: Meeting with Stewart Rhodes on east side of Capitol.

4:32PM: Miller provides the verbal order for the Guard to reinforce the Capitol Police

5:08PM: General Walker gets the order to reinforce the Capitol Police