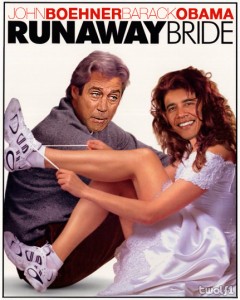 I was away during the dueling banjos press conferences of Barack Obama and John Boehner this afternoon. Apparently it was quite the show. Despite stating repeatedly how he was “left at the altar” by his Orange Glo golfing chum Boehner, President Obama seemed to get surprisingly effusive praise from pundits on the left for his speech.

Indicative of the praise is this tweet from Keith Olbermann:

You know my criticisms of this POTUS. In this news conference he has been absolutely effing kickass, and properly pissed off.

O was as passionate and as close to angry as he gets. #debtageddon

And Corn is now on Lawrence O’Donnell’s show on MSNBC, where Lawrence the “Eleventy Dimensional Chess Scold” himself just said of Obama’s presser:

“It was a brilliantly effective appearance for his reelection.”

And there is the problem isn’t it? Obama really was, and is, worried more about his reelection than he is the welfare of the country and the entirety of its citizens who are not members of his cherished moneyed elite and financial sector magnates.

The details seemed to ebb and flow over the last few days, but this from Bloomberg sums up the basics of what Obama was willing to pull the trigger on:

Two congressional officials said the White House told Democratic leaders it was pursuing a deal to cut spending, including on Social Security and Medicare, and a tax overhaul that could raise $1 trillion. That provoked an angry reaction yesterday from Senate Democrats, who said they feared they might be asked to swallow steep reductions in programs and trims to entitlement benefits with no assurance of higher tax revenue.

Right. What Obama was caterwauling about being “left at the altar” was his willingness, nee burning desire, to make huge cuts in spending and social safety net programs, in return for the possibility of a tax reform later.

And, make no mistake, Mr. Obama is absolutely desperate to make that deal in order to get the debt ceiling issue off the table until sometime after his reelection campaign. His “Grand Bargain” is shit for the economy, shit for almost all Americans safety net now and in the future; it is only good for the howling idiots in the Tea Party sphere and, of course, the reelection campaign of Barack Obama.

So THAT is what was “left at the altar”, and why Barack Obama was suddenly so apoplectically passionate about it. And, yes, it must be stated Boehner, Cantor and the Tea GOP are even more craven and lame than Obama here, but that is pretty weak tea to hang your hat on if you are a sentient being. And that, folks, was the way it was on the day the debt ceiling fell to the floor.

But, fear not trepidatious Americans, Mr. Obama is going to try to save your future and his “grand bargain” again tomorrow! Gee, what dedication.

UPDATE: Paul Krugman understands the ugly truth here, having issued an article today entitled “What Obama Was Willing To Give Away”. Exactly.