Something remarkable happened the other day when I was debunking (again) Ryan Grim for (again) misrepresenting the Siggi Thordarson story that I debunked long ago.

Ryan twice claimed the Federal Rules on Evidence are “gibberish.” 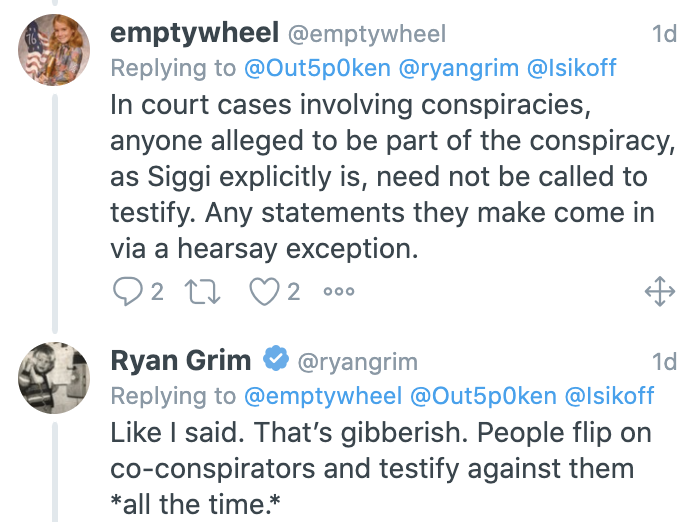 To be sure, these legal rules are gibberish, especially for those, like Ryan, whose beat has nothing to do with reporting on legal cases and so might not recognize the reference to the hearsay exception.

But Ryan also, obviously, not only didn’t recognize that I was making a factual observation about the way the indictment against Assange was charged and the rules under which evidence against him would be introduced at trial (if one ever happens), but responded based on an apparent assumption I was denying that co-conspirators flip on each other (Siggi did that ten years ago, not this year).

There’s an apparent belief that there would be a dramatic moment at trial where Siggi would take the stand as the single witness testifying that Assange did certain things with LulzSec and Assange’s lawyer Barry Pollock will get Siggi to explain that everything he told first the FBI and then prosecutors about Assange’s knowledge of his efforts to solicit hacks against US targets was a lie at the time, that in fact, Siggi really masterminded all of that and (more importantly for Assange) that Assange knew nothing about it and actively opposed it.

That scenario simply doesn’t understand the significance of the way DOJ charged the hacking, especially, as a conspiracy.

I’ve written about the significance of the parallel conspiracy charges in the Assange indictment before, but for the purposes of explaining the hearsay exception and other reasons it’ll be harder to discredit Siggi (who I agree is a liar) than people think, I’ll try again. Elizabeth de la Vega once provided a succinct eight-point description of how conspiracies get prosecuted that cuts through a lot of the legal gibberish.

The bold rule, seven, is actually rule 801(d)(2)(E) in the Rules of Evidence describing out of court statements by co-conspirators that aren’t treated as hearsay.

(2) An Opposing Party’s Statement. The statement is offered against an opposing party and:

(E) was made by the party’s coconspirator during and in furtherance of the conspiracy.

That means, most basically, that anything Siggi said, “in furtherance of the conspiracy … during the course of the conspiracy” (for example, to recruit others to steal documents that WikiLeaks could publish) can be introduced at any hypothetical Assange trial without Siggi having to take the stand. Several of the statements about which (Assange boosters claim) Siggi has retracted his testimony might well come in as evidence against Assange without Siggi ever having to show up. And the way DOJ has constructed this indictment makes it less likely that he would show up to retract his testimony.

There are five kinds of Siggi statements relevant to the hacking charge against Assange. First, the statements he made online, largely in the chatlogs he provided to the FBI, as a member of WikiLeaks before he left WikiLeaks and sold them out to the FBI on August 23, 2011. Those are what would come in under a hearsay exception.

Then there are statements Siggi made in that initial period as an FBI informant in 2011, and then separately, the statements he made under an immunity agreement before DOJ charged this indictment. As I understand it the terms of those discussions are different, as a confidential human source in the first case but as a co-conspirator testifying with immunity in the second. Assange would undoubtedly point to the terms under which he cooperated with US prosecutors to impeach Siggi’s credibility, using them to say he said what he did only to avoid legal liability himself. But the most useful stories to tell about those two interactions conflict (for example, to undermine Siggi’s motive for sharing chatlogs with the FBI, it serves to claim that Siggi was trying to dodge his own prior crimes in Iceland, but to undermine the second, WikiLeaks is now claiming, Siggi never committed those crimes in Iceland).

Importantly, however, what Siggi told the FBI in 2011 and DOJ in 2019 (as distinct from the legal terms under which he did so) will only be introduced as evidence if he does testify, and in that case, to force him to hew to his earlier stories.

I fail to see any evidentiary basis for Siggi’s more recent comments to Stundin to come in unless he testifies; they’re hearsay. To present evidence that Siggi told FBI and DOJ what they wanted to hear and then went to two Icelandic journalists who hadn’t read the indictment to brag about doing so, you’d have to call Siggi as a witness and get him to say that under oath.

This brings me to what I presume is a prosecutorial strategy; it appears that DOJ gave the opportunity (and went to great lengths in an attempt to coerce, in the case of Chelsea Manning and Jeremy Hammond) for all people described as co-conspirators in the indictment to testify, with immunity, before trial. I suspect they attempted to do so to lock in their testimony in advance of any trial, exposing the witness to perjury charges if the testimony changed (as Assange boosters claim Siggi’s has). I assume that, if prosecutors had a choice, zero of these co-conspirators would be called as witnesses at trial, but instead their co-conspirator statements would be introduced under the hearsay exception (though I expect that Manning would get subpoenaed to appear at any hypothetical trial, but possibly not called, by both sides given that she didn’t testify).

But if Siggi shows up (or anyone else who already provided presumably sworn testimony) as an Assange witness, he would be on the hook for the earlier statements he made to investigators that deviated from his new statements. That is, if Siggi testified contrary to what he already told FBI and DOJ, that would normally entail him being present in the US and therefore readily available for prosecution for a crime — perjury, at least — committed as an adult.

To be fair, Siggi’s arrest by Iceland improves Assange’s chance of calling Siggi as a witness. That’s because he would be otherwise unavailable to Assange (because he’s in prison), so Assange could ask to take a Rule 15 pre-trial deposition of Siggi in jail. While that would still allow prosecutors to demonstrate that Siggi’s hypothetically changed sworn testimony conflicts with his past sworn testimony, his current arrest and the need for extradition would lessen the legal risk for Siggi of reversing his past statements. Still, that that would require Assange wanting to focus even more attention on why he chose to associate with a serial fraudster and convincing a judge his statements were material.

There’s one more rule that bears notice to that explains why not a lot of co-conspirator witnesses are going to want to show up and testify to help Julian Assange, if their truthful testimony would help him. De la Vega’s rule six explains that, “once someone is found to have knowingly joined a conspiracy, he/she is responsible for all acts of other co-conspirators.” That means early co-conspirators who did not take steps to leave the conspiracy are on the hook for any of the later overt acts currently charged or the ones DOJ might charge. It would be child’s play to extend the parallel conspiracies — which currently extend through 2015 — through Assange’s 2016 publication of files GRU stole and through Joshua Schulte’s alleged hacking of the CIA, just the SysAdmin hacking the CIA that Assange used Edward Snowden’s example to solicit in 2013. Because Schulte declared an “Information War” on the US and attempted to leak more classified information from jail, the conspiracy could credibly be claimed to have extended through October 2018, meaning statutes of limitation might not toll until 2023.

The sustained hoax that that Stundin article shows Siggi retracting his testimony which (the claim goes) undermines the CFAA charge against Assange depends on several assumptions: first, that he actually did reverse his testimony (he did, but only on one small issue, and he also reaffirmed the most important claim he made about Assange), second, that there aren’t a slew of more credible witnesses (like Edward Snowden, and even more credible people the indictment doesn’t name) against Assange. But most importantly, the Assange boosters believe that this article — or some other kind of proof that Siggi retracted (a small but not the most damning part of) his testimony against Assange — will be introduced as evidence at the trial.

It’s hard to imagine how this article would. It’s hearsay. The reason claims made by pathological liars (or even more credible witnesses) to journalists can’t be introduced at trial via the article a journalist writes is because those claims can’t be tested in court. Unless Assange wants to argue that he and Siggi remained in a conspiracy when Siggi made the claims to Stundin, and the claims made to Stundin were part of that conspiracy, but that’s probably not going to help Assange.

I’m not celebrating that fact. I’m observing it. Julian Assange is in no way unique on this front.

But virtually none of the people claiming Siggi’s purported retraction helps Assange are even familiar with the content of the indictment, and fewer still seem to understand that Siggi is highly unlikely to be the dramatic witness at trial they want him to be. If those details appear to be “gibberish” to you, it’s probably a caution against accepting claims you want to be true without first understanding the legal rules behind the gibberish.