A dog’s breakfast, hodgepodge, pastiche, olio — this is a catch-all post with an open thread. I have a bunch of tidbits and loose ends with no place to go, not enough on which to center posts. Make of them what you will and bring your own potpourri in comments.

Loews — No, not Lowe’s as in the big box hardware store chain. Loews Regency, as in pricey hotel in NYC where Trump’s personal attorney and likely cut-out has been staying, ostensibly because of construction at his home. Yeah, the same home which was searched this past week along with this hotel room and office.

One detail folks may have forgotten: Loews Regency is the same hotel where Felix Sater arranged a 27-JAN-2017 meeting between Michael Cohen and Ukrainian lawmaker Andrey Artemenko to discuss a plan to lift the sanctions on Russia. Totally legal one week after the inauguration, right? But why meet with the president’s personal lawyer instead of State Department employees, or wait until Rex Tillerson was confirmed on February 1?

And when was the meeting set up — did Sater take a phone call from Artemenko before the inauguration?

It wasn’t clear back in early 2017 when exactly this back-channel was first established and it’s still not clear now.

Searching Cohen’s room at the Loews seems more reasonable considering the Artemenko meeting. Has Cohen had a room or rooms in Loews Regency since inauguration day or earlier?

Hacka cracka lacka — Hey, remember how former CIA director John Brennan was hacked in 2015 and 2016 by a couple of “Cracka” hackers? Two dudes from North Carolina were arrested and prosecuted, sent to prison for two years for hacking senior U.S. officials.

One detail sticking in my craw has been the third party characterized as a group leader; only a teenager at the time, they were located in the U.K.

Why have so many issues related to politics and information security had links to the U.K. — like Cambridge Analytica/SCL and Brexit? Did somebody manipulate an autistic U.K. teenager into work assisting larger aims?

Facebook’s Chancellor — Prof. David Carroll asked a very good question: why didn’t any member of Congress on either the Senate Judiciary Committee or the House Energy & Commerce Committee ask about Facebook employee Joseph Chancellor, a psychologist who had been hired away from Cambridge Analytica. Well?

Speaking of Facebook, there are several folks who’ve been all over the this scandal, some of whom have been responsible for the public’s awareness that Facebook data had been acquired without users’ consent. Give them a follow:

Carole Cadwalladr — reporter-writer for Guardian-UK and Observer who has doggedly covered Cambridge Analytica/SCL links to Facebook user data and their impact on the Brexit referendum in June 2016. Her Guardian content here (consider throwing them a few bucks for her great work.)

Chris Wylie — Cambridge Analytica’s former director of research now whistleblower who revealed much of the workings between CA/SCL and Facebook’s ill-gotten data.

David Carroll — Associate professor of media design at the School of Art, Media, and Technology at The New School’s Parsons School of Design; he’s been chasing his personal data located in the U.K and is now suing Cambridge Analytica’s parent, SCL, for U.S. data it obtained without consent. (Read about the case and chip into the legal fund at this link.)

Also note that Verge senior writer Sarah Jeong generously tweeted all the members of Congress who’d received donations from Facebook as they questioned CEO Mark Zuckerberg. Check it out.

Content bias — During this week’s committee hearings with Facebook CEO, GOP members of Congress tried repeatedly to make a case that Facebook was biased against conservative content. Too bad Facebook helped get a GOP POTUS elected, shooting that narrative in the ass.

But one related thing has stuck in my craw for quite some time, and I can’t help wonder if it was yet another way in which Facebook was manipulated by a disinformation operation.

Remember back in 2016 stories reporting Facebook’s contract content editors complained that Facebook was biased against conservatives? The story first appeared in Gizmodo on May 9, then got picked up by other outlets. A political story during the campaign season usually happens the other way around — covered first in a big national outlet then picked up in lesser outlets. Why did this story happen via Gizmodo first? This would be the perfect manner in which to launder information; the point of origin is obscured by the second and third outlets to pick it up as they typically go to the biggest source to confirm their story. In this case, an outlet like NYT or WaPo would go to Facebook and put them on the spot. They wouldn’t bug Gizmodo or the leakers who went to Gizmodo.

Another important factor: Gizmodo was part of beleaguered Gawker Media, which was about to implode and bought out months later by Univision. Anybody remaining at the time this story hit was uncertain about the security of their job. Journalists would have been ripe for manipulation because they needed an attention-getting story to improve their odds for a next gig.

In fact, Gawker Media filed for Chapter 11 bankruptcy one month after the Facebook bias story was published — on June 10, 2016. Think of this 30-day time frame as two very stressful paydays for beleaguered Gawker employees who were trying hard to keep on keeping on but probably frantically wallpapering prospective media employers with resumes.

One more important factor: the reporter who covered this story was a technology editor whose beat wasn’t politics or free speech issues. This changed the way the story was covered and rolled out; if a reporter with more savvy and experience covering politics had been approached with this particular tip, they might have known there was something more to this than poor-conservatives-being-suppressed-by-liberal-bias. A political contributor might have questioned the insistance that outlets like Breitbart and Newsmax weren’t being included alongside NYT and WaPo.

Watching GOP congresspersons repeatedly bash Zuckerberg about media bias, I could see the same deer-in-the-headlights reaction Facebook had back in 2016 when these contract editors complained about bias. There was no bias; the hearings this week and the story in 2016 were naked attempts to screw with Facebook’s algorithms so that POS outlets like Mercer-funded, Bannon-operated Breitbart and Alex Jones’ InfoWars could get the same attention as legitimate outlets like NYT and WaPo.

We’re still going to have to press Facebook and other social media outlets to address this problem. It’s just not a problem of bias but identifying legitimate reported journalism. And we all have a problem with being easily played for our lack of sufficient skepticism.

Go for it. What detritus have you been carrying around that doesn’t fit anywhere else? Share in comments. 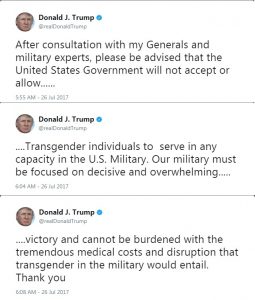