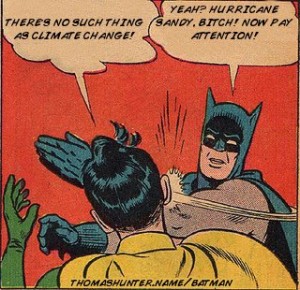 Corporate interests with strong ties to conservative politics have undermined American’s awareness and understanding about climate change. Record profits from fossil fuel businesses have been threatened by talk of reducing consumption. Rather than change their business model, these entities went on the offensive against knowledge; facts were stretched until barely recognizable, bolstered with easy untruths, and fed to the public alongside infotainment through co-opted media.

Presto: Americans are the least likely to believe in anthropomorphic climate change, and they’re likely to vote for candidates who mirror their own tractability.

But the truth has a nasty way of bitchslapping consumers and voters until their attention is returned to the facts. Hurricane Sandy, following this past summer’s wretched Dust Bowl-like drought, delivered a one-two punch to the public’s consciousness. Americans are ripe right-the-hell NOW for corrective action in the form of education and effective policy.

Therein lies the problem: there is no ongoing nationwide sustained discussion on climate change reaching a critical mass of the American public, and they in turn are not demanding better, effective, and immediate policy. There’s lots of hand-wringing over the damages caused by the drought and hurricane. There’s discussion about improvements to emergency response (tactical), and chatter about building dikes a la Netherlands to protect New York City from future hurricanes (tactical).

Yet there’s only tactical discussion–no society-wide dialog about strategic approaches to climate change.

The challenge to the educated and aware is to change this scenario and fast. The longer it takes for the tractable to become engaged and aware, the more time fossil fuel interests have to re-poison the minds of the public before the next truth-borne bitchslapping. END_OF_DOCUMENT_TOKEN_TO_BE_REPLACED