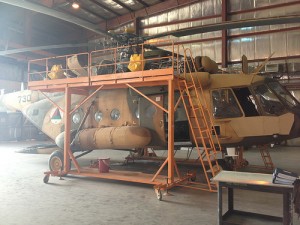 An Mi-17 undergoing maintenance. Most maintenance within SMW is carried out by contractors because SMW lacks the expertise. (SIGAR photo).

The Special Inspector General for Afghanistan Reconstruction, (SIGAR) issued a report (pdf) yesterday that serves as microcosm of the bumbling ineptitude and denial of reality that has characterized the entire US military’s misadventure in Afghanistan. Subtexts running through this scandal run the gamut from US think tanks cooking up unworkable plans to the vast network of international arms dealing (replete with counterfeit parts), Russia supplying arms to Syria, possible blow-back from the arrest of Viktor Bout, the US Congress remarkably trying to exert a bit of power and finally DoD declaring that they will continue with their schedule for claiming Afghanistan can provide its own defense operations despite overwhelming evidence to the contrary.

At issue here primarily is a contract for 30 Russian Mi-17 helicopters. Despite the fact that the US has been at war in Afghanistan continuously for almost twelve years now, and despite the spectacular failure of US helicopters under haboob (dust storm) conditions in the failed April, 1980 Iran hostage rescue attempt, it appears that Russian helicopters are more reliable in desert conditions and easier to maintain in flying order with a less sophisticated ground crew than US helicopters

The route by which we got to this contract is remarkable. The helicopters are to be supplied to the Special Mission Wing, which is the air support group for Afghanistan’s Special Operations forces. But how this group came into existence is very important to the current scandal. From the report (footnotes removed in this and all subsequent quotes):

At a December 2011 Special Operations Summit, ISAF senior leadership identified the development of air support capacity as a priority for improving Afghan military capabilities for counterterrorism and other special operations missions. To respond to this need, NTM-A [NATO Training Mission – Afghanistan] sponsored a RAND study to assess requirements and provide recommendations. The study’s recommendations discussed different scenarios for the planned size—in terms of both personnel and aircraft—of air support, the command structure, and scope of operations.

NTM-A determined that the Afghan Ministry of Interior’s (MOI) existing Air Interdiction Unit, a counternarcotics-focused unit, would provide the best foundation to develop an Afghan counterterrorism and special operations aviation capability, while maintaining critical counternarcotics efforts. On May 12, 2012, NTM-A issued a military order identifying its concept for the establishment of the SMW. On July 18, 2012, the ANA commissioned the SMW, which replaced the Air Interdiction Unit.

That’s all fine and dandy, except that the geniuses at RAND didn’t allow for the fact that they created a destructive turf war inside the Afghan government. The new SMW is to be housed within Afghanistan’s Ministry of Defense (MOD) since that is where Afghan Special Operations resides. The turf war over moving the existing unit has not yet been resolved: END_OF_DOCUMENT_TOKEN_TO_BE_REPLACED