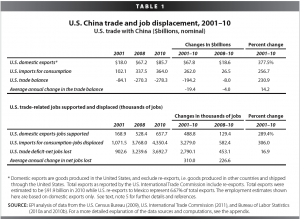 Some of the more amazing stories about China’s domination of manufacturing these days pertain to the cities in China that make most of just one of the world’s consumer goods, like socks.

But a new study from the Economic Policy Institute makes it clear we haven’t just lost textile jobs to China, we’ve lost high tech manufacturing jobs too. The study finds, for example, that since China joined the WTO, the outsourcing of tech manufacturing to China has been the biggest driver of our trade deficit with China.

As a result, those parts of the country where such tech jobs had been concentrated have been inordinately affected.

The trade deficit in the computer and electronic parts industry grew the most, displacing 909,400 jobs—32.6% of all jobs displaced between 2001 and 2010. As a result, the hardest-hit congressional districts were in California, Texas, Oregon, and Massachusetts, where remaining jobs in those industries are concentrated.

Now, to a great degree, we already knew this. IBM sold its PC division to China in 2004. And whereas stories of abusive conditions for those who make branded goods used to focus on sneakers, they now focus on Apple’s products.

But it also ought to be a wake-up call. It took some time for the upheaval caused by NAFTA to thoroughly devastate the Rust Belt and parts of the south. And while CA may be large and diverse enough to recover from the loss of these jobs, in other places (surprisingly, perhaps, NH, which lost the highest percentage of its jobs to China), they’re not.

Plus, there’s the whole problem of lost capabilities. As this manufacturing goes to China, we lose the symbiotic effect of having people manufacture–say–iPhones down the road from the folks designing the new ones. Thus, while in the short term it may be easy for Steve Jobs to churn out new products sending this stuff to China, in the post-Steve Jobs era, particularly with this lost symbiosis, it may be harder to continue to innovate.

But don’t worry. I’m sure working class Californians will be just as happy in their service jobs as Michiganders are. Which is to say, not that much.