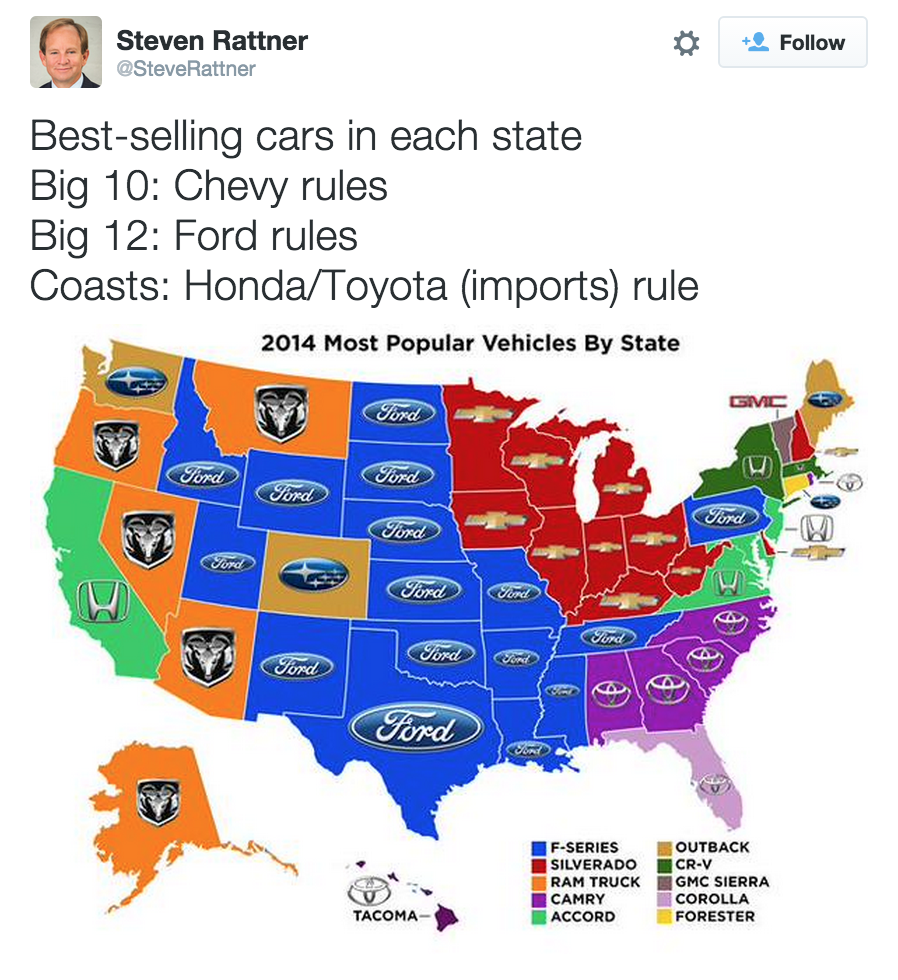 I really shouldn’t waste my time making fun of Steve Rattner, but I will.

He just tweeted a map showing the most popular vehicle in each state last year. He noted that in the Big 12 Ford rules, the Big 10 Chevy rules. If you ignore current conference memberships such a claim might be mostly true.

Then he said that on the coasts, “Honda/Toyota (imports) rule.”

Only, for the two main vehicles he was discussing, Camry and Accord (and to a lesser degree, CR-V), those vehicles aren’t imports. They’re made in the US.

In fact, if you account for the source of the parts in a vehicle, Camry has been — for several years — the most “American” car.

Indeed, of the cars he was discussing, only the Forester is primarily assembled in Japan — other “imports” are made in North America (Subaru keeps talking about bringing that production to IN, too, but it seems more likely they’ll just keep increasing Outback production there).

Maybe Rattner was just being sloppy, using the word “import” for the term “transplant” used within the industry. Though the comment seemed to be central his point — he added the word “import” to explain why this was interesting, it seemed.

Unless he was making a distinction about unionization — the transplants remain non-union, though UAW is working hard to change that — his comment was an odd betrayal of how unfamiliar he is with cars, even after serving as Obama’s Car Czar.

When I hosted Steve Rattner at FDL Book Salon, I noted how blind he was to problems of other private equity firms–in the context of the auto bailout, Cerberus. So I was interested in Rattner’s attempt to defend Mitt’s tenure at Bain.

Bain Capital is not now, nor has it ever been, some kind of Gordon Gekko-like, fire-breathing corporate raider that slashed and burned companies, immolating jobs wherever they appear in its path.

Instead, with modest exceptions (keep reading to learn more about these), Bain Capital was a thoroughly respectable — nay, eminent — investment manager that successfully discharged its responsibility of earning high returns for its investors by deploying capital in companies privately rather than by buying shares in the public market. (Hence the name, private equity.)

The point Rattner of course doesn’t delve into is this one: how taxpayers effectively subsidize this process because of tax law.

So what are the question marks (promised above) around the story of Romney and Bain Capital? First, it’s fair game to question the amounts of debt that are sometimes used in leveraged buyouts. While higher debt usually means higher returns — because debt is cheaper than equity, thanks in part to its tax deductibility — it also means higher risk of bankruptcy.

The problem, as private equity guy and public monies-scamming Steve Rattner sees it, is all this debt leads to more bankruptcies.

But what does it mean that all this debt incurs tax advantages?

Thankfully, Rortybomb posted this interview with Josh Kosman, who wrote a book on the topic, to explain it.

Your research has found that, far from being natural, private equity exists largely due to issues with the tax code. Can you explain?

The whole industry started in the mid-to-late 1970s. The original leveraged buyout firms saw that there were no laws against companies taking out loans to finance their own sales, like a mortgage. So when a private equity firms buys a company and puts 20 percent down, and the company puts down 80 percent, the company is responsible for repaying that.

Now the tax angle is that the company can take the interest it pays on its loans off of taxes. That reduces the tax rate of companies after they are acquired in LBOs by about half. Banks, also realizing this tax effect, were willing to finance these deals. At the time, you could also depreciate the assets of the company you were buying — that’s not true today.

They saw that you could buy a company through a leveraged buyout and radically reduce its tax rate. The company then could use those savings to pay off the increase in its debt loads. For every dollar that the company paid off in debt, your equity value rises by that same dollar, as long as the value of the company remains the same.

So the business model is based on a capital structure and tax arbitrage?

Yes. It’s a transfer of wealth as well. It’s taking the wealth of the company and transferring it to the private equity firm, as long as it can pay down its debt.

A recent paper from the University of Chicago looking at private equity found that “a reasonable estimate of the value of lower taxes due to increased leverage for the 1980s might be 10 to 20 percent of ﬁrm value,” which is value that comes from taxpayers to private equity as a result of the tax code. Can you talk more about this?

That sounds about right. If you took away this deduction, you’d still have takeovers, but you’d have a lot less leverage and the buyer would be forced to really improve the company in order to make profits. I think that would be a great thing.

The whole interview very accessibly lays out precisely what I was trying to get at the other day: there are aspects of private equity that have bad consequences baked in. And they’re all baked in, in part, precisely because taxpayers are subsidizing the takeovers in the form of tax benefits.

Or welfare, as the creative destructionists ought to call it.

Update: Per prostratedragon, see this Dean Baker diary putting some numbers to this rich person welfare.