This Parisian artist is fascinating. Indila is extremely popular in France, mostly because of ballads like this one with multi-generational appeal. Many of her works contain lyrics in more than one language which increases the breadth of her allure. This particular song is indie/dream pop, but she also works in rap and fusion raï — the latter a form of Algerian folk music.

It’s no surprise that some of Indila’s work fuses raï with other genres. She’s of Algerian descent, though she’s said she’s also Indian, Cambodian, Egyptian and Moroccan. Indian influences her work with band TLF in Criminel, African cultures shape her collaboration with Youssoupha in Dreamin’ (the video is set in Arizona, oddly enough), and Middle East in Poussière d’empire with artist Nessbeal.

Do surf YouTube for more of her solo work when you’re in the mood for something sweet and angst-y.

Dick moves
These are among some of the stupidest, rudest, dickiest things in my timeline today. Perps deserve a whack along side the head. Don’t like my language? Tough rocks.

Long-listen
If you have the stomach for it, listen to this Bloomberg podcast in which Laurence Ball, Department of Economics Chair at Johns Hopkins, says the U.S. could have avoided the 2008 crash by rescuing Lehman Brothers. Hindsight is 20/20 — in this case, it’s nauseating, too. Fecking Bush administration…

Racier than the usual video here, but I’m trying — hence this selection. I’m fried after a late night, can’t muster much mental wattage this morning. Only one cohesive theme emerged by itself from my news feeds, though I kept trying for a second one.

Yuck. I could just barf after that last one. We are jacking our kids into this monster without pause. That’s enough for today.

This Latin jazz song was on the very first album I owned — Santana’s Abraxas. I have no idea what possessed my father to select this way back in 1971 because he’s not musically inclined. I prefer to think he was persuaded by the music store staff to buy it for me rather than think the cover art did it for him. To this day I don’t dare ask; I’d rather live with my illusion.

Perhaps he simply liked Oye Como Va by Tito Puente and decided I needed it. Maybe that’s what he wanted to listen to when I played the album over and over again, ad nauseam. The song is still easy to listen to even when played by a septuagenarian, isn’t it? Though Puente probably still felt the same way about this song in his last live performance as he did when he first recorded it in 1963.

The personal irony I’m certain my father never considered: the last line is a reference to a mixed race “mulatto” woman. That’s me.

Looks like it’s going to be a lovely late spring weekend here — hope you’re going to have a nice one, too. See you Monday! 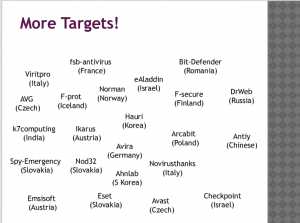