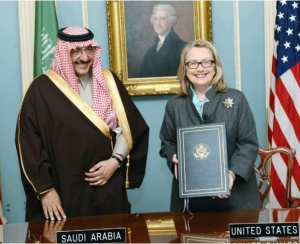 From everything I know, Saudi Prince and former Intelligence Chief Turki al-Faisal is incredibly shrewd. And I believe Saudi Arabia has already started to make the kind of strategic realignments he threatens in his op-ed threatening consequences if the US vetoes Palestinian’s bid for statedhood at the UN Security Council.

The United States must support the Palestinian bid for statehood at the United Nations this month or risk losing the little credibility it has in the Arab world. If it does not, American influence will decline further, Israeli security will be undermined and Iran will be empowered, increasing the chances of another war in the region.

Moreover, Saudi Arabia would no longer be able to cooperate with America in the same way it historically has. With most of the Arab world in upheaval, the “special relationship” between Saudi Arabia and the United States would increasingly be seen as toxic by the vast majority of Arabs and Muslims, who demand justice for the Palestinian people.

Saudi leaders would be forced by domestic and regional pressures to adopt a far more independent and assertive foreign policy. Like our recent military support for Bahrain’s monarchy, which America opposed, Saudi Arabia would pursue other policies at odds with those of the United States, including opposing the government of Prime Minister Nuri al-Maliki in Iraq and refusing to open an embassy there despite American pressure to do so. The Saudi government might part ways with Washington in Afghanistan and Yemen as well.

The reason why this threat wouldn’t work even if supporting Israel unquestioningly weren’t already a third rail of our politics has to do with NY-9, Anthony Weiner’s congressional seat.By all appearances, Democrats are going to suffer an embarrassing loss there tomorrow. And while pollsters offer mixed messages about its true impact on the race, the Republican, Bob Turner, has made real efforts to suggest Obama is anti-Israel.

One surprise in Siena’s polling, however, is the relative importance of Israel to the race. Turner has made it an absolutely critical issue for his campaign, slamming Obama’s stance on the Israeli-Palestinian conflict at every turn in an effort to win over Jewish voters in the district. Weprin, an Orthodox Jew, has a similar position on Israel but Turner has argued that unless he breaks with Obama entirely and refuses to endorse him, he’s still tainted.

But according to the numbers, it may be less of a factor than it seems.

“I don’t see it at all,” Greenberg said, when asked about the “Israel effect.”

Siena asked voters to pick from five options to explain their vote, including the candidate’s party, position on Social Security and Medicare, whether they were endorsed by a trusted source, their position on economic issues, and finally their position on Israel. Only 7% of voters picked Israel, including just 16% of Jewish voters.

That may not be the whole story, however: Weprin’s lead with Jewish voters has collapsed from 21 to 6 in the last month. It’s roughly in line with the total 12% drop among voters overall, but may be more complicated to tease out. Jensen, for his part, doesn’t want to make any conclusions on the Israel issue without seeing more detailed results first.

Between our sure veto of Palestine’s efforts at the UNSC and the increasingly dangerous squabble between Turkey and Israel, not to mention increasing tensions between Egypt and Israel, Obama ought to attempt a grand bargain to foster peace in the Middle East.

But it’s not going to happen.