Tag Archive for: US death squads 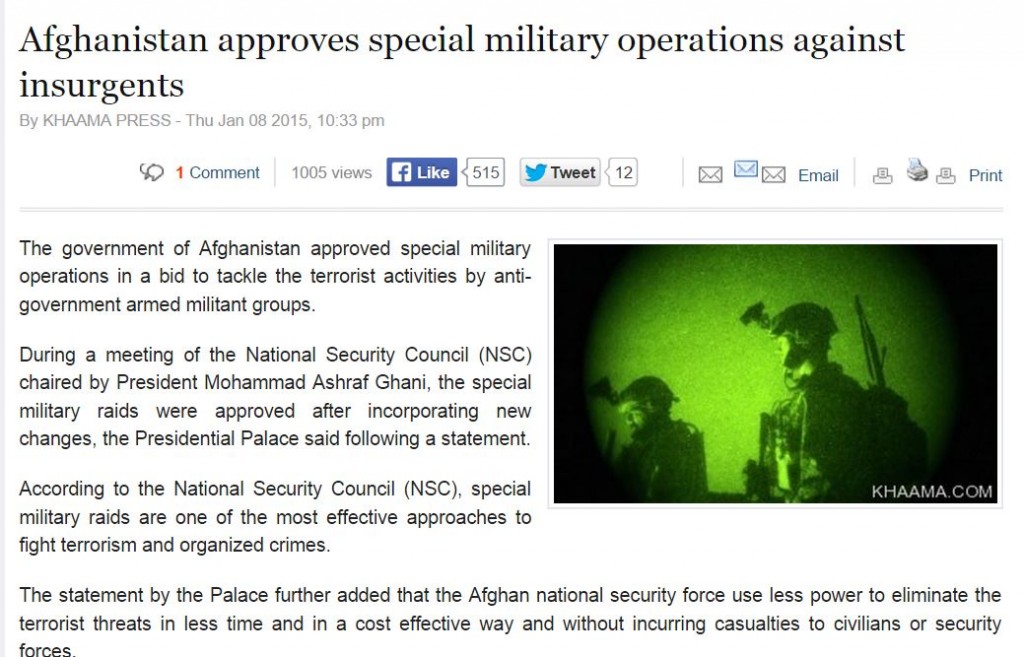 Greg Miller reports in the Washington Post that the CIA will be closing several bases in Afghanistan as US military forces are withdrawn from the country. I’ve been obsessing lately about US death squads operated primarily by the CIA but also affiliated with Special Operations forces and their bases. These death squads have been an integral part of the vaunted David Petraeus COIN strategy in both Iraq and Afghanistan (and rest on the heritage of death squads funded by the US in Latin America and those run by the US in Vietnam).

Miller’s article joins a growing trend toward public acknowledgement of the paramilitary activities the CIA has carried out in Afghanistan:

The CIA has begun closing clandestine bases in Afghanistan, marking the start of a drawdown from a region that transformed the agency from an intelligence service struggling to emerge from the Cold War to a counter­terrorism force with its own prisons, paramilitary teams and armed Predator drones.

This year, President Obama approved new counterterrorism guidelines that call for the military to take on a larger role in targeted killing operations, reducing the involvement of the CIA.

But the guidelines included carve-outs that gave the agency wide latitude to continue armed Predator flights across the border and did not ban a controversial practice known as “signature strikes,” in which the agency can launch missiles at targets based on patterns of suspicious behavior without knowing the identities of those who would be killed.

John Brennan will hang on to his “latitude” to continue signature strikes. It seems likely that he also will keep his death squads active in Afghanistan, but they will be operating out of fewer bases. International laws and treaties are just immaterial if you have enough moral rectitude.

Oh, and as a postscript, the article does confirm affiliation of  CIA paramilitary forces with military bases (just as has been at the center of the controversy surrounding the Nerkh base in Maidan Wardak Province, where Karzai expelled US Special Forces):

Even so, a full withdrawal of U.S. troops would probably trigger a deeper retrenchment by the CIA, which has relied on U.S. and allied military installations across the country to serve as bases for agency operatives and cover for their spying operations.

It appears that Brennan and the Obama administration just don’t care any more about maintaining secrecy on their war crimes. After all, who is going to stop them?

The continuing saga of Zakaria Kandahari, who has been at the heart of the torture and murder cases that prompted Hamid Karzai to ban US Special Forces troops from the Nerkh District of Maidan Wardak Province took another huge twist Sunday, as Afghanistan confirmed that they have Kandahari in custody. An important point to keep in mind while reading the accounts of Kandahari and the US personnel he worked with is that a strong case can be made that Kandahari most likely was affiliated with the CIA, either directly as an agent or as a contractor. US denials of Kandahari working for Special Forces then become a ruse, since even if Special Forces were present with him, they likely would have been tasked to CIA for those particular missions, providing deniability for the entire group with respect to the missions being carried out by US Special Forces, ISAF or NATO.

From the New York Times story on Kandahari’s arrest:

Afghan officials confirmed Sunday that they had arrested and were questioning Zakaria Kandahari, whom they have described as an Afghan-American interpreter responsible for torturing and killing civilians while working for an American Special Forces unit.

The arrest of Mr. Kandahari, who had been sought on charges of murder, torture and abuse of prisoners, was confirmed by Maj. Gen. Manan Farahi, the head of intelligence for the Afghan Defense Ministry. He said Mr. Kandahari, who escaped from an American base in January after President Hamid Karzai demanded his arrest, had been captured in Kandahar by the National Directorate of Security, the Afghan intelligence service. There had been speculation for the last three weeks that Mr. Kandahari was in custody.

The Times leaves out a few important details when they mention Karzai’s demand last January that Kandahari be arrested. Back in mid-May, they claimed it was the head of Afghanistan’s military who demanded the arrest and provided details on John Allen making false promises that he would be turned over:

Note that the Times said that there had been “speculation for the last three weeks” of Kandahari’s arrest. The article on the arrest in the Washington Post states that he was arrested about six weeks ago: END_OF_DOCUMENT_TOKEN_TO_BE_REPLACED