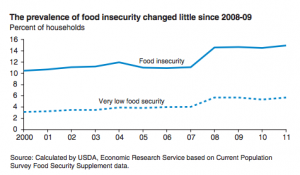 Here’s what the Secretary of Agriculture–who is in charge of our nation’s Food Stamp program–had to say about food and hunger at his DNC speech last night:

You know, rural Americans are a special people. Their labor puts food on our table and fuel in our gas tanks.

Today, President Obama is making smart investments in clean energy—wind, solar, biofuels —as part of an all-of-the-above energy strategy that supports thousands of jobs, not in the Middle East, but in the Midwest. And in this season of severe drought, President Obama has acted to help, while calling on Congress to act as well.

For Tom Vilsack, corn is what you pour into a car, not what you put into hungry bellies, not even during a year of record drought.

And here’s what the Chair of the Senate Agriculture Committee, who is up for re-election and who is fighting with Paul Ryan’s obstructionist House Republicans over whether the Farm Bill will cut food stamps, had to say about food and hunger while she stood on the DNC stage last night:

(In other, um, words, Obama gave Debbie Stabenow no speaking role.) Even Elizabeth Warren, who gave a great speech focused on how rigged the game is against struggling families, didn’t talk about hunger. Bill Clinton got huge cheers, though, when he made clear that Obama wants to require the poor to work more for welfare, not less.

And yet this week Vilsack’s Ag Department just released the annual report on Food Insecurity showing that more action is needed. (h/t Jeff Bryant) Among other things, the report showed that the number of US households that experienced very low food security last year–6.8 million households or 5.7% of the population–went up last year to the elevated levels of 2008 and 2009. And while parents and policies usually shield children from hunger, in 374,000 homes, they weren’t able to (which remains at the level of 2010). Altogether, 17.9 million people were food insecure at some point last year.

I learned yesterday that if I were one of these 17.9 million people I’d be sunk. Rather than watch the early speeches last night (conincidentally, I came home just in time to see Vilsack), I attended a local poverty simulation as part of Hunger Action Week. We broke up into “families” and tried to get through a month making ends meet without enough money to do so; I was the single mother of 3 kids, aged 9 to 17, whose ex-husband had recently lost his job and stopped paying child support.

I found I immediately went into panic mode just figuring out how to pay for transportation to start negotiating the system (it was one thing that added up but wasn’t an obvious budget item). END_OF_DOCUMENT_TOKEN_TO_BE_REPLACED 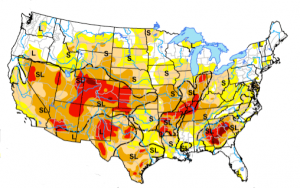 END_OF_DOCUMENT_TOKEN_TO_BE_REPLACED

When The Decline and Fall of the American Empire is written, I hope the historian writing it is astute enough to notice that the same week our nation’s highest court spent deciding whether the government could legally offer (badly conceived) health insurance reform, the business community was fighting to sustain a market for pink slime.

Pink slime arose as a typically American response to industrialization. After Jack in the Box killed a bunch of its customers by feeding them E. coli, rather than cleaning up the nation’s industrial meat supply, the food industry instead decided to scrub meat parts with ammonia before mixing it back in with The Beef.

But guess what? If you tell consumers what kind of slime you’re actually feeding them, they’ll stop eating it.

Ammoniated beef has taken a real beating in the media over the past couple years, and now fast-food giants McDonald’s, Taco Bell and Burger King are no longer using it. As veteran journalist Philip Brasher reported over the holidays, the Iowa-based company that manufactures the beef product — at one time used in around 70 percent of American ground beef — has watched sales drop by 25 percent.

Beef Products Inc. uses an innovative process to turn fatty beef trimmings, which used to go mainly into pet food and other byproducts, into hamburger filler. Because the trimmings are at risk for E. coli or Salmonella contamination, the company adds a mixture of ammonia and water (ammonium hydroxide) to kill bacteria. BPI’s process, progressive food safety policies, and state-of-the art system have received numerous food safety awards and the company has never been linked to a foodborne illness.

But when some consumers find out about the treated beef product — dubbed “pink slime” by a U.S. Department of Agriculture microbiologist — they don’t like what they hear and food companies are taking notice.

In 2008, many American eaters were introduced to the product by Food, Inc, the Oscar-nominated documentary, which portrayed the technology as merely masking a symptom of a bigger problem: the industrial meat system. A year later, a New York Times expose questioned whether the ammonium hydroxide process was really delivering on its food safety promise, which is especially critical considering the product is widely used in the National School Lunch Program.

After Krogers and McDonalds both decided they couldn’t continue to sell consumers pink slime anymore, the pink slime company, BPI, shut down a bunch of pink slime factories.

Now a bunch of Governors and other industry-owned hacks have taken to the airwaves to defend pink slime.

Three governors, among them recent presidential candidate Rick Perry of Texas, two lieutenant governors, and the Under Secretary for Food Safety at the U.S. Department of Agriculture all went to bat for Beef Products Inc. in a press conference in South Sioux City, Nebraska Thursday to assure consumers that Lean Finely Textured Beef, now widely known as “pink slime,” is safe and nutritious.

END_OF_DOCUMENT_TOKEN_TO_BE_REPLACED

Marion Nestle describes that the USDA is cutting back on basic research.

This decision, Neuman reports, “reflects a cold-blooded assessment of the economic usefulness”—translation: lack of political clout in the affected industry—of the 500 or so reports issued by the National Agriculture Statistics Service each year.

I was struck, in particular, by this report on the cutting block.

Which I believe is this report:

This file contains the annual report of the number of colonies producing honey, yield per colony, honey production, average price, price by color class and value; honey stocks by state and U.S.

Why, at a time when people are struggling to understand colony collapse, would the government eliminate a report on how many colonies are producing honey? This is like eliminating a report on how many canaries die in coal mines just to make sure people don’t become worried about imminent explosions.