Looks like Russia decided to move its planned naval war games away from Ireland’s fisheries. Bonus: CNN’s Donie O’Sullivan got to make a trip home to interview Irish fishermen.

Some happy fishermen — we are live tonight from Castletownbere where the fishermen who were prepared to stand up to the Russian navy are celebrating. pic.twitter.com/Ay9dEiZZF8

(Is it me or did Donie’s accent regain a bit of its strength?)

There are three points about the Irish fishery versus Russian navy story which have struck me as odd and worth more examination:

Watch CNN’s videos at the Twitter thread shared above. Doesn’t it strike you as unusual that a Russian diplomat would work directly with an Irish fishing industry representative Patrick Murphy, CEO of the Irish South & West Fish Producers Organisation, rather than the diplomatic arm of the Irish government as well as the UK since Irish and UK waters abut each other?

Granted, most U.S. newspapers painted this as Russia being discouraged but what does this scenario look like to the Irish?

Is it possible Donie himself missed a potential influence operation at work?

This clip from an Irish news media outlet doesn’t pointedly say that Russia bypassed Ireland and the European Union, or that the Irish and the European Union ignored Russian diplomats, but the wording suggests Irish diplomatic service and EU’s diplomats may not have been involved directly in the negotiations with Russia’s foreign ministry and navy (at 0:29 in the video).

@RayKennedyNews reports on the Russian naval exercise that has now changed course, speaking to @McNamara_Eoin on what it means for the Irish defence forces going forward.

The Minister for Foreign Affairs Simon Coveney tweeted last night that he had written this past week to Russia about the naval war games’ planned location:

This week I wrote to my counterpart, the Minister of Defence of Russia, to request a reconsideration of naval exercises off the Irish coast. This evening I received a letter confirming the Russian exercises will be relocated outside of Ireland’s EEZ. I welcome this response.

But the timing of Russia’s response to the Minister for Foreign Affairs seems secondary to the meeting between the Irish fishery industry’s representative and Russia’s diplomat.

The 150-mile reference used in most reporting as the range of Irish fisheries from the Irish coast doesn’t make sense, the first reason being the use of an imperial measurement rather than metric like kilometers and the second being the location of the Irish fisheries. 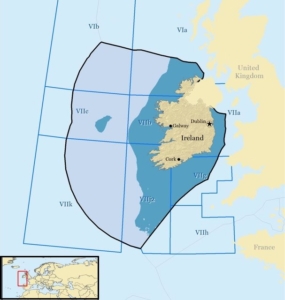 The area of concern is much wider than 150 miles from the coast; as you can see for comparison from this Google Map below, the linear distance between Dublin and Plymouth UK is a little less than 220 miles. 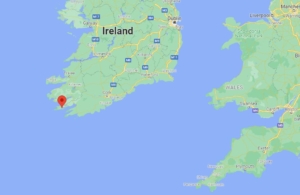 The Irish fisheries are at least as wide as that distance from the west coast of Ireland.

Both Ireland and Russia are parties to the United Nations Convention on the Law of the Sea (UNCLOS) which spells out the Exclusive Economic Zone (EEZ) for each country. The Irish fisheries are part of that EEZ denoted in the outlined area in the first map above.

Russian vessels would have to make a very large swing around UK waters to get close to the southern Irish fishery while avoiding Ireland’s EEZ.

No matter what the buzz about Russia’s navy moving further away from the Irish coast, there’s no way Russian vessels can maneuver around Ireland and the United Kingdom without crossing submarine communications cables. 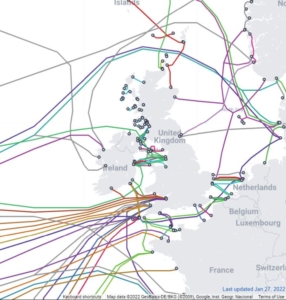 As you can see, a majority of the submarine cables south of Ireland run to North America, and most of them to the U.S.

The suggestion that the Russian Navy might cut communications cables – accidentally or not — while in waters south of Ireland during a military exercise was an implied threat to the U.S. and the Big Tech companies which have data farms in Ireland. Facebook, Google, and Microsoft have facilities in and around Dublin; Apple has been working on a planned data farm near Galway though construction hasn’t started.

The threat also targets NATO since Ireland is dual represented by itself and EU member nations as parties to the UNCLOS. Under Article 5 of the North Atlantic Treaty, an attack on a member nation is an attack on NATO.

Where it gets messy: Ireland is not a member of NATO though Northern Ireland is as part of the United Kingdom.

Is this why the Russian diplomatic service talked directly with Irish fishermen, to avoid getting NATO into the mix?

Was it part of a Russian influence operation to be perceived as open to non-NATO countries?

Speaking of Irish fisheries, I found a recipe for Seafood Chowder from the Renvyle House Hotel in Connemara, County Galway I want to try as I have scallops, salmon, and some lake trout in the freezer which I need to use.

It’s a lot like the Finnish stew kalamojakka my mom makes. Well, right up to the brandy.

From the nature of the political feeding frenzy surrounding the ongoing P5+1 negotiations with Iran on Iran’s nuclear technology, it is hard to believe that the Joint Plan of Action under which the countries are now operating was extended last November through the end of June of this year. At the time of that extension, the US announced a goal of having the political framework of the final agreement worked out by March 1. That date has now slipped to March 31, but current negotiations are still aimed at getting the political framework in place before the final details get ironed out. But with Benjamin Netanyahu making a speech to a Joint Session of Congress next week and other assorted madness, one would think that we are in the last few hours of the negotiating window.

Of course, one of the groups most upset by the possible outcome of removing the US sanctions against Iran is the MEK. Their latest tantrum, yesterday, in which they tried to claim that they had discovered a new, secret uranium enrichment site, was mostly ignored by the world. Jeffrey Lewis was quick to dismiss the accusation.

I had noted yesterday that Dianne Feinstein and Richard Durbin had tried to give Netanyahu some bipartisany-ness during his visit by inviting him to a closed-door meeting with Senate Democrats, but Netanyahu declined the invitation, inexplicably claiming that meeting would lend a partisan nature to his nonpartisan appearance before Congress. Bibi also got slapped down, though, as his bid to get several Arab ambassadors to show up for his speech has been rejected outright.

Just as the US military hates to see peace break out somewhere where they could otherwise be arming and training freedom fighters, Iran’s military seems especially upset by the prospect of a deal with the West. The IRGC is so upset about what is going on that today they broke one of their biggest toys in a fit of rage. Just under a year ago, word came out that Iran was building a replica of a Nimitz-class US aircraft carrier:

Intelligence analysts studying satellite photos of Iranian military installations first noticed the vessel rising from the Gachin shipyard, near Bandar Abbas on the Persian Gulf, last summer. The ship has the same distinctive shape and style of the Navy’s Nimitz-class carriers, as well as the Nimitz’s number 68 neatly painted in white near the bow. Mock aircraft can be seen on the flight deck.

The Iranian mock-up, which American officials described as more like a barge than a warship, has no nuclear propulsion system and is only about two-thirds the length of a typical 1,100-foot-long Navy carrier. Intelligence officials do not believe that Iran is capable of building an actual aircraft carrier.

Navy and other American intelligence analysts surmise that the vessel, which Fifth Fleet wags have nicknamed the Target Barge, is something that Iran could tow to sea, anchor and blow up — while filming the whole thing to make a propaganda point, if, say, the talks with the Western powers over Iran’s nuclear program go south.

Marcy had a bit of fun with the barge at the time, comparing it to our F-35 program.

But now, instead of waiting for the P5+1 talks to “go south”, the IRGC has chosen to destroy their target barge in war games that were launched today. And, just as predicted a year ago, the destruction of the barge was televised. From AP via the Washington Post:

State TV showed footage of missiles fired from the coast and the fast boats striking the mock U.S. aircraft carrier. The drills, which also included shooting down a drone and planting undersea mines, were the first to involve a replica of a U.S. carrier.

“American aircraft carriers are very big ammunition depots housing a lot of missiles, rockets, torpedoes and everything else,” the Guard’s navy chief, Adm. Ali Fadavi, said on state TV, adding that a direct hit by a missile could set off a large secondary explosion. Last month Fadavi said his force is capable of sinking American aircraft carriers in the event of war.

Here is a PressTV segment on the war games, complete with some footage of torpedoes hitting the barge:

Additional footage with more direct hits on the barge can be seen in this PressTV story.

The US Navy has now been sternly warned not to tow any barges into the Strait of Hormuz.