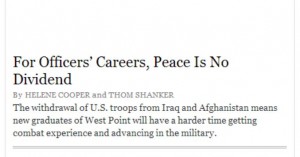 How can our country mistreat its best and brightest so mercilessly?

Oh, the poor class of 2014 at the United States Military Academy! This morning’s New York Times brings us the tragic news that this year’s class graduating from West Point must somehow find a way to advance their military careers without being deployed to a combat zone. What could our politicians be thinking to so senselessly deprive our “best and brightest” the chance to get those colorful “coveted combat patches on their uniforms”? Why did they pass up the chance to invade Syria? Can’t they send troops quickly to Ukraine? Get with it, Washington, these poor cadets need you:

For the first time in 13 years, the best and the brightest of West Point’s graduating class will leave this peaceful Hudson River campus bound for what are likely to be equally peaceful tours of duty in the United States Army.

“It started to hit home last year, when we started considering what we really wanted to do, and realized that there’s a much more limited opportunity to deploy,” said Charles Yu, who is majoring in American politics and Chinese. Cadet Yu, who will graduate this spring, is going into military intelligence in South Korea, where he hopes to get experience helping to manage the long-running conflict between North and South Korea. He will work at Camp Red Cloud near the demilitarized zone, or, as he put it, “as close as you can get to the DMZ.”

For Cadet Yu and the rest of the class of about 1,100 cadets, there may be few, if any, coveted combat patches on their uniforms to show that they have gone to war. Many of them may not get the opportunity to one day recall stories of heroism in battle, or even the ordinary daily sacrifices — bad food, loneliness, fear — that bind soldiers together in shared combat experience.

The end of the war in Iraq and the winding down of the war in Afghanistan mean that the graduates of the West Point class of 2014 will have a more difficult time advancing in a military in which combat experience, particularly since the attacks of Sept. 11, 2001, has been crucial to promotion. They are also very likely to find themselves in the awkward position of leading men and women who have been to war — more than two million American men and women have deployed to Iraq and Afghanistan — when they themselves have not.

But buck up, young soldiers! There is precedent for how to advance your careers in such desperate times:

Two months after graduation, Petraeus married Holly Knowlton, a graduate of Dickinson College and daughter of Army General William Knowlton, who was superintendent of West Point at the time.

Get on it, soldiers! I don’t know their marital status or ages, but it appears that the current commandant has both a son and a daughter, so choose your target appropriately.