In this post, I pointed out that we are going to see an empirical test of Piketty’s theory of rising wealth inequality. The theory itself is not well understood, and Piketty has revisited it since the publication of Capital in the Twenty-First Century, and published an economist’s dream of a paper in full mathematical glory here. The American Economics Association devoted space in its journal to arguments about the theory, giving Piketty an opportunity to discuss his theory in what I think is a very readable paper, and one worth the time.

He starts by saying that the relation between r, the rate of return to capital, and g, the rate of growth in the overall economy, are not predictive. They cannot be used to forecast the future, and are not even the most important factor in rising wealth inequality. The crucial factors are institutional changes and political shocks. Neither can the relation tell us anything about the decrease in the labor share of national income. He points to supply and demand for skills and education in this paper, as he does in his book, but this is a at best an incomplete explanation, owing more to the neoliberal view that the problems of workers are their fault than to a clear understanding of social processes in the US. A better explanation lies in tax law changes, changes in labor law and enforcement of labor law, rancid decisions from the Supreme Court, failure to update minimum wage and related laws, and government support for outsourcing and globalization.

What the theory does say is the subject of Part II.

I now clarify the role played by r > g in my analysis of the long-run level of wealth inequality. Specifically, a higher r − g gap will tend to greatly amplify the steady-state inequality of a wealth distribution that arises out of a given mixture of shocks (including labor income shocks).

In other words, as the raw number r – g increases, wealth inequality reaches a limit at a higher level, and income and wealth mobility become lower.

The inverted Pareto coefficient β is a measure of inequality used by Piketty and his colleagues. Here’s how he explains it in this paper:

The theoretical basis for this result can be found here, where Piketty and his colleague Gabriel Zucman provide a typical economists mathematical explanation. I’ve read some of this paper, but it is tough going.

The returns to capital, especially business capital, are quite a lot higher than the levels given in Piketty’s example. Here’s the chart: 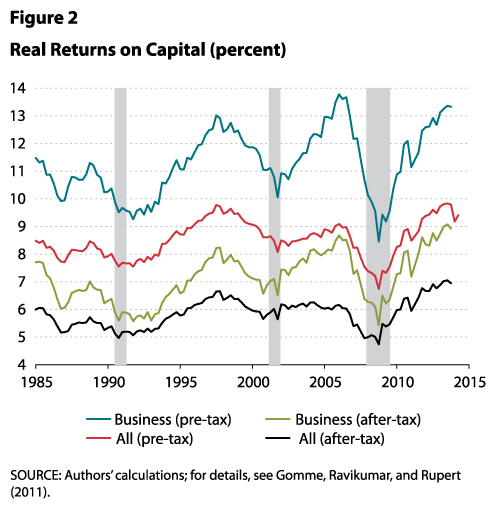 The returns to all capital after tax are about 7%. Paul Krugman put up a blog post saying that a realistic growth rate is about 2.2% at best for the next few years. This gives a difference r – g = 4.8%. Then using the equations on page 1356, we get an estimate that the inverted Pareto coefficient would be in the range of 11, which is a lot higher than the levels Piketty uses in the quoted material. By way of comparison, with that number, the average wealth of people with more than $10 million net worth would be $110 million. In the example Piketty gives for the top .1% with β =3.25, the figure would be $32.5 million.

Piketty notes that these coefficients are a rapidly rising function of r – g, which is apparently the case. In a recent paper, Emmanuel Saez and Gabriel Zucman estimate that the top .1% has a wealth share of 22% as of 2012, and there is every reason to think that has risen.

With Piketty’s general rule standing alone, there is no obvious limit to the level of wealth inequality, but in practice there are many practical reasons that it will level off. Some people will have more children, so the fortunes are divided into smaller shares. Some are lucky in investments and others aren’t. There are external shocks, wars and depressions. There are divorces, which split fortunes. Some people are able to earn high levels of labor income on top of capital income, increasing their wealth. Some die early, so their offspring are forced to spend more of their capital income to preserve their existing level of consumption. Others have expensive tastes and spend too much. These external forces eventually bring about a more or less static level of wealth inequality. Overall, this static level is higher when the fraction g/r is lower.

The time periods in the theoretical models used by Piketty and his colleagues are generational, they run 30 years. The big changes in wealth inequality began in the 70s, I’d guess, but became prominent enough that they were noticed in the late 80s and early 90s as the Reagan/Bush era tax cuts took hold, and regulatory structures were dismantled. By 2000, the final touches of formal deregulation were complete, and the Bush administration stopped enforcing most remaining laws leaving capital accumulation without restraint from legal pressure. It’s been about 15 years with little change, about half a cycle. The results follow the line Piketty and his colleagues predicted, and every year the new data supports their theories.

From this we can see that the coming empirical test is the maximum level of wealth inequality, or to put it another way, it’s a test of the downward pressures on the limits of wealth accumulation.

As a nation we have only taken the smallest possible steps to stem that tide, such as slow increases in the minimum wage, and tiny increases in taxes on the wealthiest to the extent they choose not to evade taxation in all sorts of allegedly legal ways. Neither of the presumptive candidates has any intention of making the kinds of changes necessary to change the outcome.

That brings us to the second empirical test: the level of wealth inequality that a civilized nation will accept before demanding change.

Or maybe the test is whether we are so cowed we won’t ever make any demands on our new lords and masters.

Update: for more on the uselessness of tweaks to the current system, see this interview by the excellent Lynn Parramore with Lance Taylor.

In the first stories about the Panama Papers, we got the names of a bunch of politicians, a few criminals, sports and other celebrities and one or two names of rich people. But in focusing solely on this kind of person, we miss the major point about tax havens. They are used by hundreds of thousands of people, including many who are not billionaires and who are not famous or otherwise newsworthy. They are commonly used by doctors, lawyers, accountants, small business owners and those who inherited money from such people.

Lisa Kiester of Duke University, a sociologist who has published on the 1% describes a group she calls the double rich in this article. These are people who are in the top 1% in both income and wealth. Their median wealth was about $12 million in 2010, and their median income was in the range of $1.2 million. Both have no doubt risen since then. Kiester does not give an estimate of the number of the double rich, but this New York Times article, using 2007 data, says that there is about a 50% overlap between the two groups. There were about 117 million households in 2010 according to the Census Bureau. From that we can estimate that there are about 560,000 households making up the double rich.

Kiester examines the lack of discontent with wealth and income inequality in this 2014 paper. She offers five explanations with supporting evidence from research:

!. Homophily, the tendency to hang out with people like us. We aren’t often exposed to the impact or the magnitude of wealth inequality.

2. People think things will get better because they always have.

3. There is some evidence of social mobility, and it’s even possible for people to think they could move into the top 1%.

4. People are too busy, distracted and stressed to care.

5. People focus on poverty, not inequality. Academics are concerned about inequality because they think huge wealth gaps lead to power imbalances that favor the rich at the expense of the rest of us. That’s completely outside the scope of most people’s worries about money.

Gabriel Zucman, one of Piketty’s collaborators, estimates that individuals have approximately $962 billion of unreported assets in tax havens. Source: Data figure 4 tab 1 from a spreadsheet found here; click on Tables and figures included in the book. The book is The Hidden Wealth of Nations. For a description of Zucman’s methodology see this by Cass Sunstein.

Kiester says that 56% of the top 1% by net worth were self-employed in 2010. These are people who have the means to move money into tax havens, as are the rest of the top 1%. There are hundreds of thousands of US citizens who would benefit from tax havens, and there is so much money out there by Zucman’s estimate that it must be that case that tens of thousands of them have done so.

This kind of disclosure would help break through the mental barriers to making inequality itself a force in politics.

The law firm’s [Mossack Fonseca] leaked internal files contain information on 214,488 offshore entities connected to people in more than 200 countries and territories. ICIJ will release the full list of companies and people linked to them in early May.