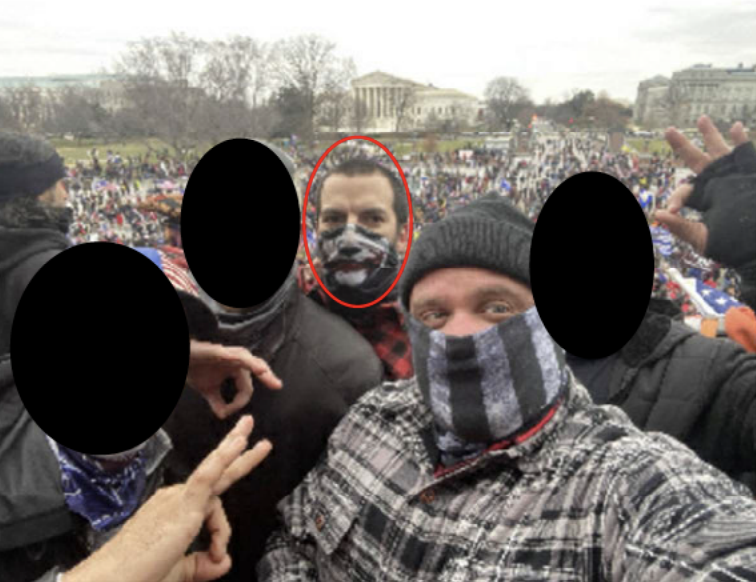 By my very quick review, there have just been a handful of January 6 defendants charged individually via indictment, without first being charged by complaint.

Lewis Cantwell was arrested in February for civil disorder and obstruction, but whose actions on January 6 are not laid out in any public court documents.

Richard Harris was arrested via indictment in March for resisting arrest and obstruction. A motion supporting detention revealed that Harris persuaded cops to back down at one of the entrances and picked up a phone and purported to threaten Nancy Pelosi; he had assaulted a journalist at a protest in December in Oregon and — though this is contested — lived out of his car after that time.

Daniel Rodriguez was arrested via indictment in March for tasing Michael Fanone, among other things. A HuffPo article, which in turn relied on the work of various volunteer Sedition Hunters, had already provided ample introduction on Rodriguez.

The Klein brothers — Matthew and Jonathanpeter — probably count as one unit. They were charged via conspiracy indictment in March. Their drawn out detention fight showed one or both have ties to the Proud Boys, they followed Dominic Pezzola in the Senate side door, and then later successfully breached the North Door.

Other than that, people have been initially charged via indictment in group or conspiracy indictments: Verden Nalley got indicted along with William Calhoun a month after Calhoun was first charged. Albuquerque Cosper Head and Kyle Young were indicted for assault along with Thomas Sibick, who had already been charged. Taylor Johnatakis and Isaac Sturgeon were indicted on assault charges with Craig Bingert, who had already been charged. A now sprawling assault indictment including Jack Whitton, Clayton Mullins, and Michael Lopatic started with complaints against Jeffrey Sabol and Peter Stager. Another sprawling assault indictment including Tristan Stevens, David Judd, Christopher Quaglin, Robert Morss, and Geoffrey Sills built off a Patrick McCaughey complaint.

When some of the militia members got added to one or another indictment — Matthew Greene to one of the Proud Boys indictment, and several Oath Keepers to that omnibus indictment — they were indicted without a complaint first.

Which is to say, in this investigation, it has been very rare for an individual to be initially charged via indictment.

That’s why it’s notable that the government arrested Ricky Willden yesterday, a Proud Boy from Northern California, on assault and civil disorder charges via an indictment obtained a week earlier. The government issued a press release that describes that Willden was on the East side cheering as a bunch of Marines and one co-traveller opened the door, then sprayed some stuff at cops guarding the door.

The Proud Boys is a group self-described as a “pro-Western fraternal organization for men who refuse to apologize for creating the modern world; aka Western Chauvinists.” In publicly available videos recorded on Jan. 6, Willden can be seen in a crowd near the east door of the Capitol at 2:24 p.m. (according to time stamps in one of the videos) wearing a dark jacket, beanie cap and gloves, and cheering as the doors to the Capitol opened. At 2:35 p.m., he can be seen raising his hand and spraying an unknown substance from a green can toward police officers who were standing guard at the east door.

But because the government arrested Willden via indictment, they don’t have to release a public explanation of their probable cause to arrest him. Indeed, the press release pointedly cites “publicly available videos” to back the only allegation it makes.

One reason to charge someone on indictment rather than complaint is to hide the identity of witnesses who have testified. I find that particularly interesting, in part, because there were several people who posed in Joe Biggs’ picture on the East side, but thus far, just Paul Rae and Arthur Jackman have been identified from the picture (though Biggs surely knows who the others are). While the government has ostentatiously rolled out one after another Oath Keeper cooperator — first Jon Schaffer, then Graydon Young, and yesterday Mark Grods — aside from an unindicted co-conspirator identified in some of the Proud Boy indictments (UCC-1), whose identity those charged also know, the government has hidden the cooperators it has surely recruited from the notoriously back-stabbing group.  The hybrid approach the government has used — charging five overlapping conspiracies but also charging a bunch of Proud Boys who worked in concert with others individually — has (surely by design) made it harder for both participants and observers to understand what the government has in hand. There have been a few inconclusive hints that one or another person has flipped (or that Judge Tim Kelly, who has presided over most of the Proud Boys cases, had a sealed hearing that might reflect a plea deal), but nothing concrete.

For weeks it has been clear that unpacking how it happened that two militias and a bunch of Marines converged on the East Door as if all had advance warning would be one key to demonstrating the larger conspiracy behind the January 6 insurrection.

But just as DOJ has rolled out a new player in those events, they’ve moved everything to a grand jury to hide its secrets. 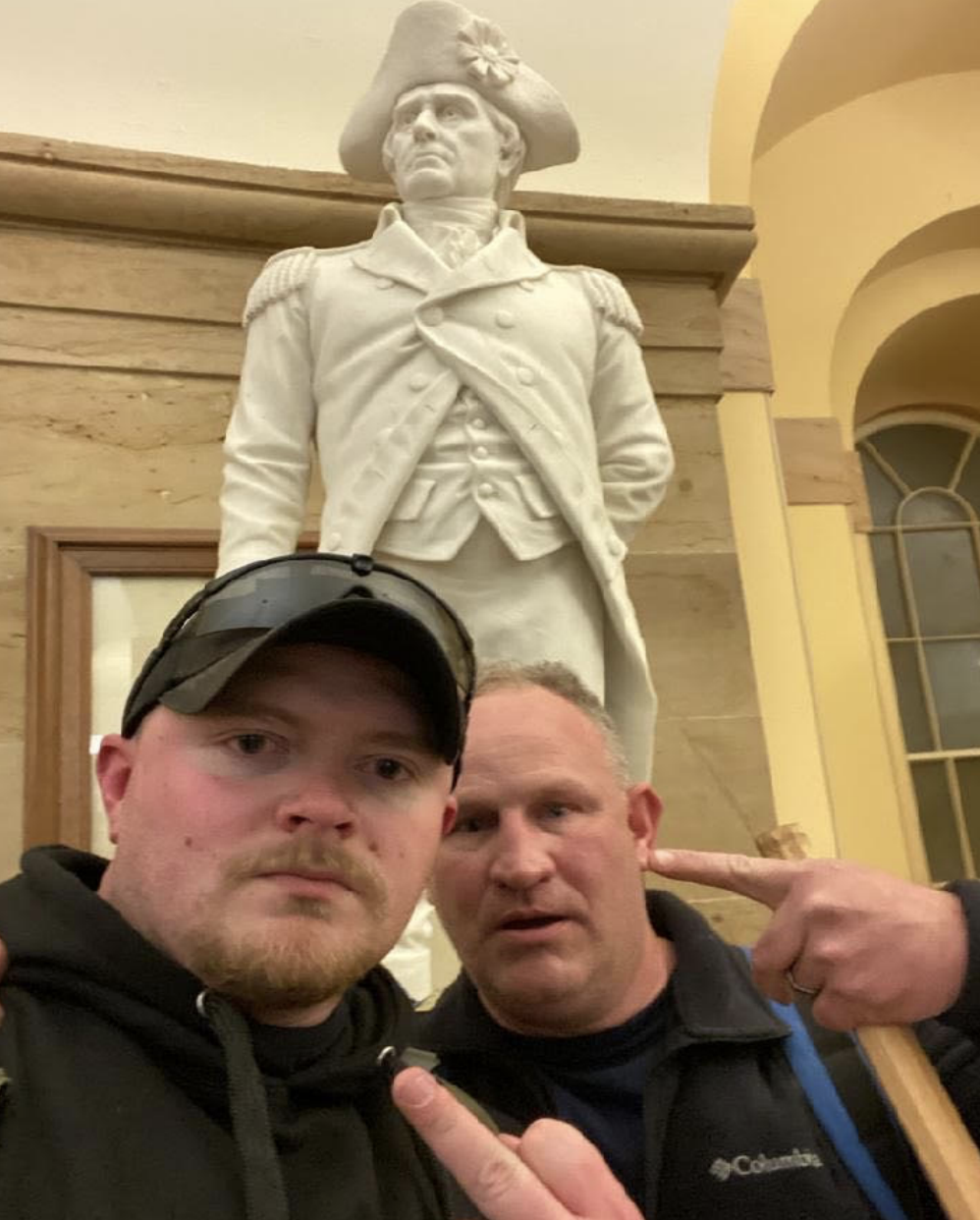 Yesterday, DOJ unsealed an indictment against the two selfie cops, Thomas Robertson and Jacob Fracker. The two were originally charged on January 12 — among the first to be charged — after they shared pictures of their exploits with colleagues at the Rocky Mount, VA police department, who in turn alerted the FBI.

Both are military veterans and Fracker remained in the VA National Guard when he was arrested.

The two were originally charged with two trespassing charges, 18 USC 1752 and 40 USC 5104. But the indictment adds the more serious obstruction charge DOJ has used against other more dangerous defendants, 1512(c)(2), along with an aiding and abetting charge for the same, 18 USC 2. That’s a felony that, if they’re convicted, will mean the two men will no longer be able to own guns (and probably won’t work in law enforcement anymore).

I want to look at how DOJ seems to be using that charge, because I expect more people will have it added as their case move to indictment.

The charge is an unusual application of what is normally treated as a witness tampering statute, which most people think of in conjunction with investigations and prosecutions. But the certification of the vote is every bit as much an “official proceeding” as an investigation or trial is. The standard boilerplate being used in insurrectionist charging documents establishes that the vote certification was suspended from 2:20PM, literally minutes after rioters first breached the Capitol, until shortly after 8PM.

Up until the indictment against the cops was unsealed, DOJ had used the 1512 charge primarily with people who, in their charging documents, were shown to have done more (there were around 28 before these cops were charged with it). They include:

Aside from serving as a way to bring felony charges against a defendant, perhaps because the government believes the person to be a greater threat, there’s no clear rhyme or reason to this.

The primary hint of the Selfie Cops doing something like that came, after the fact, in boasts from Robertson claiming to have “attacked the government.”

“CNN and the Left are just mad because we actually attacked the government who is the problem and not some random small business … The right IN ONE DAY took the f***** U.S. Capitol. Keep poking us.” He also stated that he was “proud” of the photo in an Instagram Post that was shared to Facebook, because he was “willing to put skin in the game”

But it is also the case that the initial complaints seemed to function as a kind of triage, a way to get participants in the insurrection into the legal system to allow more focused investigation of them. Undoubtedly, the FBI continued to investigate after the initial charges.

And such an investigation — especially for people whose initial arrest didn’t rely on search warrants and who were arrested before the shape of the attack became more clear — might reveal evidence that these two cops had something more in common with the others charged with 1512, such as explicit plans to shut down the vote count or ties to a militia organization. And unlike the arrest affidavits, which put so much evidence in a few pages, we shouldn’t expect to see any of that evidence for a charge in an indictment until a litigation leading up to a trial. Indeed, that may be why DOJ feels free to include the charge in order to raise the stakes on the prosecution: because they can do so without having to tip their hand to other coup conspirators.

I expect we’ll see more 1512 charges, which will separate the people DOJ is truly concerned about from those who stupidly trespassed in support of their idol Donald Trump.

Update: DOJ did the same thing with Richard “Bigo” Barnett. In his case, he’s facing enhancements on some of these charges because he had a stun gun walking stick with him.