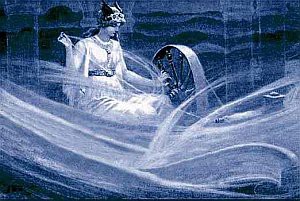 Yeah, you can thank Frīġe for her dæġ — Friday is her day. Frigg, Frea, or Freyja, has been lumped into sky-and-weather-goddesses category though I don’t recall running across a folktale about her actually doing weather-y stuff.

Hope you were prepared for snow if you live in eastern U.S.; Frigg won’t be as much help to you as a decent snow shovel. Same with keeping the kids busy on a snow day. Maybe you could coax them into writing a story about Frigg calling up a snow storm, replete with drawings?

Speaking of weather…and climate…
These news stories suggest snowpocalyptic events here in the U.S. aren’t the only unusual conditions affecting the way we do business today.

Dutch tech firm Philips’ sale of Lumileds division halted
No specific details were shared, but the Senate Committee on Foreign Investment in the United States (CFIUS) blocked the sale of Philips’ California-based lighting component manufacturing subsidiary. Note the article refers to “Asian buyers,” and mentions further down the story that Chinese firms were involved in the buyers’ consortium.

Seems odd this sale was blocked by CFIUS, but not that of chipmaker OmniVision Technologies last May, or Freescale Semiconductor in March (though perhaps the previous owners of Freescale may have been a factor).

Military vendor for AV and building systems sold devices with backdoor
Not only a hidden backdoor, but packet sniffing capabilities found in the AMX brand NX-1200 model building controls device.

But backdoors are a good thing, right? No?

That’s a wrap on this week. Hope those of you along the east coast expecting heavy snow are prepared with ample alcoholic beverages for what appears to be a long weekend. Make an offering to Frigg and see if it helps. Offer another to the person who shoveled your snow.