When we started the 2011 Formula One season back in March, I noted that 2011 is the 50th anniversary of the magical 1961 F1 season in which Phil Hill, driving for Ferrari, became the first, and other than Mario Andretti in 1978, only American Formula One Grand Prix World Champion. From our season opening post in March, Circus Starts Anew, 50 Years On From the Yankee Champion:

As starts the 2011 Formula One season, so too started the 1961 F1 season fifty years ago. For all the differences brought by technology and time over five decades, there is much in common. The excitement and anticipation of the drivers, the longing to put the knowledge of the off season testing and tech changes finally to proof in actual race conditions, the first drivers’ meetings of the season, the beautiful people and the eyes of the international sporting world focused. There is nothing like the Formula One circus; that was the case then as much as it is now.

Longtime regulars here at the Emptywheel Trash Talk threads will likely remember that I had the privilege of knowing Phil Hill as I was growing up. Phil was the first, and still one of only two (Mario Andretti), Americans to win the Formula One Grand Prix World Championship and his career was immortalized in the excellent biography Yankee Champion by William Nolan. 2011 is the fiftieth anniversary of his championship season. In honor of that, I will be comparing and remembering the races and excitement of the 1961 season over the course of the current season. See here for some simply superb [Cahier Archive] photos from the 1961 season.

Phil was my friend, and my mentor. I miss him. 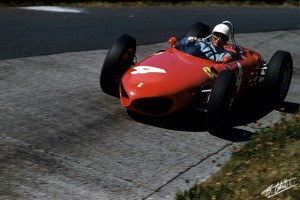 This will be the last formal installment in the 1961 retrospective series. While there are 19 races in this year’s 2011 F1 schedule, with six remaining after the Italian, there were only eight races on the 1961 docket. The Italian was the seventh and penultimate race, and the one that will not only live in infamy, but in which the Championship was determined. Indeed, with both the Driver’s and Constructor’s Championships decided at Monza in the Italian, and in light of the tragic death of their star factory driver, Count Wolfgang von Trips, the dominant Ferrari team did not even travel the Atlantic to contest the final race, the inaugral United States Grand Prix at Watkins Glen, NY.

So, in 1961 all the marbles came down to the famed steep banked course at Autodromo Nazionale Monza, END_OF_DOCUMENT_TOKEN_TO_BE_REPLACED