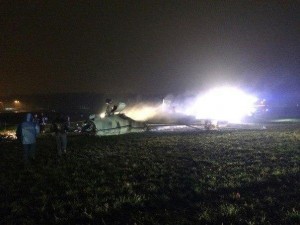 And no snow. This particular photo is rather pixelated, but it doesn’t reflect reduced visibility due to snowfall. There’s no snow in the second video link above, though visibility has worsened. 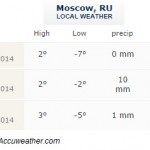 Other photos from the site similarly reflect no snow. Almanac data from the 48-72 hours before and after the crash reflects temperatures dropping below freezing, but 1 mm to 11 mm of unspecified precipitation between Monday and Tuesday in Moscow depending on the weather site consulted. There had been some snow, the first of the season, on Sunday night local time, but almanac data doesn’t reflect the same amount falling on Monday evening, nor does the almanac data shown in the graphic here report the precipitation on the correct date. (The 10 mm on Monday matches the photo of Sunday’s first snowfall, not the images published of the airport and crash site late Monday night/Tuesday.)

Could there have been a vehicle on the tarmac treating the surface with de-icer? Sure — but why didn’t the various accounts report just that? Not one report out I’ve seen in the last 24 hours has suggested runway icing was a problem.

Could the driver have been drunk? Hell yeah — it’s Russia, where alcoholism is extremely common and too often deadly. But the driver’s lawyer has said the driver was not under the influence as he takes a prescription heart medicine which does not mix with alcohol. Yet more reports indicate the dispatchers may have erred in their instructions, or were themselves under the influence.

Given the tensions between the west and Russia about Ukraine, and the subsequent likely attempts to unsettle Russia’s economy via oil price volatility, and given Total Oil’s position as fourth largest petroleum company, my hinky meter is stuck somewhere between Suspicious and Disbelieving as to the real cause of the CEO’s death.

Whether this tragic event was an accident or deliberate malfeasance, the question I’d like answered is cui bono? Who or what benefited the most from de Margerie’s untimely demise?

He was characterized as “staunch defender of Russia and its energy policies amid the conflict with Ukraine,” and a critic “of Western sanctions against Iran and Russia.”

De Margerie’s last speech in front of Russia’s Foreign Investment Advisory Council during the day Monday was very pro-Russian, pro-oil development and anti-sanction. This is consistent with the CEO’s comments in September when Total’s joint venture with Russia’s Lukoil was halted due to the sanctions. In August, Margerie had expressed commitment to Yamal LNG, a joint venture development project between France’s Total and Russia’s OAO Novatek:

“I am doing everything,” to make progress, Chief Executive Officer Christophe de Margerie said in an interview on Yamal LNG. “There no reason to think that it won’t happen.”

One might reasonably assume the west had a beef with de Margerie, especially if there were any indications he encouraged work undermining sanctions intended to punish Russia for its incursion on Ukraine.

An additional risk factor for de Margerie was Total’s relationship with Iran; the firm had a long history with Iran, having developed its South Pars gas field prior to sanctions in 2009. Margerie kept Total’s foot in Iran’s door, meeting with Iranian president Hassan Rouhani at Davos this year. The CEO hoped to position Total to benefit once sanctions against Iran relaxed. This stance could certainly annoy a few key entities quite a bit.

After an initial outpouring of condolences and florid eulogies for a larger-than-life industry leader, other skeptics have emerged. Russian tabloid Komsomolskaya Pravda suggests the crash was the work of Ukrainian special forces. A more measured France 24 says the facts about the accident are “highly contradictory.”

Given the lack of clarity about:

— actual atmospheric and ground conditions at the time of the crash;

— the condition of the snowplow driver;

— the dispatcher(s) who instructed the snowplow driver and cleared de Margerie’s plane to take off;

— the possibility that the pilot may have made any errors contributing to the accident;

— the likelihood de Margerie had annoyed one or more powerful entities with his in-your-face approach to oil and gas development;