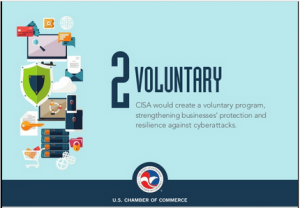 The Chamber of Commerce has a blog post pitching CISA today.

It’s mostly full of lies (see OTI’s @Robyn_Greene‘s timeline for an explication of those lies).

But given Sheldon Whitehouse’s admission the other day that the Chamber exercises pre-clearance vetoes over this bill, I’d like to consider what the Chamber gets out of CISA. It claims the bill, ” would help businesses achieve timely and actionable situational awareness to improve theirs and the nation’s detection, mitigation, and response capabilities against cyber threats.” At least according to the Chamber, this is about keeping businesses safe. Perhaps it pitches the bill in those terms because of its audience, other businesses. But given the gross asymmetry of the bill — where actual humans can be policed based on data turned over, but corporate people cannot be — I’m not so sure. 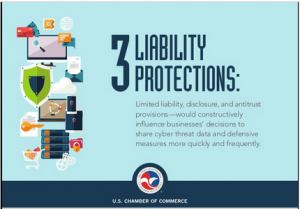 And therein lies the key.

Particularly given increasing calls for effective cybersecurity legislation — something with actual teeth — at least for cars and critical infrastructure, this bill should be considered a corporatist effort to stave off more effective measures that would have a greater impact on cybersecurity.

That is borne out by the Chamber’s recent 5 reasons to support CISA post. It emphasizes two things that have nothing to do with efficacy: the voluntary nature of it, and the immunity, secrecy, and anti-trust provisions in the bill.

That is, the Chamber, which increasingly seems to be the biggest cheerleader for this bill, isn’t aiming to anything more than “situational awareness” to combat the scourge of hacking. But it wants that — the entire point of this bill — within a context that provides corporations with maximal flexibility while giving them protection they have to do nothing to earn.

CISA is about immunizing corporations to spy on their customers. That’s neither necessary nor the most effective means to combat hacking. Which ought to raise serious questions about the Chamber’s commitment to keeping America safe.