The Other Factor in the DNC Hack: WikiLeaks’ Personal War with Hillary Clinton

Since yesterday, both Jack Goldsmith and Peter Singer have had offered some interesting perspective on the alleged Russian hack of the DNC. 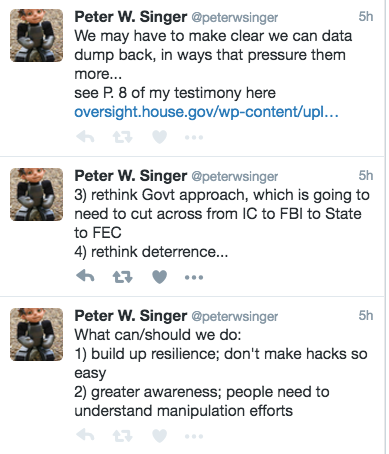 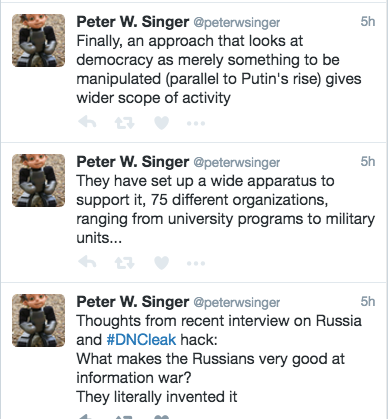 His linked (recent) Oversight testimony which discussed how much more complex cyber deterrence is than Cold War nuclear deterrence is.

For his part, Goldsmith first considered what was old and new in the hack, finding the only real new thing was releasing the emails.

While there is nothing new in one nation using its intelligence services to try to influence an election in another, doing so by hacking into a political party’s computers and releasing their emails does seem somewhat new.

He then dismissed the notion — floated elsewhere — that this amounts to cyberwar while implying that the US has to get far better at defending our own networks and systems.

How seriously do you think the government takes issues of cyberwarfare? Do you feel confident about our defensive capabilities and competence?

“Cyberwar” is a misleading term—the Russian hack, if it is that, is not an act of war, at least not by traditional standards. It is closer to an intelligence operation with the twist of a damaging publication of the stolen information. That said, the U.S. government takes all major cyberoperations against it and its major public and private institutions very seriously. My confidence about our defensive capabilities and competence depends on what institutions you are talking about. Today, some components of the government (e.g. the Defense Department) do better than others (e.g. the Office of Personnel Management, which recently suffered an very damaging hack). And private sector defenses, even of important critical infrastructure networks, are a very mixed bag. The scale of the challenge is enormous, and offense has many advantages over defense. I don’t know anyone who is sanguine about our defensive capabilities overall.

Then he went on a Twitter rant directed at the hand-wringing about how unusual this is.

1/ In assessing the DNC hack, remember that USG is no innocent when it comes to infiltrating foreign computer networks.

2/ The cyber-attack on Iranian nuclear centrifuges was one of the most consequential in history.

6/ It’s also well known that US has in past used covert ops to influence foreign elections.

11/ The point is that USG plays rough in cyberspace, and should expect others to do so as well.

12/  And yet USG seems perpetually unprepared. DNC hack is tiny tip of iceberg of possible electoral disruptions via cyber.

In short, both think this is something other than cyberwar, but view the importance of it differently (even while both provide suggestions for a policy framework to respond), particularly the uniqueness of the perceived sabotage of the election. But their discussion (along with virtually everyone else’s) has pitched this as a two-front question, us against Russia, though Singer’s testimony has a lot of discussion about how much more complexity there is to this issue, including the non-state actors who might be involved.

After having dismissed the unthinking equation of 2 intelligence hacks = Guccifer = Russia = WikiLeaks = Russia story, I want to return to it to complicate matters somewhat, to talk about Wikileaks role whether or not it cooperated with Russia on this. First, what follows is in no way meant to be a defense of Wikileaks’ action here, which included the inclusion of credit card and social security information in the dump.

Update: see this post on where the Turkey files came from, which came from Phineas Fisher; it wasn’t Wikileaks.

But I want to consider how different its role is with the target of this leak — Hillary Clinton (and Democrats more generally) — and Turkey.

Most of the discussion about the where and whyfor of the leak assumes it is all about Russia’s interest (assuming, of course, that this was a Russian state hack). But consider why Wikileaks might want to leak in this way and at this time.

Hillary was, of course, Secretary of State when Wikileaks leaked the State department cables and pushed aggressively for Chelsea Manning’s prosecution (as Charlie Savage wrote in a piece published just before I finished this, this is a point Assange made when he discussed the emails 6 weeks ago). She has, since then, been found to treat information claimed to be far more sensitive in careless fashion (as has the State Department generally).

Very importantly, State worked closely with DOJ as it investigated Wikileaks. There is very good reason to believe that as part of that investigation, DOJ mapped out Wikileaks’ supporters and, possibly, financial contributors — that is, precisely the kind of people, to the DNC, that Wikileaks just doxxed. That’s arguably a violation of Section 215, which includes First Amendment protections.

We also know that GCHQ was (at least as a SIGDEV research project, but those often serve to conduct surveillance that wouldn’t really fly within other legal guidelines) collecting log files of people who visit Wikileaks.

We know that under pressure from the US government, traditional funding sources stopped taking donations for Wikileaks. I’ve seen hints of some legally dubious action that may be worse, as well. In addition, in 2012, the FBI considered Bitcoin donations to Wikileaks among the many nefarious things one could do with Bitcoin.

Love or hate Wikileaks, but it — and its political and financial supporters — were tracked. Its sources of funding were cut off. And then the government realized that Wikileaks (at that point, at least) was engaging in what a lot of media outlets also do and conceded it couldn’t charge Assange for those activities.

Now I’m not trying to say two wrongs make a right — that because FBI collected data implicating innocent supporters of Wikileaks, it is okay for Julian Assange to dox all the DNC’s supporters.

Rather, I’m trying to raise this in the context of the issues that Singer and Goldsmith lay out. Whether Wikileaks cooperated with Russia (if Russia did the hack) or not, it is a key player in this leak. Even if Russia did this to help Trump, Assange executed the leaks to maximal damage to Hillary (and I suspect Wikileaks will continue to do more damage with further leaks). What does this say about issues of retaliation against non-state actors working with the sphere of state actors, as people consider information war in the era of cyber?

I don’t know the answer to that, but as we raise the question, those issues need to be addressed as readily as the state actor question. The way this rolls out may be as much a question of a non-state actor retaliating against a political figure as it is a state actor trying to elect its preferred candidate.