Throughout the presidential campaign, observers have noted with irony that many on the right discovered a new-found love for WikiLeaks. Some of the same people who had earlier decried leaks, even called Chelsea Manning a traitor, were lapping up what Julian Assange was dealing on a daily basis.

There was a similar, though less marked, shift on the left. While many on the left had criticized — or at least cautioned about — WikiLeaks from the start, once Assange started targeting their presidential candidate, such leaks became an unprecedented, unparalleled assault on decency, which no one seemed to say when similar leaks targeted Bashar al-Assad.

Which is why I was so amused by the reception of this story yesterday. 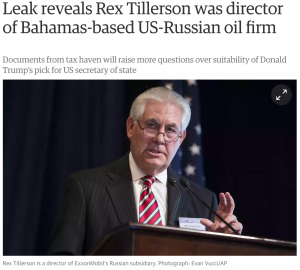 After revealing that Donald Trump’s Secretary of State nominee “was the long-time director of a US-Russian oil firm based in the tax haven of the Bahamas, leaked documents show” in the first paragraph, the article admits, in the fourth paragraph that,

Though there is nothing untoward about this directorship, it has not been reported before and is likely to raise fresh questions over Tillerson’s relationship with Russia ahead of a potentially stormy confirmation hearing by the US senate foreign relations committee. Exxon said on Sunday that Tillerson was no longer a director after becoming the company’s CEO in 2006.

The people sharing it on Twitter didn’t seem to notice that (nor did the people RTing my ironic tweet about leaks seem to notice). Effectively, the headline “leaks reveal details I have sensationalized” served its purpose, with few people reading far enough to the caveats that admit this is fairly standard international business practice (indeed, it’s how Trump’s businesses work too). This is a more sober assessment of the import of the document detailing Tillerson’s ties with the Exxon subsidiary doing business in Russia.

This Guardian article worked just like all the articles about DNC and Podesta emails worked, even with — especially with — the people decrying the press for the way it irresponsibly sensationalized those leaks.

The response to this Tillerson document is all the more remarkable given the source of this leak. The Guardian reveals it came from an anonymous source for Süddeutsche Zeitung, which in turn shared the document with the Guardian and the International Consortium of Investigative Journalists.

The leaked 2001 document comes from the corporate registry in the Bahamas. It was one of 1.3m files given to the Germany newspaper Süddeutsche Zeitung by an anonymous source.

The documents from the Bahamas corporate registry were shared by Süddeutsche Zeitung with the Guardian and the International Consortium of Investigative Journalists in Washington DC.

That is, this document implicating Vladimir Putin’s buddy Rex Tillerson came via the very same channel that the Panama Papers had, which Putin claimed, back in the time Russia was rifling around the DNC server, was a US intelligence community effort to discredit him and his kleptocratic cronies, largely because that was the initial focus of the US-NGO based consortium that managed the documents adopted, a focus replicated at outlets participating. 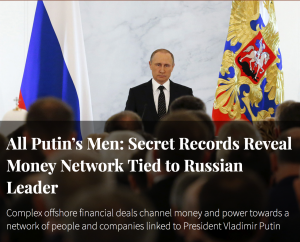 There really has been a remarkable lack of curiosity about where these files came from. That’s all the more striking in this case, given that the document (barely) implicating Tillerson comes from the Bahamas, where the US at least was collecting every single phone call made.

That’s all the more true given the almost non-existent focus on the Bahamas leaks before — from what I can tell just one story has been done on this stash, though the documents are available in the ICIJ database. Indeed, if the source for the leaks was the same, it would seem to point to an outside hacker rather than an inside leaker. That doesn’t mean the leak was done just to hurt Tillerson. The leak, which became public on September 21, precedes the election of Trump, much less the naming of Tillerson. But it deserves at least some notice.

For what it’s worth, I think it quite possible the US has been involved in such leaks — particularly given how few Americans get named in them. But I don’t think the Panama Papers, which implicated plenty of American friends and even the Saudis, actually did target Putin.

Still, people are going to start believing Putin’s claims that this effort is primarily targeted at him if documents conveniently appear from the leak as if on command.