Incidental Collection Under Section 702 Has Probably Contributed to Trump’s Downfall, Too

As you’ve no doubt heard, the House passed the bad reauthorization to Section 702 yesterday. The Senate will vote on cloture on Tuesday — though both Rand Paul and Ron Wyden have threatened to filibuster it — and will almost certainly be voted into law after that.

I’ll have comment later on the rising costs, for politicians, for mindlessly reauthorizing these bills in a follow-up post.

But for the moment, I want to comment on the debate that took place in response to Trump’s two tweets. The first tweet, which was clearly a response to a Judge Napolitano piece on Fox News yesterday morning, complaining about FISA. 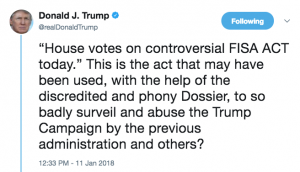 Then, after a half hour lesson from Paul Ryan on the different FISA regimes (note, for some reason Devin Nunes was conspicuously absent from much of this process yesterday, both the coddling of the President and managing debate on the bill), a follow-up tweet hailing Section 702’s utility for “foreign surveillance of foreign bad guys on foreign land.” 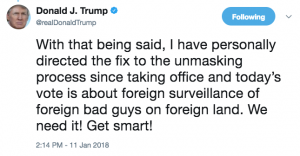 In response to those tweets, many commenters stated, as a matter of fact, that Trump hasn’t been impacted by Section 702, that only traditional FISA intercepts drove key developments in the Russian investigation.

That’s unlikely to be true, and I suspect we already have evidence that that’s not the case.

To defend the case that incidental collection off a traditional FISA order has impacted Trump’s administration, people point to the December 29, 2016 intercepts of communications between Sergey Kislyak and Mike Flynn which were cited in Flynn’s guilty plea. It is true that those intercepts were done under a traditional FISA order. Admiral Mike Rogers as much as confirmed that last March in his efforts to explain basic FISA law to the House Intelligence Committee Republicans who are supposed to oversee it.

Rogers: FISA collection on targets in the United States has nothing to do with 702, I just want to make sure we’re not confusing the two things here. 702 is collection overseas against non US persons.

And Speaker Ryan, fresh off his efforts to teach the President basic surveillance law, yesterday clarified — inaccurately — that,

Title 1 of the FISA law is what you see in the news that applies to U.S. citizens. That’s not what we’re talking about here. This is Title 7, Section 702. This is about foreign terrorists on foreign soil.

Whatever the facts about FISA orders targeting Carter Page and Paul Manafort, the intercepts that have done the most known damage to the Trump Administration so far targeted a foreigner on US soil, Sergey Kislyak, and Flynn just got picked up incidentally.

But as I said, I suspect it is highly likely the Trump Administration has also been brought down by an American being caught up incidentally in a Section 702 tasking. That’s because of several details pertaining to the George Papadopoulos plea which I nodded to here; they strongly suggest that Papadopoulos’ Facebook communications with Joseph Mifsud were first obtained by the FBI via Section 702, and only subsequently parallel constructed using a warrant. It’s further likely that the FBI obtained a preservation order on Papadopoulos’ Facebook account before he deleted it because of what they saw via Section 702. [Update: KC has alerted me that they may not have gotten a preservation order, but instead were able to access the Facebook account because that content doesn’t all go away when you deactivate an account, which is what the October 5 document describes as happening.]

Compare the two descriptions of how Papadopoulos obstructed justice. The July 28, 2017 affidavit supporting Papadopoulos’ arrest describes Papadopoulos destroying his Facebook account to hide conversations he had with Timofeev.

The FBI recorded both interviews, suggesting they already by January 27 they had reason to worry that Papadopoulos might not tell the truth.

The October 5 statement of the offense describes one of Papadopoulos’ false statements this way:

PAPADOPOULOS failed to inform investigators that the Professor had introduced him to the Russian MFA Connection [Timofeev], despite being asked if he had met with Russian nationals or “[a]nyone with a Russian accent” during the Campaign. Indeed, while defendant PAPADOPOULOS told the FBI that he was involved in meetings and did “shuttle diplomacy” with officials from several other countries during the Campaign, he omitted the entire course of conduct with the Professor and the Russian MFA Connection regarding his efforts to establish meetings between the Campaign and Russian government officials.

And it describes his obstruction this way:

On or about February 23, 2017, defendant PAPADOPOULOS ceased using his cell phone number and began using a new number.

In neither document does FBI mention having the content of Papadopoulos’ April 2016 Skype calls with Timofeev and neither one cites data — such as texts — that might have been on his cell phone.

What FBI (probably) learned when

In a drunken conversation in May 2016, Papadopoulos told the Australian Ambassador Alexander Downer that he had been told (by Joseph Mifsud, but it’s not clear Papadopoulos would have revealed that) the Russians had dirt on Hillary in the form of emails.

Again, this is just a guess, but given the evolution of FBI’s understanding about Papadopoulos laid out above, it seems highly likely that FBI had obtained some (but not all) of Mifsud’s communications before February 16, had submitted preservation requests to Papadopoulos’ providers, but had not yet obtained any legal process for content via Papadopoulos. Given that Papadopoulos’ Facebook content was preserved even in spite of his effort to destroy it, it seems clear the government had reason to know its content was of interest, but it did not yet know about his Facebook communications with Timofeev. This is how FBI routinely launders Section 702 information through criminal process, by getting a warrant for the very same content available at PRISM providers that they already obtained via PRISM. They key detail is that they appear to have known about the content of some but not all of Papadopoulos’ Facebook messages in time to preserve the account before February 16.

Once FBI opened a full investigation into the Russian ties — which we know they did in late July, in part because of that Papadopoulos conversation about the Mifsud comments — it could task and obtain a raw feed of any known PRISM account for any foreigner overseas associated with that investigation. Once it identified Mifsud as Papadopoulos’ interlocutor — and they would have been able to identify their common relationship from their common front organization, the London Centre of International Law Practice — they would have tasked Mifsud on any identifier they could collect.

And collecting on Facebook would be child’s play — just ask nicely. So it would be shocking if they hadn’t done it as soon as they identified that Mifsud was Papadopoulos’ interlocutor and that he had a Facebook account.

If all this is right — and it is admittedly just a string of well-educated guesses — then it means FBI’s ability to incidentally collect on Papapdopoulos by targeting Mifsud may have been what led them to take action to preserve Papadopoulos’ Facebook content, and with it evidence of ongoing communications with Timofeev that he had tried to hide.

And the fact that he did try to hide it is what led to Mueller flipping his first cooperating witness.

This is how Section 702 is supposed to work, and could be done under USA Rights

If we’re going to have this program, it should be used to target suspect agents of a foreign power located overseas, as Mifsud clearly was. If he was targeted under 702, he was targeted appropriately.

But there is no reason to believe doing so required any of the more abusive uses of 702 that USA Rights would limit. Unless Mifsud was already tasked at FBI when they opened the investigation in July 2016, there’s no reason to believe this account could have been found off of a back door search at FBI. Mifsud may have been tasked at NSA or even CIA, but if he was, searching on Papadopoulos because the government suspected he was being recruited by a foreign power would fall under known justifications for back door searches at those foreign intelligence agencies (especially at CIA).

USA Rights would permit the use of this 702 information to support the criminal case against Papadopoulos, because it’s clearly a case of foreign government spying.

And no use of the Tor exception would be implicated with this search.

In other words, Section 702 as Ron Wyden and Rand Paul and Justin Amash and Zoe Lofgren would have it would still permit the use of Section 702 as a tool to — ultimately — lead FBI to figure out that Papadopoulos was hiding his contacts with Ivan Timofeev.

As it turns out, the kinds of people Trump’s foreign policy advisor George Papadopoulos was chatting up on Facebook — Joseph Mifsud and Ivan Timofeev — are precisely the kind of people the FBI considers “foreign bad guys on foreign land” for the purposes of Section 702, meaning the Bureau could get their Facebook account quite easily.