There’s a really funny line in Rosalind Helderman’s profile of Rob Goldstone in conjunction with the release of his book. First, Helderman comically asserts that Goldstone — who did an interview for a long piece in the British Times that helped witnesses coordinate their stories last November — kept his mouth shut about his testimony.

Goldstone has emerged as a rare independent voice in the Russia story — one of the few witnesses who voluntarily sat with any investigator who asked and, out of courtesy to the process, kept his mouth shut along the way.

Helderman suggests she would know about witnesses who had provided testimony to investigators even if they kept their mouths shut. While it’s true that Helderman gets leaks from places few other journalists do (indeed, it’s one reason I did not share everything I knew with certain investigators, to prevent leaks through her), I’m fairly certain that a pretty significant number of witnesses have managed to stay quiet.

The comment is all the funnier given how the at-times-conflicting-with-the-sworn-record WaPo story ends, with Goldstone falsely claiming that the first time he started thinking of the June 9 meeting again after it happened was when the WaPo called him on July 9 and asked him if he set up the meeting.

Then, he said, he did his best to put the meeting out of his mind — until more than a year later, when the New York Times broke the news of the gathering.

Sitting at lunch at a cafe in Greece the next day, he received a call from a Post reporter, inquiring if he had set up the encounter.

The claim is false on a number of fronts. Goldstone made some efforts (albeit, according to his sworn testimony, reluctantly) to set up a November meeting following up on the June 9 meeting. And he started thinking about the meeting again at least at least as early as June 2, 2017, when Trump Organization lawyer Alan Garten reached out to him to learn more details about the meeting that Don Jr was denying ever took place. 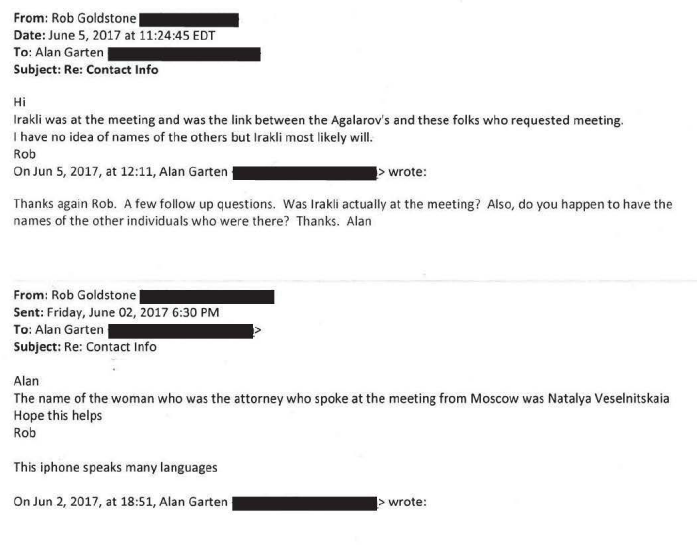 Goldstone’s silence on both those details in his WaPo profile puts his actions in much more favorable light than they really were. They hide how substantive the meeting was treated by both sides.

And I find all that pretty amusing given that Goldstone doesn’t name which Post reporter reached out to him in July 2017.

And the reason that’s important is because, at least according to Goldstone on July 9, 2017, his involvement in the meeting got leaked. 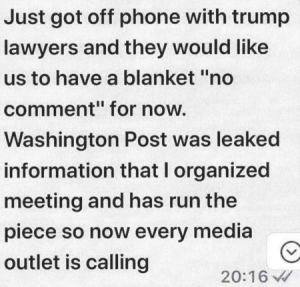 His insinuation to Emin Agalarov (in a comment that makes clear he spoke with Helderman, not Hamburger) was that the Trump people had leaked his name to preemptively blame the Agalarov side for misrepresenting the meeting.

Whether or not Goldstone is correct about who leaked his involvement is actually a fairly important detail in the investigation. In any case, the story of the mutual recriminations between the Trumps and Agalarovs really reveals how early both sides realized the meeting was going to cause real problems for the Trumps.

Which is all the more reason for journalists to be honest about where there are and are not leaks.