By July 18, 2017, Mueller Had Probable Cause Michael Cohen Was an Unregistered Foreign Agent

SDNY has released the warrants behind his April 9 raid, which are here. They actually include a series of warrants, showing how first Mueller got warrants, then handed parts of the investigation over to SDNY, which then obtained its own warrants tied to the crimes they were investigating. These two affidavits (one, two) are the ones showing that hand-off — basically SDNY asking, on February 28, 2018, for access to email accounts and storage devices that Mueller had already accessed. The second one describes Mueller’s first warrant on Cohen to be dated July 18, 2017. 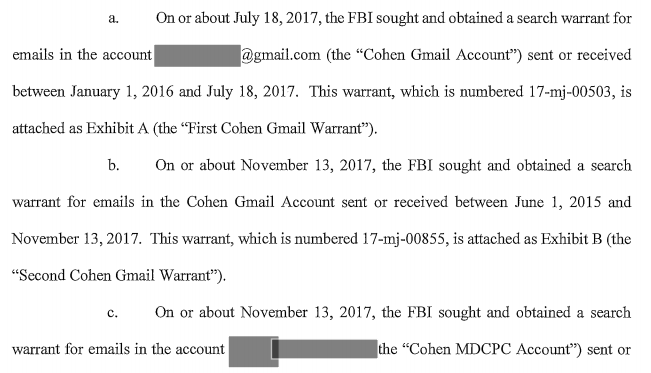 The same affidavit describes the crimes listed in the earlier warrants. Among those crimes — unsurprisingly — was conspiracy to defraud the US. More surprising, however, are 18 USC §§ 951 (acting as an unregistered foreign agent) and 611 (FARA).

The latter may be tied to Cohen’s work with a Kazakhstan bank (BTA Bank) and Korean airspace company (Korea Aerospace Industries) — which were basically his efforts to monetize his ties to Trump after the election. These were the deals that Republicans made such a big deal about when Cohen testified to the Oversight Committee.

In addition, Cohen was working for Columbus Nova, which was ultimately controlled by Victor Vekselberg. That would be of immediate concern for the question of Russian influence.

The 951 charge, however, is more interesting. It could relate to the same thing (basically arguing that because he was working for instrumentalities of foreign countries, he was their agent — basically a “soft” spy). Or it could relate to his efforts to negotiate a Trump Tower deal for Trump. Note that the November 13 warrant basically extended the first warrant back to June 1, 2015, which would we know would cover the Trump Tower deal (and precede any tie to BTA or KAI).

951 is a charge I always suspected might be used with Paul Manafort (it still might), or even Jared Kushner. But it appears that Mueller’s worries about Trump’s closest associates acting as spies wasn’t limited to Manafort and Flynn, but extended, too, to his personal lawyer. And Mueller already had evidence of that fact by July 18, 2017.