The Scope and Results of the Mueller Report

There’s a Twitter account, TrumpHop, that tweets out Donald Trump’s tweets from years earlier, which is a really disorienting way to remind yourself how crazy he’s been since he’s been on Twitter. This morning, it recalled that two years ago today, Trump was inventing excuses for having shared highly classified Israeli intelligence at the same meeting where he boasted to Sergei Lavrov that he fired Jim Comey a week earlier because of the Russian investigation. 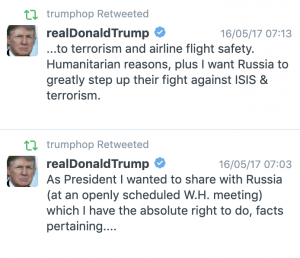 Two years ago, Rod Rosenstein — the same guy who stood, mostly stoically, as a prop for Bill Barr’s deceitful press conference spinning the Mueller Report one last time before releasing it — was in a panic, trying to decide what to do about a President who had fired the FBI Director to end an investigation into what might be real counterintelligence compromise on his part by a hostile foreign country and then went on to share intelligence with that same hostile foreign country. Tomorrow is the two year anniversary of Mueller’s appointment.

As I noted days after the Mueller Report was released, it is utterly silent on that sharing of information and two of the other most alarming incidents between Trump and Russia (though that may be for sound constitutional, rather than scope reasons) — Trump’s conversation with Putin about the subject of his own June 9 false statement even as he was drafting that statement, and the Helsinki meeting. That said, it cannot be true that Mueller didn’t consider those counterintelligence issues, because his treatment of Mike Flynn would have been far different if he didn’t have good reason to be sure — even if he deliberately obscures the reasons why he’s sure in the report — that Flynn, at the time under active counterintelligence investigation for his suspect ties to Russia, wasn’t entirely freelancing when he undermined US policy to offer sanctions considerations to Russia on December 29, 2016.

Nevertheless, a rising cry of people are suggesting that because we weren’t told the results of the counterintelligence investigation (whether it included the President or, because of constitutional reasons, did not), Mueller did not conduct a counterintelligence investigation. He (and, especially, FBI Agents working alongside him) did. Here’s what the report says, specifically, about the FBI writing up CI and Foreign Intelligence reports to share with the rest of FBI.

Mueller didn’t report on it, as he states explicitly, because that’s outside the scope of what he was required and permitted to report under the regulations governing his appointment, which call for a prosecutions and declinations report.

That’s just one of the misconceptions of the scope, intent, and results of the Mueller Report that persists (and not just among the denialist crowd), almost a month after its release.

The Mueller Report does not purport to tell us what happened — that would be a violation of the regulations establishing the Special Counsel. It only describes the prosecutorial and declination decisions. The scope of those decisions includes:

Two facts necessarily follow from Mueller’s limit in his report to prosecutorial decisions rather than describing what happened, both of which are explained on page 2 of the report (though even the Attorney General, to say nothing of the denialist crowd, appears not to have read that far). First, Mueller did not weigh whether Trump “colluded” with Russia, because that’s not a crime that could be prosecuted or declined.

In evaluating whether evidence about collective action of multiple individuals constituted a crime, we applied the framework of conspiracy law, not the concept of “collusion.” In so doing, the Office recognized that the word “collud[e]” was used in communications with the Acting Attorney General confirming certain aspects of the investigation’s scope and that the term has frequently been invoked in public reporting about the investigation. But collusion is not a specific offense or theory of liability found in the United States Code, nor is it a term of art in federal criminal law.

Because “collusion” is not a crime, Mueller could not weigh in one way or another without being in violation of the regulations underlying his appointment. Mind you, Bill Barr could have changed these reporting requirements if he wanted and asked Mueller to comment on “collusion.” He did not.

In addition, Mueller’s measure was always whether his investigation “established” one or another crime. But stating that he did not establish a crime is not the same as saying there was no evidence of that crime.

A statement that the investigation did not establish particular facts does not mean there was no evidence of those facts.

Mueller describes in very general way that he didn’t get all the information he’d have liked to weigh whether or not conspiracy was committed.

The investigation did not always yield admissible information or testimony, or a complete picture of the activities undertaken by subjects of the investigation. Some individuals invoked their Fifth Amendment right against compelled self-incrimination and were not, in the Office’s judgment, appropriate candidates for grants of immunity. The Office limited its pursuit of other witnesses and information–such as information known to attorneys or individuals claiming to be members of the media–in light of internal Department of Justice policies. See, e.g. , Justice Manual §§ 9-13.400, 13.410. Some of the information obtained via court process, moreover, was presumptively covered by legal privilege and was screened from investigators by a filter (or “taint”) team. Even when individuals testified or agreed to be interviewed, they sometimes provided information that was false or incomplete, leading to some of the false-statements charges described above. And the Office faced practical limits on its ability to access relevant evidence as well-numerous witnesses and subjects lived abroad, and documents were held outside the United States.

Further, the Office learned that some of the individuals we interviewed or whose conduct we investigated–including some associated with the Trump Campaign—deleted relevant communications or communicated during the relevant period using applications that feature encryption or that do not provide for long-term retention of data or communications records. In such cases, the Office was not able to corroborate witness statements through comparison to contemporaneous communications or fully question witnesses about statements that appeared inconsistent with other known facts.

More specifically, we know this language covers at least the following limits on the investigation:

Finally a more subtle point about the results, which will set up my next post. Mueller clearly states that he did not establish a conspiracy between Trump’s people and the Russian government on election interference. By definition, that excludes whatever coordination Roger Stone had with WikiLeaks (and even with the extensive redactions, it’s clear Mueller had real First Amendment concerns with charging that coordination). But whereas Mueller said that the contacts between Trump’s associates and Russians did not amount to a crime, he suggested that the two campaign finance issues he explored — the June 9 meeting and the release of stolen emails — were crimes but not ones he could sustain a conviction for.

The Office similarly determined that the contacts between Campaign officials and Russia-linked individuals either did not involve the commission of a federal crime or, in the case of campaign-finance offenses, that our evidence was not sufficient to obtain and sustain a criminal conviction.

The gaps in evidence that Mueller was able to collect strongly impact this last judgment: as he laid out, he needed to know what Don Jr understood when he accepted the June 9 meeting, and without interviewing either Emin Agalarov and/or Jr, he couldn’t get at Jr’s understanding of the dirt offered.

As I’ve noted repeatedly, it is absolutely false to claim –as Attorney General Barr did — that Mueller’s report says there was no underlying crime to cover up with Trump’s obstruction. Mueller specifically mentions SDNY’s prosecution of Trump’s hush payments to Stormy Daniels and Karen McDougal, a crime which was charged, and which was one of the explicit purposes behind the raid on Cohen’s home and office. And as such, that crime is pertinent to the pardon dangle for Cohen.

In January 2018, the media reported that Cohen had arranged a $130,000 payment during the campaign to prevent a woman from publicly discussing an alleged sexual encounter she had with the President before he ran for office.1007 This Office did not investigate Cohen’s campaign period payments to women. 1008 However, those events, as described here, are potentially relevant to the President’s and his personal counsel’s interactions with Cohen as a witness who later began to cooperate with the government.

But with regards to the Russian-related campaign finance investigation, Mueller describes that Trump may have believed those would be criminal.

[T]he evidence does indicate that a thorough FBI investigation would uncover facts about the campaign and the President personally that the President could have understood to be crimes or that would give rise to personal and political concerns.

The distinction about whether a crime was committed versus whether it was charged may be subtle. But it is an important one for the obstruction investigation. And as I’ll show, that may have interesting repercussions going forward.