I spend a lot of time complaining about what “TV lawyers” claim on TV and Twitter. In response, people often say that Harvard professors or former AUSAs of course must know better than me what the investigation looks like.

So I thought I’d bring receipts. I just got my quarterly bill for PACER, the shitty system via which one obtains court records for $.10 a page. Here’s what it looks like: 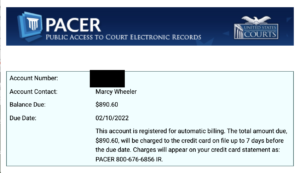 The reason I’m posting it is not to ask for donations — though as a reminder, this is my day job and we rely entirely on reader support to pay the bills; if you’d like to chip in I would love the support.

It’s to provide a sense of how big the January 6 investigation is and how much journalistic labor it takes to understand it. While January 6 is not the only case I’m following closely, it obviously dwarfs everything else.

According to PACER I paid to download 8,906 pages in the last three months; I downloaded a ton more (for free) from RECAP. While there’s a lot of boilerplate in the January 6 filings, I read most of them fairly closely, some of them very very closely. I did all that while also following a goodly number of the court hearings in the investigation (because of COVID protocols, I can do that from Ireland).

There are only a handful of journalists who are covering the investigation with this kind of attention — though I imagine Zoe Tillman, Seamus Hughes, Ryan Reilly, Politico collectively, and the rest of that handful have had huge PACER bills for the last year (Hughes always has huge PACER bills, because he spends hours extracting amazing stories from it, on all topics).

When TV lawyers tell you what there is or is not evidence in the January 6 investigation, you might ask them how many thousands of pages of court filings they read before they came to that conclusion. Because chances are very good they’ve read almost none of it.