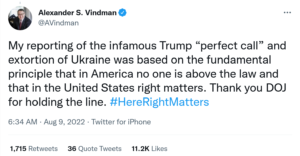 When Merrick Garland gave his brief press statement yesterday about the search of Mar-a-Lago, he had various audiences in mind. One was Donald Trump and his defenders, calling their bluff by announcing that the DOJ was moving to unseal the search warrant and list of items seized. Another was his own DOJ employees, to let them know that he had their backs and would support them when the rightwing attacked them. But as I listened to him, I thought that perhaps the most critical audience were the leaders of nations all around the globe — and especially the heads of their intelligence services. When hours later the story broke that some of the documents the DOJ were seeking were nuclear related, I dropped the mental “perhaps”. To build on one of Marcy’s previous posts, let me add that this is a huge foreign policy story, which is largely missing from the current discussion in the media.

Think back to the beginning of the Trump administration. On May 15, 2017, a disturbing story hit the news:

The intelligence . . . was supplied by a U.S. ally in the fight against the militant group, both officials with knowledge of the situation said.

H.R. McMaster categorically denied it, and as the story unfolded over time, McMaster was lying through his teeth. The unnamed ally was later revealed to be Israel, who had a mole inside an ISIS cell. And Trump blithely blew the cover of that Israeli asset by bragging to Lavrov.

Shortly after this meeting (at which Trump also bragged about just having fired James Comey), US intelligence officials made a bold move. From CNN:

In a previously undisclosed secret mission in 2017, the United States successfully extracted from Russia one of its highest-level covert sources inside the Russian government, multiple Trump administration officials with direct knowledge told CNN.

A person directly involved in the discussions said that the removal of the Russian was driven, in part, by concerns that President Donald Trump and his administration repeatedly mishandled classified intelligence and could contribute to exposing the covert source as a spy.

The decision to carry out the extraction occurred soon after a May 2017 meeting in the Oval Office in which Trump discussed highly classified intelligence with Russian Foreign Minister Sergey Lavrov and then-Russian Ambassador to the US Sergey Kislyak. The intelligence, concerning ISIS in Syria, had been provided by Israel.

And the damage was done.

A lot of the work of intelligence services is, if not cooperative, then transactional. “I have some information you would like,” says an ally to us, “and we’ll pass it along to you in exchange for something we need.” That favor might be us passing information back to them on another subject, or supporting some foreign policy objective. That favor might be immediate, or something later. Among the Five Eyes nations (US, UK, Australia, New Zealand, and Canada) and the major NATO allies, that relationship was formalized into regular practice.

But now, with Trump’s first foray into intelligence matters, all these countries worried about passing things along that under previous administration they never would have hesitated to share. With good reason.

Fast forward four years, past all the bizarre meetings with Russia where notes were not taken, past the stunning press conference in Helsinki where Trump declared he trusted Putin’s word over the word of his own intelligence services, past all the coddling of authoritarians, past all the threats to withdraw from NATO, past all the insults to our allies around the world . . . Fast forward past all of that, and there came November 2020. On the Sunday after the election, when Biden was declared the president-elect and foreign leaders began to offer their congratulations, the New York Times discussed the deeper reactions of European leaders to Biden’s election:

David O’Sullivan, former European Union ambassador to the United States, said he looked forward to a renewal of American leadership — if not the hegemony of the past, then at least “America’s role as the convening nation” for multilateral initiatives and institutions.

But the world has changed, and so has the United States, where the Biden victory was relatively narrow and not an obvious repudiation of Mr. Trump’s policies. A fundamental trust has been broken, and many European diplomats and experts believe that U.S. foreign policy is no longer bipartisan, so is no longer reliable.

Biden, with his decades of experience with foreign policy, knew this was true, which meant that two of his most critical appointments would be his Secretary of State and his CIA Director. For State, he chose Anthony Blinken, who had served in the State Department under President Clinton and on the White House national security staff in both the Clinton and Obama administrations, and for CIA he chose William Burns.

Burns was not a product of the intelligence community. He was a career State Department diplomat, but not just any diplomat. From 2001 to 2005, as the US reacted to the attacks on 9/11, Burns was the Assistant Secretary of State for Near Eastern Affairs — that is, the Middle East. From 2005 until 2008, as Vladimir Putin tightened his hold of the office of President of Russia following the chaos of the Yeltsin era, Burns was the US Ambassador to Russia. From 2008 to 2011, Burns held the position of Undersecretary of State for Political Affairs – the #4 position at State and the highest office reserved for a career foreign service officer. By the end of his 32 year tenure, he held the rank of Career Ambassador – the State Department’s equivalent to a four-star general.

Beyond running the CIA, the new director had to rebuild all those broken international relationships and restore that “fundamental trust” between the US and the world. That’s what made Burns such a great choice.

When the National Archives discovered classified information had not been turned over when Trump left office, they brought the news to the DOJ. I have this vision of Garland swallowing hard, and then arranging a meeting with Burns, DNI Victoria Nuland Avril Haines [corrected], and the other US intelligence agency heads to let them know what Trump had done. I can see the shock on their faces, followed by the “of course he did” sighs of resignation. Then the wheels start turning as each tries to figure out how this affects their agency.

But I also imagine Burns, either in the meeting or in a private conversation, telling Garland one thing: “I have no doubts about your department and your passion for justice. If there is anything I can do to assist, just let me know. I won’t press you to share things with me that you shouldn’t share — you do your job and I’ll do mine. But there’s one thing you need to know. You may already know it, but let me reinforce it. The. Whole. World. Is. Watching. Our allies are just beginning to trust us again, and how you handle this will determine whether that continues or is blown to bits. From a foreign policy perspective, especially on the intelligence side, we *have* to get this right.” That’s total fantasy on my part, but I’m reasonably confident that something like that was communicated, one way or another.

Two days ago, when the search was first revealed, Garry Kasparov tweeted, “For those who live where the law exists only to serve the powerful and oppress the rest–as I did in the USSR and Putin’s Russia–the dictum that no one is above the law is nearly awe-inspiring.”

And beyond our borders, the whole world is watching, as that Kasparov tweet indicates. It shows that Garland is reaching that worldwide audience, even before the word “nuclear” became part of the story.

In his long-ago testimony before Congress about that “perfect phone call,” Alexander Vindman captured in three words the essence of US foreign policy, and he repeated them as a hashtag in that tweet above. In the actions of the DOJ this past week, Garland is giving Vindman a big “Amen.”

I know we’ve got a fair chunk of readers outside the US, and I’d love to hear in the comments what you all are seeing in the coverage your countries.