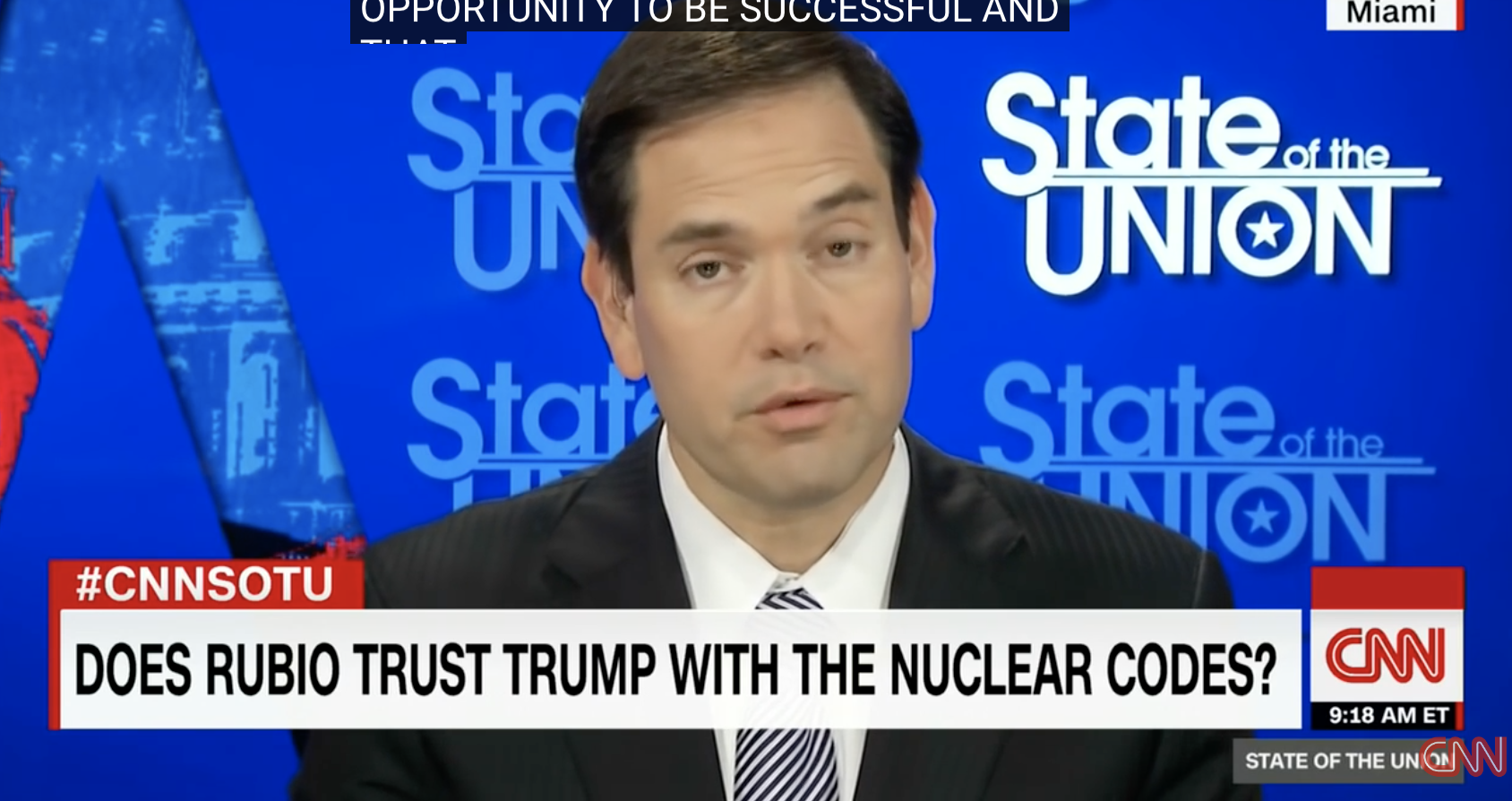 Classified documents relating to nuclear weapons were among the items FBI agents sought in a search of former president Donald Trump’s Florida residence on Monday, according to people familiar with the investigation.

Material about nuclear weapons is especially sensitive and usually restricted to a small number of government officials, experts said. Publicizing details about U.S. weapons could provide an intelligence road map to adversaries seeking to build ways of countering those systems. And other countries might view exposing their nuclear secrets as a threat, experts said.

It’s unclear whether this information is coming from investigators trying to demonstrate what a no-brainer this search was, people who’ve otherwise seen the Attachment listing items to seize, or from Trump’s camp in an effort to pre-empt damage from when this will be released. With few exceptions, most details made public about the search thus far have come from Trump’s side.

But the report that FBI showed probable cause to believe Trump was hoarding a document or documents pertaining to nukes has several significant legal and political implications.

First, it makes it far more likely that Trump has violated, and can be proven to have violated, part of the Espionage Act, 18 USC 793.

In my post describing the likely content of an affidavit justifying a search of the former President, I noted that somewhere in there, the FBI would have had to anticipate and rule out the possibility that Trump simply declassified these documents which, if Trump could prove it, would render the documents simply stolen documents covered by the Presidential Records Act.

But the fact that these are nuclear documents, under the Atomic Energy Act, Trump cannot declassify them by himself. They’re “restricted documents,” the one kind of document that’s true of. Here are threads by Kel McClanahan and Cheryl Rofer explaining the distinctions — even Chelsea Manning weighed in! As McClanahan likened it, nuclear documents are protected by two padlocks, and Trump only had the legal key to one of those padlocks. 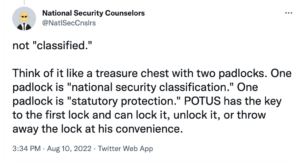 So by showing probable cause that Trump had stolen at least one document pertaining to nuclear weapons, FBI would accomplish that task: Trump could not claim to have declassified any such documents, because he cannot have declassified them by himself.

Now consider how it impacts Trump’s exposure under the Espionage Act. As I laid out here, to prove someone violated the Espionage Act, you don’t actually prove they were refusing to return classified information; you prove they had what is called “National Defense Information.” Even if Trump claimed to have declassified the documents, if the Agency in question (here, likely DOD or DOE) still believed the information to be classified and still treated as such, it could still qualify as NDI. But ultimately, a jury gets to decide whether something is NDI or not. One key difference between the first and second Joshua Schulte trials, for example, is that DOJ relied not on expert testimony to prove that he leaked or was trying to leak NDI, but rather on the logic of why the government would want to keep information about its assets secret. I thought it was one of the areas where the second prosecution was vastly more effective than the first.

There are few easier concepts to explain to a juror than that you need to keep information about nuclear weapons safe, and that doing so pertains to the national defense.

Then there’s the backstory. Early in the Trump Administration, there were reports that Trump had a scheme (one that involved all Trump’s sketchiest flunkies, including Mike Flynn) to transfer sensitive nuclear reactor technology to Saudi Arabia. The Oversight Committee conducted an investigation, the results of which, with the hindsight of Mohammed bin Salman’s $2 billion investment in a paper-thin Jared Kushner finance scheme and the Foreign Agent charges against Tom Barrack, look all the more suspect.

In 2017, President Trump’s son-in-law, Jared Kushner, orchestrated a visit to Saudi Arabia as the President’s first overseas trip. Mr. Kushner also met on his own with then-Deputy Crown Prince Mohammed bin Salman, who subsequently ousted his cousin, Mohammed bin Nayef, launched a crackdown against dozens of Saudi royal family members, and reportedly bragged that Mr. Kushner was “in his pocket.”

In October 2018, the brutal murder of Washington Post columnist Jamal Khashoggi was met with equivocation by President Trump and other top Administration officials. This month, the White House ignored a 120-day deadline for a report on Mr. Khashoggi’s killing requested on a bipartisan basis by the Senate Committee on Foreign Relations.

Within the United States, strong private commercial interests have been pressing aggressively for the transfer of highly sensitive nuclear technology to Saudi Arabia—a potential risk to U.S. national security absent adequate safeguards. These commercial entities stand to reap billions of dollars through contracts associated with constructing and operating nuclear facilities in Saudi Arabia—and apparently have been in close and repeated contact with President Trump and his Administration to the present day.

However, experts worry that transferring sensitive U.S. nuclear technology could allow Saudi Arabia to produce nuclear weapons that contribute to the proliferation of nuclear arms throughout an already unstable Middle East. Saudi Crown Prince Mohammed bin Salman conceded this point in 2018, proclaiming: “Without a doubt, if Iran developed a nuclear bomb, we will follow suit as soon as possible.”

When Congress passed the Atomic Energy Act, it imposed stringent controls on the export of U.S. technology to a foreign country that could be used to create nuclear weapons. Under Section 123 of the Act, the U.S. may not transfer nuclear technology to a foreign country without the approval of Congress, in order to ensure that the agreement reached with the foreign government meets nine specific nonproliferation requirements.

[W]histleblowers provided new information about IP3 International, a private company that has assembled a consortium of U.S. companies to build nuclear plants in Saudi Arabia. According to media reports, IP3’s only project to date is the Saudi nuclear plan. A key proponent of this nuclear effort was General Michael Flynn, who described himself in filings as an “advisor” to a subsidiary of IP3, IronBridge Group Inc., from June 2016 to December 2016—at the same time he was serving as Donald Trump’s national security advisor during the presidential campaign and the presidential transition. According to the whistleblowers, General Flynn continued to advocate for the adoption of the IP3 plan not only during the transition, but even after he joined the White House as President Trump’s National Security Advisor.

Another key proponent of this effort was Thomas Barrack, President Trump’s personal friend of several decades and the Chairman of his Inaugural Committee.

The nuclear energy scheme (which did not involve nuclear weapons, but implicated concerns that the Saudis would develop them) overlaps closely with the scope of the Foreign Agent charges against Barrack (and I don’t rule out that FBI’s focus on such document(s) stems, in part, from Barrack’s upcoming trial). One of the overt acts charged against Barrack, for example, is that he “forced” the Trump White House to elevate the treatment of MbS on a visit to the US in March 2017 beyond that accorded by his rank at the time.

To be sure: There’s not a hint of evidence that the government has reason to believe Trump tried to sell or otherwise share the documents he stole with foreign entities. If the government suspected Trump might do so with Restricted Documents covered by the Atomic Energy Act, it would implicate a different crime, 40 USC 2274, with which Jonathan Toebbe was charged last year for trying to deal such technology to Brazil. Trump has succeeded in obscuring the crimes listed on his warrant (though not all crimes need to be listed on the overt warrant), but if the Atomic Energy Act were implicated, that would be really hard to do (unless this leaked detail is an effort on Trump’s part to prepare for the mention of the Atomic Energy Act on the warrant, though I doubt that’s the case).

So for now, Trump’s past history of attempting to share nuclear technology with the Saudis for the profit of his closest advisors is just background noise: something that makes it all the more concerning he is suspected of stealing such documents. But if the FBI did not find nuclear documents they have reason to believe Trump stole, then that could change quickly.

Finally, there’s a political angle. The press has been absolutely remiss in calling out Republicans for their hypocrisy about classified information — or their irresponsibility in parroting Trump’s complaints about a serious breach investigation. Instead, the press treated the nation’s security as a he-said, she-said fight between political parties.

But the report that the FBI has reason to believe that Trump stole documents about nuclear weapons provides just the kind of horse race angle that seems to be the only thing that vast swaths of journalists can understand anymore. That’s because in 2016, Marco Rubio argued that Trump was “unfit for the Presidency” because we could not give the “nuclear codes of the United States to an erratic individual.”

Indeed, Val Demings, who is in a close fight against Rubio in November’s Senate elections, just made it an issue yesterday, before the nuclear angle became clear.

2016 Marco Rubio scoffed at the notion that someone like Trump should be given access to the nuclear codes. 2022 Marco Rubio — largely because he wants to win Trump’s favor in the election against Demings — doesn’t even want the FBI to investigate whether Trump stole the nuclear codes when he left office.

Perhaps with a horserace angle, the press might finally hold Republicans accountable for their irresponsibility of their efforts to protect Trump here.