Thanks to those who’ve donated to help defray the costs of trial transcripts. Your generosity has funded the expected costs of transcripts. But if you appreciate the kind of coverage no one else is offering, we’re still happy to accept donations. This coverage reflects the culmination of eight months work.

One of key piece of evidence to John Durham’s prosecution against Michael Sussmann are the notes that Bill Priestap took reflecting Baker saying that Sussmann, “said not doing this for any client.”

On the stand, Priestap remembered nothing about this meeting.

Baker, though, claims he remembers a bunch of things.

In response to Sean Berkowitz’s attempt to pin down his testimony the other day, Baker said that his meeting with Sussmann was thirty minutes long. That’s not actually a direct memory, it seems. It is one reconstructed, Baker says, from calendars and the chain of custody document.

Q. How long was the meeting?

Q. How sure are you of that?

A. I’m going from the calendar entries and the entries on that chain of custody document.

Q. Okay. Not from your memory? You’re looking at documents?

The chain of custody document shows that Baker took possession of the thumb drives at 2:30PM on September 19, 2016.

There are problems with relying on the chain of custody document to reconstruct your memory though, because it was, itself, reconstructed after the fact, the next day. One FBI agent discussing this process even joked that this amounted to “doctoring” the chain of custody — and with it, six years later, doctoring Baker’s current memory. 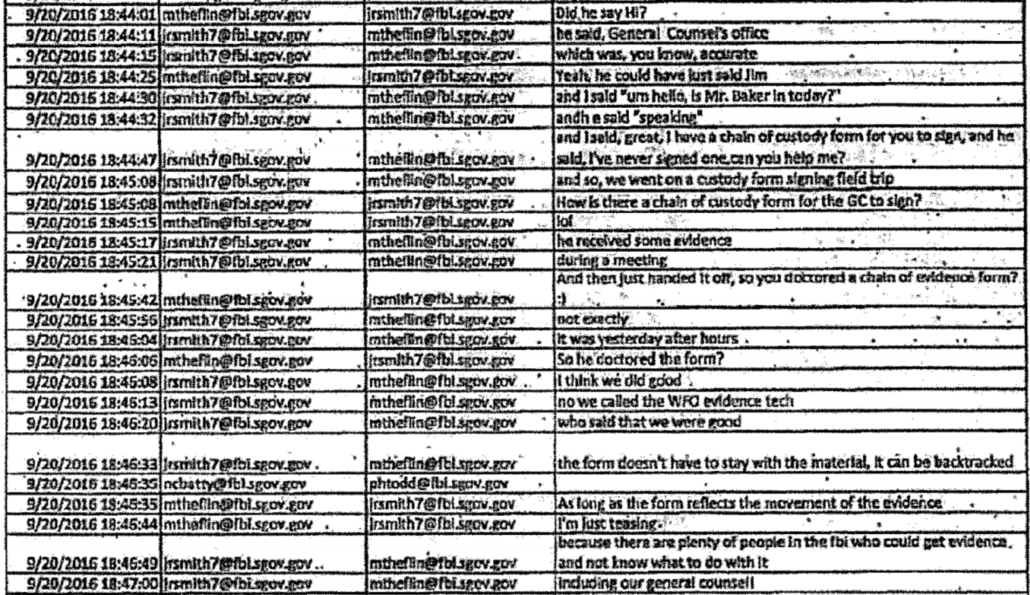 Q. Okay. Now, taking us back to our time period, 15 we’ve left you getting the information from Mr. Sussmann on the 19th, and you immediately or very close afterwards called Mr. Priestap?

And the meeting was ten or fifteen minutes long.

Q. How long was the conversation with Mr. Priestap?

A. I don’t think it was a very long conversation. Ten minutes, maybe, fifteen minutes, something like that. 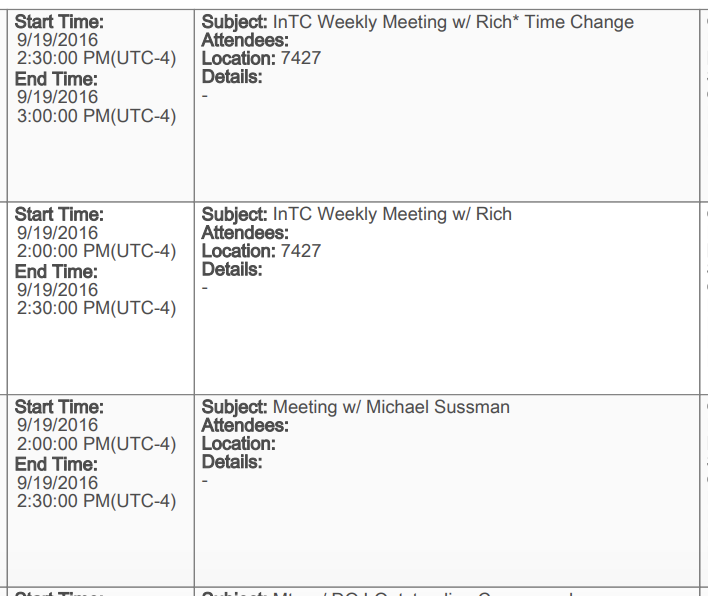 In fact, per his calendar, Baker was busy straight through until 4PM (though it’s unclear from Baker’s calendar precisely when the meeting with Rich happened). And the first Deputies Committee meeting after his meeting with Sussmann — which is the best explanation for Trisha Anderson’s notes — happened the next day, on September 20.

I haven’t yet seen how Sussmann’s lawyers got this into evidence yesterday (I’m still working through the morning transcript). But it’s possible that Baker never refreshed his memory with this calendar.

That’s because this calendar was extracted from Baker’s Samsung phone by DOJ Inspector General’s Office back in 2018. This is the phone that Durham had been told about in real time in 2018 (when Durham was investigating Baker for something else), but nevertheless didn’t think to look for the phone before charging Sussmann, and so only found it four months after the indictment.

When confessing all this confusion to Judge Cooper (as I explained in this post), Durham explained he hadn’t taken the basic investigative step of reviewing the contents of Baker’s phone before charging Sussmann because his memory didn’t go back four whole years — or even two, which is when Durham started interviewing Baker in this investigation.

Paragraph 10(a)(ii) states: “[I]n early January 2022, the Special Counsel’s Office learned for the first time that the OIG currently possesses two FBI cellphones of the former FBI General Counsel to whom the defendant made his alleged false statement, along with forensic reports analyzing those cellphones.” Id. The Government wishes to provide some additional context for this statement.

After reviewing the Special Counsel’s Office’s public filing, the DOJ Office of Inspector General (“OIG”) brought to our attention based on a review of its own records that, approximately four years ago, on February 9, 2018, in connection with another criminal investigation being led by then-Acting U.S. Attorney Durham, an OIG Special Agent who was providing some support to that investigation informed an Assistant United Attorney working with Mr. Durham that the OIG had requested custody of a number of FBI cellphones. OIG records reflect that among the phones requested was one of the two aforementioned cellphones of the thenFBI General Counsel. OIG records further reflect that on February 12, 2018, the OIG Special Agent had a conference call with members of the investigative team, including Mr. Durham, during which the cellphones likely were discussed. OIG records also reflect that the OIG subsequently obtained the then-FBI General Counsel’s cellphone on or about February 15, 2018. Special Counsel Durham has no current recollection of that conference call, nor does Special Counsel Durham currently recall knowing about the OIG’s possession of the former FBI General Counsel’s cellphones before January 2022. [my emphasis]

Durham forgot that he knew about the phone.

And because he forgot that he knew about the phone until it was too late, it’s not actually clear whether Baker’s reconstructed memory has faced the fact that he could not have had a 30 minute meeting with Sussman followed by a 10 minute call with Priestap and still made his 2:30PM meeting with Rich.

And given that both Baker and Priestap have testified, it’s probably too late to doctor a new memory to explain this all.