I’ve been trying to do my homework to catch up on the tremendous work done by Elijah Cumming’s House Oversight Committee on the Michael Flynn-IP3 scandal that I wrote about quite a bit back when we first learned about it. So far, I’ve found reports they issued on February 19 and July 29 of this year. One thing that stood out to me as I perused the timeline in the February report was the reminder that Westinghouse, the nuclear reactor company that was in Chapter 11 but figured prominently in IP3’s plans was purchased by Brookfield Business Partners, which is a subsidiary of Brookfield Asset Management. The Committee pointed out that while this purchase was still subject to approval, Brookfield Asset Management entered a contract to Jared Kushner’s white elephant property at 666 Fifth Avenue. Recall that Kushner owed much more on the property than it was worth, and by all rights it should have completely ruined Kushner financially.

The corruption of this situation is staggering in its brazenness. Here’s a New York Times article from July of 2018 that put it into full perspective:

Eighteen months into Jared Kushner’s White House tenure, his family’s real estate firm is deepening its financial relationships with institutions and individuals that have a lot riding on decisions made by the federal government.

In the latest example, an arm of Brookfield Asset Management is close to completing an investment of up to $700 million in the Kushner family’s tower at 666 Fifth Avenue in Manhattan. The deal will be a boon to the Kushners, who are struggling to recoup their investments in their flagship building.

At the same time, another Brookfield unit is awaiting the Trump administration’s approval of its acquisition of the nuclear-power company Westinghouse Electric. The deal is being reviewed by the Committee on Foreign Investment in the United States, made up of senior federal officials who consider the potential national security risks of transactions involving foreign companies. Brookfield’s headquarters are in Canada.

Looking further into just when each deal closed, we see the Westinghouse purchase closed on August 1 of 2018, while the Brookfield investment in 666 Fifth Avenue closed a mere two days later. Cummings’ committee obviously sees the craven corruption in the White House point person for Saudi Arabia having his largest financial failure bailed out just as soon as the government cleared the Westinghouse purchase that the folks who want to make a lot of money in Saudi Arabia through Westinghouse nuclear reactors being sold there. The Times article also sees this corruption, pointing out that the real estate deal was announced at the very time that government approval was still pending. That the real estate deal didn’t close until after Westinghouse seems to support that assistance on the approval was needed before Kushner would get bailed out.

But Kushner’s corruption is even more pervasive and more craven than that. For further background, I decided to look at the Times’ reports on Kushner’s financial statements for 2017 and 2018. The numbers that were announced were that in 2017, Kushner and Ivanka Trump declared joint income of between $82 million and $222 million. For 2018, that number “dropped” to between $29 million and $135 million. But it was when I first opened the article on the 2018 income that my jaw really dropped. Here is a partial screenshot of what I saw: 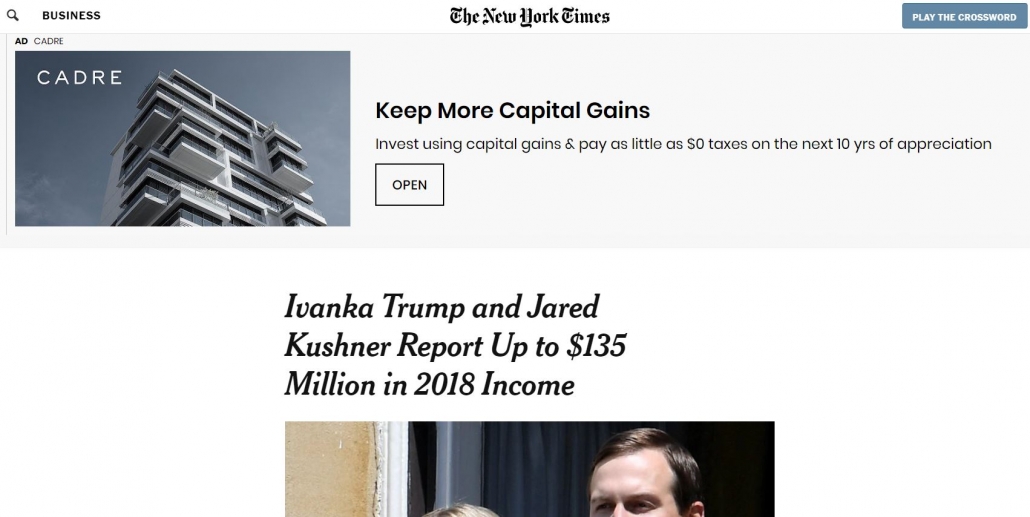 See the ad? What, you might ask, is Cadre, and how can it recruit folks who want to invest for 10 years and pay zero taxes? Well, Cadre is partially owned by none other than Jared Kushner. I had been looking at Cadre before I got to the Times article on 2018 income. So Google ads and the New York Times ad system worked together to assume I’d like to see Cadre if I’m looking into Kushner’s income. Jared Kushner’s corruption is so pervasive that even Google ads help you to see it when you look him up.